Some Personal Reflections on the Socratic Teaching Method 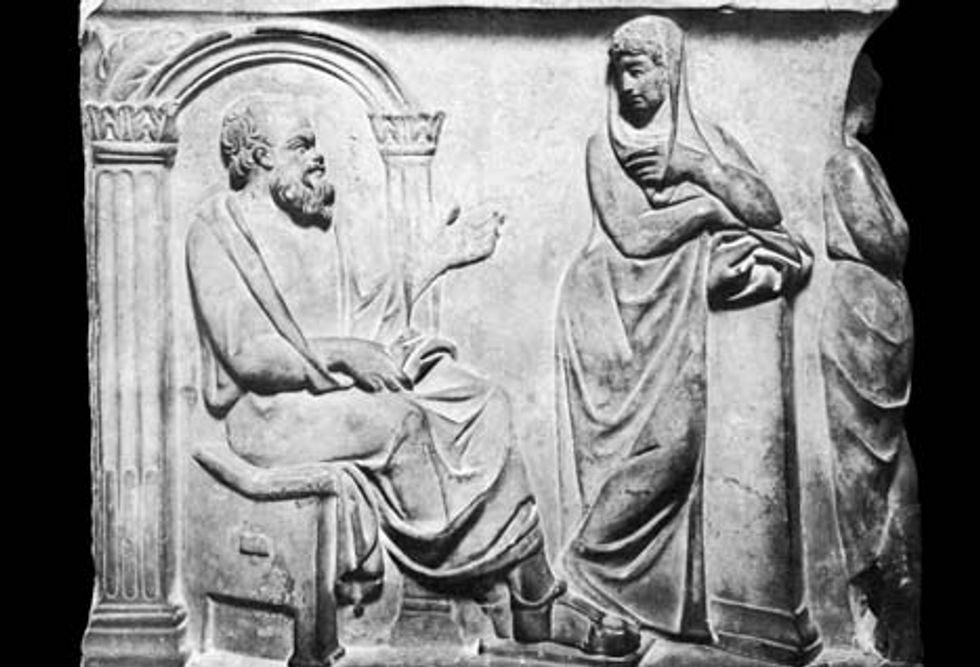 Martin Heidegger called Socrates “the purest thinker” in the West, which, I gather, doesn’t necessarily mean the best thinker. The sign of Socrates’ purity is not writing down his thoughts, for fear they would become ossified, misunderstood, vulgarized. What you say always depends on the character of the person to whom you are speaking. Books speak to no one in particular, violating the common-sense principle that your teaching style ought to vary according to the learning style of your student.

One trouble with taking the purely Socratic approach too seriously is really believing that a great teacher is one who leads his students to the truth dialectically, with no books or other “outside authorities” needed. We have no firm evidence that approach really worked that well for the “historical Socrates”--as opposed to the idealized character Socrates who shows up all the time in Plato’s dialogues (or really wordy plays). It is highly unlikely it really works for the teachers these days who pride themselves in using that teaching method. We even see in Socratic dialogues that his really smart interlocuters don’t have memories good enough not to be plain tricked by Socrates, who often reminds them about--by changing up--what he said before.

Now I don’t try to trick my students that way, although I constantly remind them how easy it would be to do. When I say "remember we just said," they know it’s because I’m saying something different--either because I screwed up before or to provocatively change my position for instructional or entertainment reasons. When I say "I have to take a controversial stand," I follow with a stand that nobody would find controversial at all. “I do think women these days should be able to work.” Or: “Slavery is just wrong.” What passes for my pedagogical intention is to show that professors who preen about “being radical” or offensive are usually being quite conventional. It would be genuinely radical to say in class: “Religious liberty makes most people more unhappy than they should be.” I do regularly put that the latter, genuinely thought-provoking opinion in the mouth of Marx, when talking about “On the Jewish Question.”

Another pedagogical point that I hope I make is that there are always limits to free speech. There are some things that Socrates dare not say straight out, like believing in the gods is stupid. But Plato does sometimes lead us to assume he must really think something like that. Once students make that assumption, it’s time to remind them that Socrates also taught that those who are proud of their atheism--the sophists--also stupidly thought they knew more than they really did. Socrates doesn’t make the mistake of feeding the sophists’ vanity and needlessly corrupting the already-arrogant youth by opening dissing the gods. He seems to use reason to make religion better.

It’s impossible to say everything you really want to say. A teacher has to think some about what his audience wants to hear. Socrates has to watch he says to the strong and idealistic young men in the Republic. He says, for example, he knows he can’t walk away without giving them some positive account of justice, even though he actually believes such a confident account is above even his pay grade. It would be bad for them, given their reluctant but real openness to tyranny. It would be bad for Socrates, who might get the stuff beaten out of him or have charges brought against him for impiety and corrupting the young. It would even be unfair to the young men. Socrates had “dialectically” taken the religious and poetic defenses of being just off the table.  Without saying more, he would have rendered them defenseless before clever sophists who believe that money and power are the bottom line. It was his responsibility to convince them it makes sense to be good, to be just, because tyranny and wisdom aren’t “on the same page.” No decent young person really wants to believe that money and power are the bottom line. And, you know, they aren’t.

So it’s always important to remind students that justice always imposes limits on free speech. The reigning view of justice is always somewhat tyrannical. As Socrates shows in the Crito, “the Laws”--the dominant view of who we are and what we’re supposed to do--always demand more of people than is reasonable. In American democracy, as Tocqueville insistently reminds us, there’s sometimes “the tyranny of the majority.” A secular liberal would add here immediately, of course, that that tyranny explains why American political leaders can’t be openly atheistic, and why President Obama had to feign being opposed to same-sex marriage until recently. A libertarian would add, of course, that’s why no politician can tell the truth that entitlements on which an overwhelming majority of Americans depend are unsustainable.

Socrates points out that the democratic prejudice is to exaggerate both the goodness and the real possibility of individual liberation. The “moral majority” is actually a popular prejudice against pure democracy; it’s the spirited and pious prejudice that produced the trial of Socrates. Pure democrats claim to be all about an easygoing acceptance of diverse lifestyles, including, of course, Socrates’. But radical democrats--meaning those who are extremists when it comes to “Doing your own thing” being the bottom line--readily get angry and vicious when it comes to those who say that freedom must be limited by virtue, by coming to terms with the responsibilities necessity--beginning with the necessities of birth and death--imposes upon us.

The argument over same-sex marriage today should be a reasonable and friendly discussion of the relationship between freedom and virtue. But it’s not: Party because even the Supreme Court says that all the words coming out of the mouths of those on one side of the discussion are motivated by animosity toward homosexuals as a class. That’s a conversation stopper, if ever there was one. Faculty members these days in mainstream institutions can only say what they please about same-sex marriage in class if they agree with the dominant view of sophisticated Americans--our “cognitive elite”--today. That’s not to say that view is wrong, but that it’s become a dogma.

It’s easy for me to be fair-and-balanced and acknowledge that most people on both sides of that issue and plenty of others are pretty dogmatic. Faculty members teaching at evangelical and seriously Catholic colleges have to watch what they say too, if they want to educate their students “from where they are,” not to mention avoid being fired.

But my last word is that professors, like Socrates, can’t really educate without taking into account the reigning dogmas, including dogmas that exaggerate our personal freedom, as well as dogmas about who God is and what he requires of each of us. Free speech that moves minds and hearts is always fairly tricky.