Panera Bread Is Getting Less Personal! 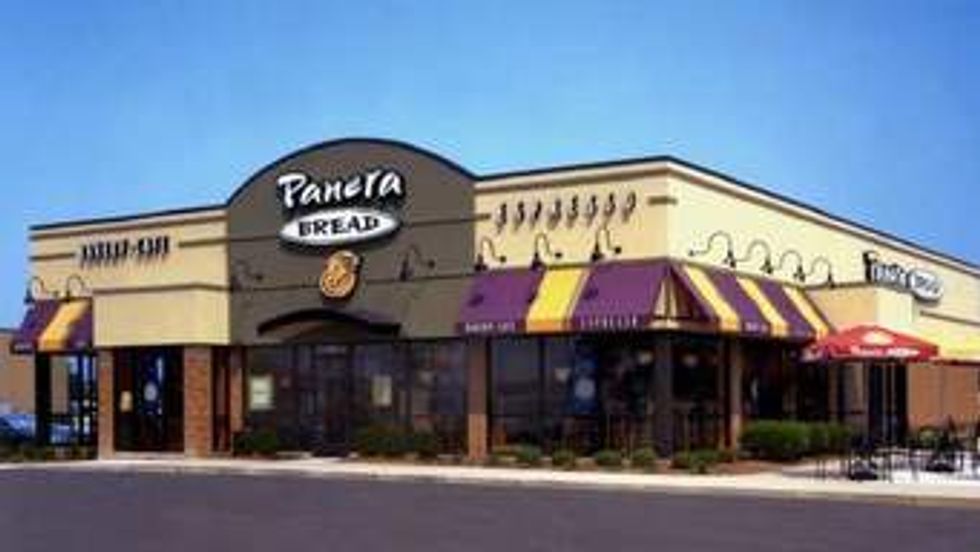 As I've said before, my home away from home is Panera Bread.  It has a fireplace with real gas logs, couches, and a leisurely and rather personal environment.  It's a lot like Cheers, but with beer replaced by coffee.  So it's not a place to escape from the wife and kids; they're as welcome as anyone.  It's is a place to bring your laptop or tablet or whatever and do your work, blurring, as so much of life does these days for we who do "intellectual labor,", the distinction between leisure or play and being productive. Cheers, of course, was a joyful respite from your job, and even Frasier couldn't take his "scholarly productivity" seriously with a buzz on.

I know, from talking to the people who work at Panera, how much of what the cashiers and so forth do and say is scripted from the home office in St. Louis.  But they still manage to be real people with whom you can have personal conversations.  And so I've found out how admirable those employees are, and how much they need their jobs.  I could tell you stuff about their spouses and kids and hopes and dreams.

But now Panera is replacing CASHIERS with KIOSKS.  Reasons:  There's a minor "slow-service" issue, which amounts, in my experience, to a five-minute wait on occasion.  Plus, sometimes real people get orders wrong.  That has happened to me at Panera, if pretty rarely.  The mistake, however, is always remedied promptly and cheerfully by a real peson.

This change I can't believe in is part of a pervasive techno-capitalist trend.  First, you reduce the work of a real person to a script, and then you replace the person by a machine.  The members of the "cognitive elite" who do mental labor at the corporate headquarters remove as much discretion and imagination from what the employees at a particular store do as possible.  Once their work becomes something like that of a cog in a machine, they can be replaced by machines.

The article says, not surprisingly, that other "fast-food" establishments are also replacing people with screens and operating systems--like those that make up a tablet.

We can see here why this and probably future economic recoveries will be jobless.  And why, as libertarian futurist Tyler Cowen predicts, more and more people will be thought of as marginally productive or not really productive at all.

Don't get me wrong.  I'm all for economic and technological progress.  But we have to be alert to personal costs and act accordingly.

I'm not saying the remedy comes from the kind of redistributive taxation recommended by the Marxist (who apparently never read Marx) du jour Thomas Piketty.  Piketty writes way too much from the moralistic point of view—not really shared by Marx—that the highly productive members of the cognitive don't deserve their money.  Money and what it can buy are, in fact, what they deserve.

But I might say that it's getting harder to justify low taxes and deregulation as empowering "job creators."

One libertarian responded to this article by saying that the real problem is the minimum wage.  Every time you raise it, the incentive is there is to replace costly people by discount machines.  If we paid people what they're worth in terms of productivity, employers would be more inclined to use more of them.  That's true to a limited extent.

But surely you wouldn't want to follow that line of thinking to the extreme Marx did.  He predicted that wages for most people would be reduced to subsistence and nothing more. They would be paid exactly what it takes to keep them alive.

The guys at Panera make a bit more than that.  But cutting their wages a bit really wouldn't save them from from being replaced by more reliable machines.

Consider that the most stunningly efficient and error-free operation around might be the Amazon warehouse.  I read somewhere that those warehouses used to have close to two hundred employees.  Now robotics have both increased reliability and productivity and cut the number of people working in the warehouse down to less than twenty.