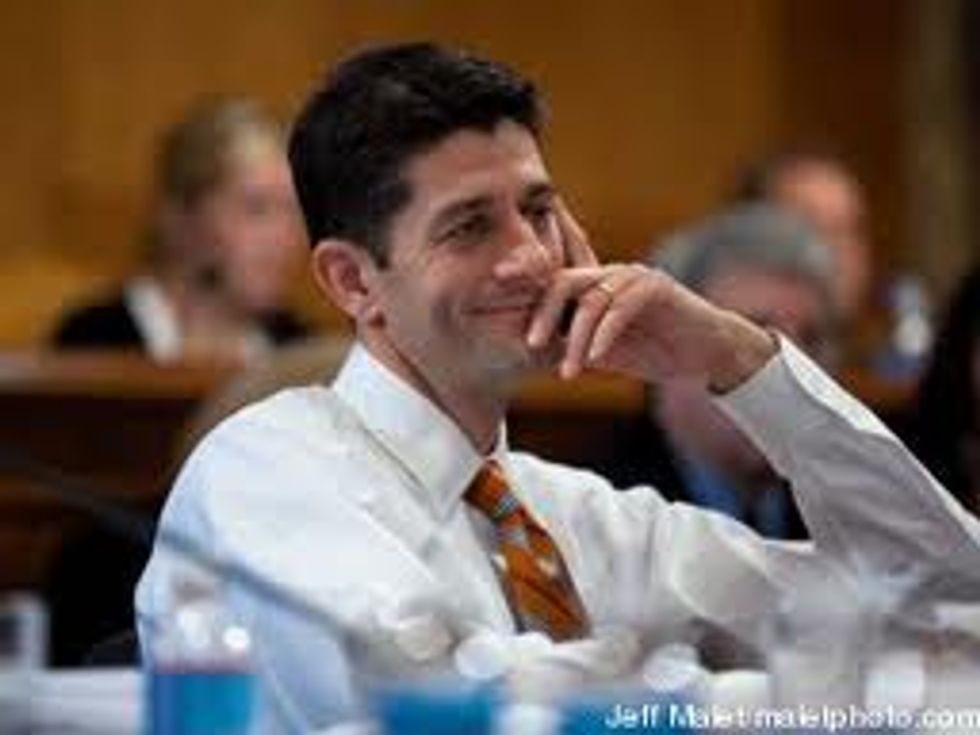 The Ryan pick may have been more bold than, say, the boring Portman or Pawlenty. But Romney had reached the obvious conclusion that the cautious approach isn't enough.  He wasn't going to win by using platitudes to supplement what he thought was obvious:  Obama's administration had failed us on the prosperity front.

Obama and his guys actually seem to agree they can't win by touting their record. So they had turned attention to Romney's record as a hugely successful businessman. That was easy to do, of course, because Romney himself has been claiming that that's the most telling part of his record.  The Bain Romney, the charge is, didn't care about the plight of the average working guy; profit was his bottom line.  And so we can't expect President Romney to care either.

I said on Friday, I'm sure you remember, that Romney needed to rekindle the Spirit of 2010 and show he's not merely a businessman, but a statesman.  His concern needs to be clearly the future of the country and the lives of all its citizens. He needs to be more than a can-do manger; he needs to be an encouraging and confident leader.

Well, Ryan is the man when it comes to that Spirit.  The Tea Party battle cries are echoed in Ryan's speeches all about rights not being a gift of government, but given to us by nature and God.  The future of our country is threatened because we've wandered away from that Founding insight.  The result is unsustainable debt, rooted in degrading dependency.  We need to stop trusting in Big Government, and start trusting in ourselves.

Ryan has never been a businessman.  Political ideas have been his whole working life.  His faith is in the "opportunity society" championed so eloquently (if rather ineffectively) by his always-optimistic mentor Jack Kemp.

So the mainstream media is already attacking Romney for his hypocrisy:  He's says business experience is SO important, and he constantly reminds us the president doesn't have any.  But Ryan hasn't met a payroll either!

Romney's obvious response is that the VP won't be governing.  I will be.  My experience will allow me to moderate Ryan's bold—often at least too much, too soon—ideas with an experienced appreciation of what will actually work.  Sure, Romney can say, I need Ryan's thoughtful advice, but I'm the guy who'll be in charge.

We can even see that, by taking Ryan out of Congress, Romney is actually enhancing his prospects for effective presidential leadership.  His proposed changes won't be as dramatic as what Ryan has recommended, and so Congressman Ryan could easily become his powerful rival and certainly a thorn in his side (or pain in his ass).  But VP Ryan will be a part of his team—a subordinate part!

The danger of picking Ryan, of course, is that the focus will now be even more off the President's record. It will move to the Ryan alternative.  That alternative, the mainstream media is telling us, is "too radical."  The president is itching to campaign on Ryan's ideas, as opposed to his own deeds.

It's true that, when it comes to employer-based health care, Social Security, Medicare, and so forth, most Americans are conservative in the precise sense.  They favor the status quo; they want to keep what they have.  They assume that the changes recommended by leaders in both parties will make their lives worse.

Lots of Americans—and much of the energy of 2010—oppose ObamaCare because they think, with good reasons, that it will ruin employed-based health care and gut Medicare.  And they often think, again not without reason, that they'll be worse off with the movement Ryan pushes from DEFINED BENEFITS to DEFINED CONTRIBUTIONS when it comes to entitlements.  After all, the movement from public and private pensions to 401(k)s isn't working that well.

Neither presidential candidate, so far, can handle telling the plain truth:  The present health-care and entitlement systems are unsustainable for a variety of reasons.  The most important, of course, is our so-called demographic crisis—too many old people and not enough young ones.

Putting Ryan on the ticket will probably have the effect of drawing both candidates out of their "comfort zones" into more candid and substantively contentious campaigning.  We'll see what happens.

There's a bit of comparing the pick of Ryan to the Palin choice as two desperate "game changers" (see HBO movie). On one level that's quite unfair.  Ryan was thoroughly vetted. Everyone knows he's real smart, quick on his feet, and knows a whole lot.

On other levels:  Paul and Sarah both young, fit, lookers, mavericks, believers, hunters, caring parents of more than two kids, charismatic, and loved by the base.  Nothing should scare the Democrats more than a male Palin who doesn't suffer from her "knowledge base" issue.