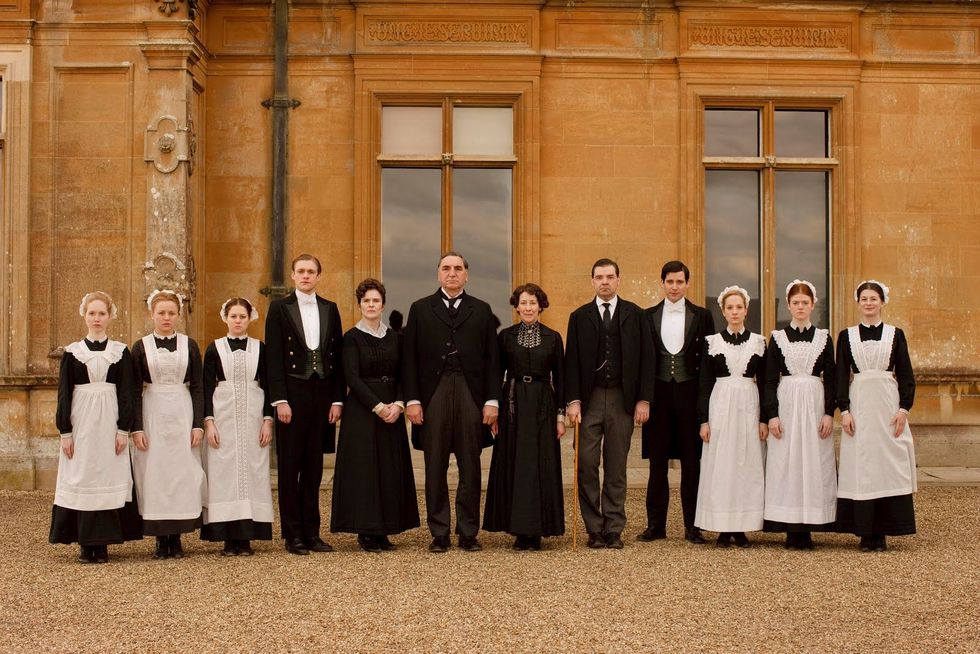 So what will you be doing Sunday night?  My advice:  Watch more TV!  Now you innovative and disruptive BIG THINK readers might think you don't have the time.  But that's only because you've forgotten about "multitasking."  Professors, for example, can be watching while grading papers and filling out assessment rubrics.  Some people listen to music.  I like the noise of conversation.

Professors of American politics and sociology and so forth should be required to achieve TV literacy.  It's the closest thing our country has to a common culture.  There's no way you've read the same contemporary books as your students.  And TV, after all, has gotten much better.  Well, some of it has. (There are also some new reality shows that are very interesting without being good—such as The Amish Mafia.)

On Sunday night, two shows in particular have won the favor of critics: Downton Abbey and Girls. Is it really possible to like them both?  One displays a way of life in which everyone knows his or her place and so knows his or her duties or relational responsibilities.  Everyone on Downtown Abbey has class—not in the nasty sense of oppressing and being oppressed, but mainly in the more positive sense of being classy.

The other show celebrates the liberation of people without class, who are on the tough journey of figuring out who they are and what they're supposed to do without much guidance at all.  On Girls, everyone seems to experience him- or herself as disconcertingly pro-choice when it comes to relational responsibilities.  So nobody would say that the characters are typically classy. We're reminded just enough that the girls' parents and just as clueless and emotionally disconnected as they are themselves.

From our view, both shows are critical commentaries on the creeping and sometimes creepy libertarianism of our time.  Downton is the anti-libertarian show, of course.  Girls exaggerates our libertarian tendencies so that we can see them more clearly.  It's hard to tell when its neon displays of who sophisticated young people are these days are celebratory, negative or at least ironic, or just descriptive in a value-neutral way.  We do see the toll liberation takes on love, and it's clear enough that the liberated opinions that love is for suckers or could be duty-free are held by the emotionally wounded and confused.

With the beginning of the new season last Sunday, we saw that Hannah on Girls has changed, although I assume it's not change we can believe in for long. She’s no longer the victim ready to have sex with anyone who’s ready to exploit her. She thinks of herself as through caring for others (which, of course, she never really did). She has contempt for the guy who used to exploit her because he’s bedridden with injuries (that were her fault) and is now needy both physically and emotionally. When says he loves her in a whiny way, she almost runs out of his apartment. She’s sleeping around with confidence and is at least fake-cheerful. And she refuses to allow her new main guy to even use “love” in a sentence when speaking of her.  She's says she's now all about calculation and good judgment when it comes to connections with others. She's having (emotionally) safe sex now.

So it's only appropriate that her new black boyfriend is all about reading The Fountainhead.  In the show's last business-like seduction scene Hannah only semi-jokes about wanting to borrow his Rand book.  She's really borrowed its outlook.  We see that deeply clueless Hanna has oscillated from one anti-relational extreme to the other—from victim to selfish (Randian) domination.  Maybe this self-obsessed move from one extreme to another is subversive commentary on libertarian nerve of our time.  It's not so clear she's really cured herself of her self-esteem problems.

Critics are excited that Hannah is now involved with a conservative. What could be more daring than that?  Lena Dunham, the real-life Hannah, has said that she couldn't be involved with someone who doesn't share her outlook on issues such as abortion rights. But it seems this guy does share her views. Although a Randian might vote Republican, he certainly wouldn't disagree with her on any right to choose.  From the view of a religious conservative or a traditionalist (Downton) conservative, this guy is no conservative.

On Downton,  we saw once again that when there’s a lapse in doing what one should, the men, especially, feel really guilty and reliably end up eventually doing the right thing, sometimes at considerable personal sacrifice, by others—both those whom one loves and those whom one either serves or commands. There’s a downside—a subtext—to the somewhat melodramatic goings on at the Abbey, but more on that later.

Some religious conservatives wish that the characters at the Abbey seemed more Christian.  It is clear that the Earl of Grantham and family own the local Vicar and don't value his spiritual guidance.  That may be commentary on the Church of England.  But it's also true that what's usually called Victorian morality was based on detaching the traditional code of conduct from its religious foundation.  It was, as English conservative Roger Scruton has explained, a kind of "first-wave" secularism.

Tomorrow night, join me in experiencing the thrill of the quick move from aristocratic class at 9 to Randian trash (talk, at least) at 10.  Let's see if you can handle the "multiple perspectives" in figuring out something about who you are and what you're supposed to do.