Happiness and the Pursuit of Happiness 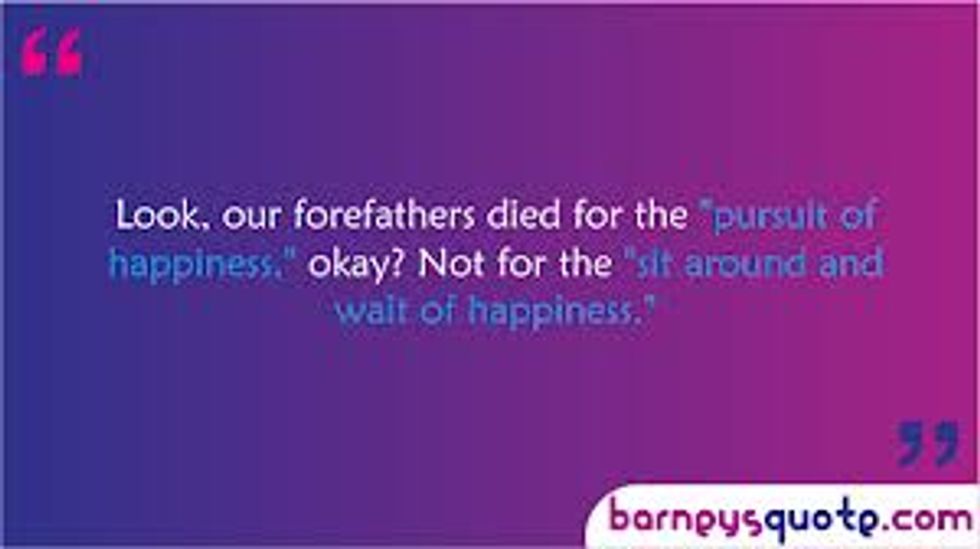 One of my favorite BIG THINKERS, Dave Berreby, criticizes our Declaration of Independence.  Here’s the Declaration’s theory:  We have the right to life, and we have the right to the liberty to use our lives to pursue happiness.  The pursuit of happiness must mean that happiness in the bottom line.  Happiness must be good for us.  But Dave has his reservations.  Here’s my spin on some of those reservations:

Happiness is most often the result of being virtuous, although, of course, there’s no guarantee.  Even the Declaration says we have a right to pursue happiness, not to be happy.  The right to happiness is the decadent product of  the “therapeutic” orientation of our time.  Old-fashioned psychology as self-discovery through candid conversation is replaced by the allegedly reliable result of mood-enhancing drugs.  But, big surprise!  The drugs don’t work.  The best way to feel good remains to be good.

The pursuit of happiness supposes that it’s better to be happy.  But data shows, Dave explains, that’s not really true; “experiments suggest that people in happy moods are more gullible, prejudiced and careless of detail than are their downbeat peers.”  In this respect, it seems like being happy really means being complacent or bovine contentment.  It means living a life free from restless pursuit.  To paraphrase  the legendary Dean Wormer from Animal House, being fat, stupid, lazy, and happy is no way to go through life.  And Mayor Bloomberg agrees.  But doesn’t that negative judgment depend on the cause of your happiness?   It might not be  true if your happiness is caused by your fulfillment of your relational responsibilities.  What about the happiness comes from having lots of children and raising them well?  That’s different than the apathetic contentment that allows you to ignore your kids while watching the game guzzling beer.

On the other hand, there’s little doubt that the feel-good high you get from listening to Mozart or reveling in some other uplifting work of art does lead, as Dave says, to making stupid  mistakes in ordinary life.  The “reentry problem,” as Walker Percy described, for those lost in thought is severe.  The problem with absent-minded professors is they’re happy being absent from everywhere but their minds.  Everyone knows they’re a significant risk factor.  Maybe we should make driving while listening to Mozart illegal, at least for those who are too addicted to his form of love.  This has implications for the Google campus:  As portrayed in The Internship, it’s all about providing happiness all around—from the music to the sleep pods to the free pudding and various  New Agey amenities.  Maybe “Googliness” shouldn’t even try to have anything to do with happiness.  Maybe the campus needs more Mahler and way-existential seminars on our misery without God and so forth.  Maybe Google should revert to the old-fashioned American work ethic, which separated productivity from happiness more clearly and honestly.

Happiness, Dave explains, often comes from thinking that we’re at home in the world, that my “inner state” has a comfortable niche in my external environment, which, of course, includes other people.  If I know that correspondence doesn’t really exist, then I’m unhappy.  But I also know I have to adjust—sometimes painfully—to the expectations of others in order to survive.  So it’s unhappiness that leads me to find a “collaborative” place in some workplace group.  But what therapeutic Googliness aims to do is to soothe you into believing that collaboration conforms to your “inner state,” and so adjustment isn’t painful, but natural.  But maybe more truthful and productively creative is the constant tension between individual desires and the good of the ad agency that animates the unhappy characters on Mad Men.

Not only that, it's the perception that our environment is fundamentally hostile to our desires—our being—that’s the foundation of the modern world’s techno-creativity.  I’m not going to adjust, by gun, I’m going to make my environment adjust to me.  Once we get too happy, technology stops galloping and starts to crawl.  Nobody, in a way, is less happy than the transhumanist, who won’t rest until he achieves total control over his being and his environment.  Those happy with less—those with the serenity that comes with acceptance—are fools.

But the philosopher who inspired Mr. Jefferson and his Declaration, John Locke, said it’s quite impossible for us free individuals to do anything but pursue happiness.  That’s what we’re hardwired to do.  Dave’s suggestion that we consciously pursue unhappiness won’t work for us. But Locke also says that our pursuit of happiness is really constant uneasiness.  We can’t rest content in enjoyment for more than a moment, and so our lives are constituted much more by the restless pursuit of happiness than actually being happy.  Restful enjoyment comes much more naturally to members of at least many of the other species.   And we’re often wrong in what we imagine happiness must be.  So the unconscious pursuit of unhappiness is pretty darn common.  Locke was as alive as Dave to the downsides of happiness,  but he didn’t confuse happiness with its pursuit.  Locke thought that a people devoted to the pursuit of happiness would be powerful and free, but happiness itself would remain elusive.