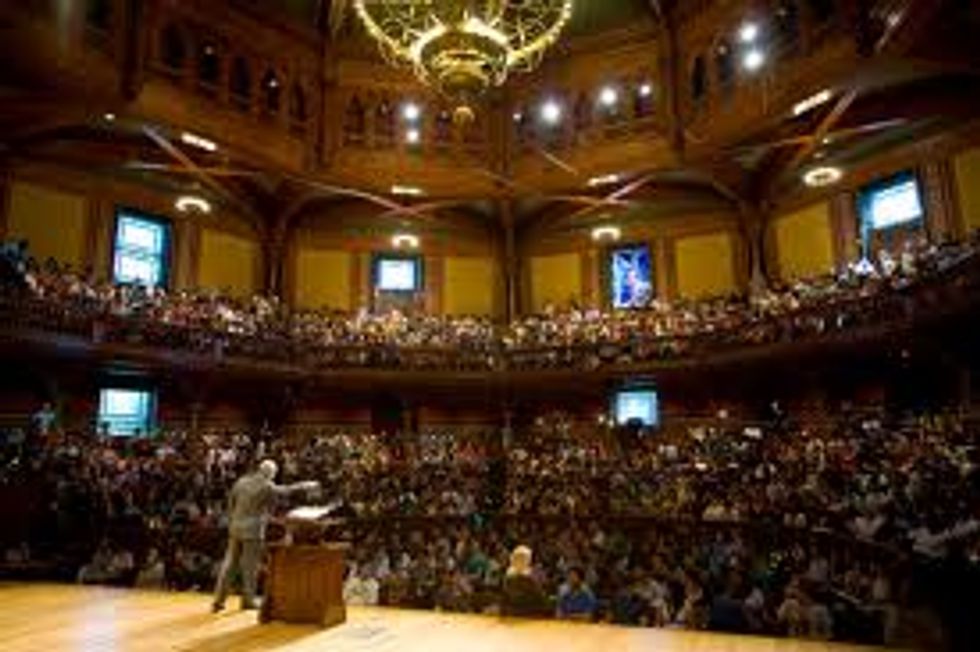 The BIG educational news today is that the mainstream expert journalist Thomas Friedman has certified that MOOCs are real.  And a quick bit of GOOGLING reveals that all the marketers of MOOCs are thrilled.

I don’t deny that it’s fascinating that a Harvard professor has become a media celebrity in Asia.  And surely listening to Sandel is a lot better than nothing when it comes to knowing more about justice.

But, you know, Sandel could potentially reach a much larger audience still through the book he wrote that roughly corresponds to his course.  And reading the book would be better, from an educational view, than listening to him talk.  I would even add that reading the book would dampen some of the audience enthusiasm.  It might be, from a genuinely Socratic view, that Sandel sounds better than he is.  And students, of course, would better able to think critically about what he has to say if they went on to read the books of the authors Sandel talks about—such as John Stuart Mill and Aristotle.

By preferring reading to talking, you might object, I’m not being genuinely Socratic.  Socrates, the purest thinker of the West, never wrote anything down for fear of his thoughts becoming calcified or distorted.  Education, we seem to learn from Plato’s Socrates, is about dialogue or conversation about questions that don’t have any certain or definite answers.

But Plato never shows Socrates talking from a stage—much less from a screen—to a thousand or more.  In Plato’s dialogues, Socrates is in a particular practical situation or predicament, and he’s challenged or called to account by both his friends and adversaries.  The conversation could only develop among a very small group of people who know each other and share very real concerns in common.

There’s not much Socratic about being on a stage and giving a lecture, even if questions are invited from an audience. It’s unlikely that questions from people he knows not at all could really challenge the media celebrity.

The irony of Friedman’s certification of the MOOC is that most of his article—and most educational expertise these days—mean to discredit the “traditional” method of education through lecturing.  It’s too passive for students, and it, I have to add, caters too much to the professor’s vanity.  It’s too much about the students spitting back what the authority says.

So Friedman eventually talks up the “blended” method of instruction.  The student watches, say, Sandel on his or her own time, and then the class itself is all about discussing Sandel or engaging in Sandel-inspired activities.

But why watch Sandel at all?  If “homework” is watching Sandel, then when are students supposed to read great or “real” books on justice?  Why not read Sandel or (to tell the truth), better, Plato or Aristotle or Locke or Kant or Tocqueville, and then use “class time” to discuss the reading?

For the class to be based on such discussion, it would have to be small.  And it wouldn’t be “pure” discussion, because the professor would have to provide guidance, context, and so forth.  Isn’t that what’s “traditionally” gone on at the best liberal arts colleges on, at least, the best of days?

The “blend” is reading and conversation, and no online dimension is required at all.

Friedman says that excellence will crowd out mediocrity in the educational marketplace.  I sure wish that were really true.  Isn’t the excellence we can really believe  found in the so-called great or “real” books, which are getting cheaper all the time?   And I’m all for KINDLES, NOOKS, and GOOGLE BOOKS etc. as ways of getting the word out.

Now I have to admit that the approach I describe is best for classes concerning truth, justice, virtue, and so forth.  Friedman mentions an excellent online course in accounting taught by a BYU instructor.  I have no reason to doubt that introductory accounting could be learned perfectly well that way.