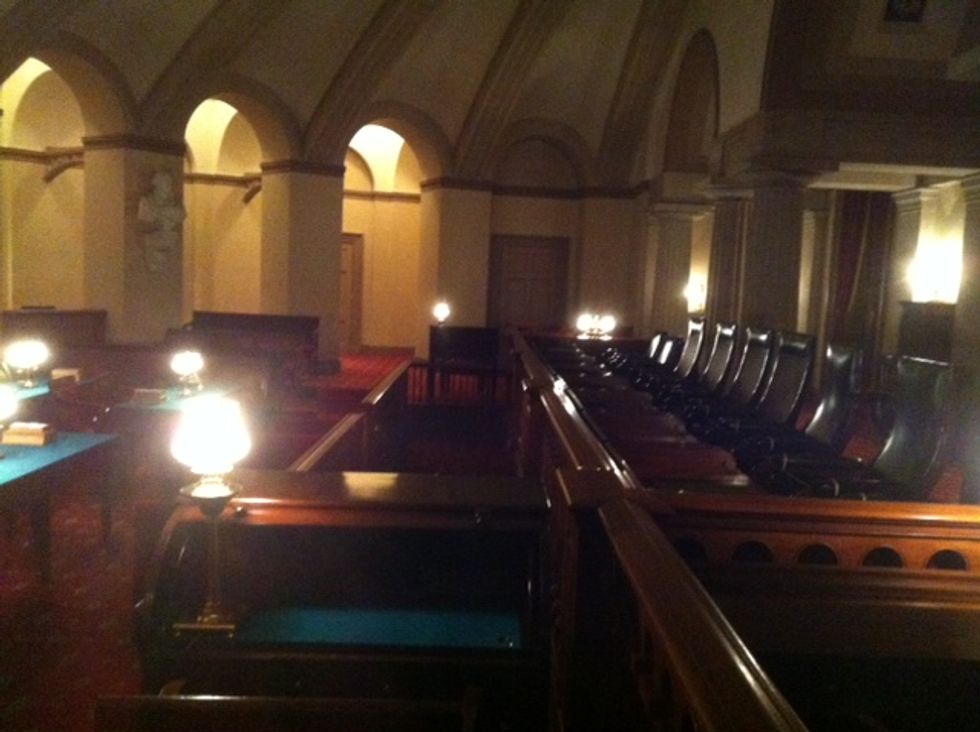 Professor Benjamin Ginsberg of Johns Hopkins, the nation’s leading critic of administrative bloat in higher education, has a modest proposal worthy of Jonathan Swift himself.

If we’re going to have the MOOC to cut costs, why not the MOOA—massive open online administrations—too? Instructional costs have going up—doubtless in part because of underworked and incompetent professors. But growth in size of administrations far exceeds that in size of faculties. And don’t get me started on administrative compensation!

What the MOOA promises is having “one experienced group of administrators make decisions for hundreds of campuses simultaneously.” That way each particular college could get rid of most of its administrators, just as the MOOC promises to allow each particular college to dispense with lots of its professors. If Michael Sandel can be teaching justice everywhere via MOOC, why can’t one vice provost be making decisions everywhere?

Now the obvious objection is that each campus has its own “issues” and own “mission.” So “one size fits all” won’t work when it comes to administrators. But Ginsberg explains that the way colleges have been doing business—and the way they’ve been describing what they do through homogenizing management-speak platitudes—has been in the service of eroding the genuine diversity that exists that distinguishes American higher education.

The idea of “best practices” really does suggest “one best size” for all campuses when it comes curriculum, planning, “diversity,” and so forth. One result is that college strategic plans are becoming more and more alike—with the same buzz phrases showing up predictably everywhere. Why not take this trend to its conclusion and have one master plan implemented by one administration?

And Ginsberg goes on to play with the emptiness of the “branding” experts which almost all colleges use (and pay big bucks for). I have had more than one administrator tell me that the liberal arts brand no longer sells, and what professors actually do has to be rebranded to be appealing to students, parents, and donors. The trouble with switching brands—or thinking in terms of brands—is that consumerist way of talking can’t help but influence what you actually do. And generally not in a good way, from the point of view of real education. Some colleges have found it expedient to keep the liberal arts brand while emptying themselves of said substance. But you can’t really surrender the brand and keep the substance.

A reform that could justify our current practice of separate, large administrations for each particular college would be, of course, to get rid of “best practices,” “branding,” and all the management-speak consultants and other experts on which colleges have mistakenly come to rely. That way of speaking and thinking, we can say, never “bubbled up” from the liberal arts or STEM faculties. And so maybe our administrators should be collaborating less with their fellow administrators and more with the faculty in their core disciplines.

I’m not saying both faculty and administrators aren’t self-indulgent and wrapped up in their own worlds. Faculty should really listen to the problems administrators face with more astuteness and sympathy too.

Once the focus is on the real issues—talked about in "real language"—then faculty and administrators can ally in pushing back the management-speak intrusiveness flowing from accrediting agencies and government bureaucracies.

It goes without saying that I'm partially exempting my Berry College—which has done pretty well in sustaining its own distinctive mission—from my critical comments.