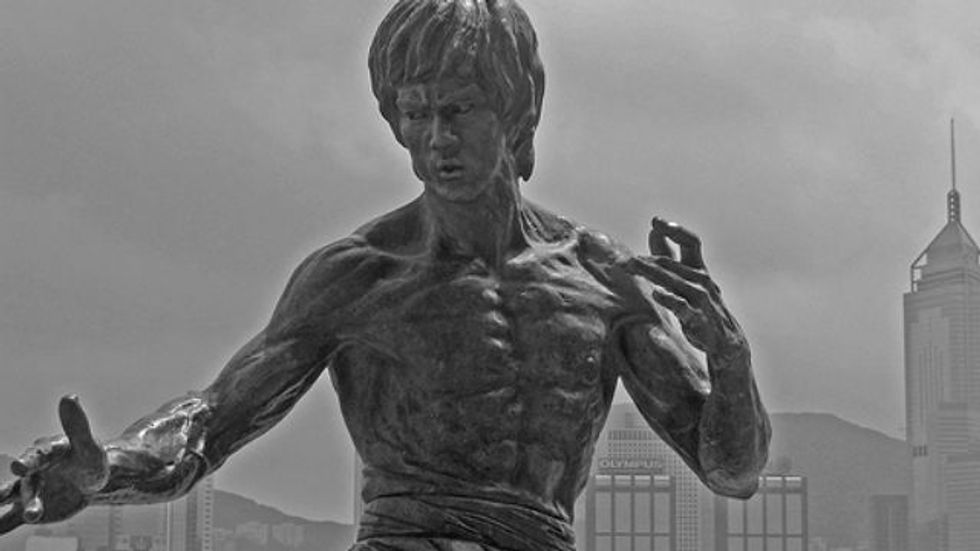 Sex symbol. Lethal weapon. Superstar. Chuck Norris dominator. Whatever epic descriptions we use to remember Bruce Lee, it’s hard to imagine this legendary martial artist once struggled in his career.

As a young man, Lee had envisioned a life for himself in America where he had a family, and taught martial arts, opening many schools across the country. But Hollywood found him instead—through a hair dresser (classic story), and after his role as Kato, the chauffeur to be reckoned with on the short-lived TV series The Green Hornet, ended when the show was canceled, he discovered that Asian men aren’t offered leading roles. At the age of 28, after the birth of his second child, Lee needed to make a big move to launch himself from minor TV star to the action hero he knew he could become.

How did Lee manage this transformation? According to his wife Linda Lee Cadwell in I Am Bruce Lee, the excellent new documentary directed by Peter McCormack, Lee took daily inspiration very seriously. Faced with an industry too cynical to recognize his talents, Lee relied on a vast library of motivational books, a daily diary where he wrote about his goals and evolving ideas, and studying Western and Eastern philosophies all like a diver relies on his oxygen tank.

The thinkers he favored included Laozi, a sage of ancient China who wrote the Tao Te Ching, Alan Watts, the British philosopher who popularized Zen in the West, and Jiddu Krishnamurti, the spiritual and philosophical writer from India who advocated psychological revolution, or, as Jimmi Hendrix said it, “In order to change the world, you have to get your head together first.”

To kick-off his transformation, Lee put his target down on paper. “My Definite Chief Aim,” he wrote by hand in January 1969 on a single sheet of paper, followed by the declaration, “I, Bruce Lee, will be the first highest paid Oriental super star in the United States. In return I will give the most exciting performances and render the best of quality in the capacity of an actor. Starting 1970 I will achieve world fame and from then onward till the end of 1980 I will have in my possession $10,000,000. I will live the way I please and achieve inner harmony and happiness.”

Lee had his defined goal, and his daily study of inspiration showed him the rungs to climb while hard work allowed him to take each new step. The result? Lee left California and went back to Hong Kong. Working with producer Raymond Chow, he shot two feature films—The Big Boss (released in 1971) and Fist of Fury (released in 1972)— in a small village in Thailand both for budgets of $15,000. They were Asian box office successes, and earned the attention of Hollywood.

Soon after, Enter the Dragon became Lee’s first big Hollywood film. During shooting in Hong Kong, Lee’s arsenal of integrated inspiration gave him the resolve to stake his career on fighting American film executives to insist on including more Chinese philosophy in the film. Lee won.

Then, tragically, his career was cut short when he died suddenly from an allergic reaction to a strong pain killer, and Lee never saw his first major film released. He lived long enough to become an icon of martial arts, of changing the image of Chinese men in the West, of challenging the system, and of teaching the world about self-expression through movement and philosophy.

“When I look around I always learn something, and that is to be yourself always, express yourself, and have faith in yourself,” Lee said. “Do not go out and look for a successful personality and duplicate him. Now that seems to be the prevalent thing happening in Hong Kong, like they always copy mannerism, but they never start from the root of his being and that is, how can I be me?”