Should Voters Have to Pass a Test Before Pulling the Lever? 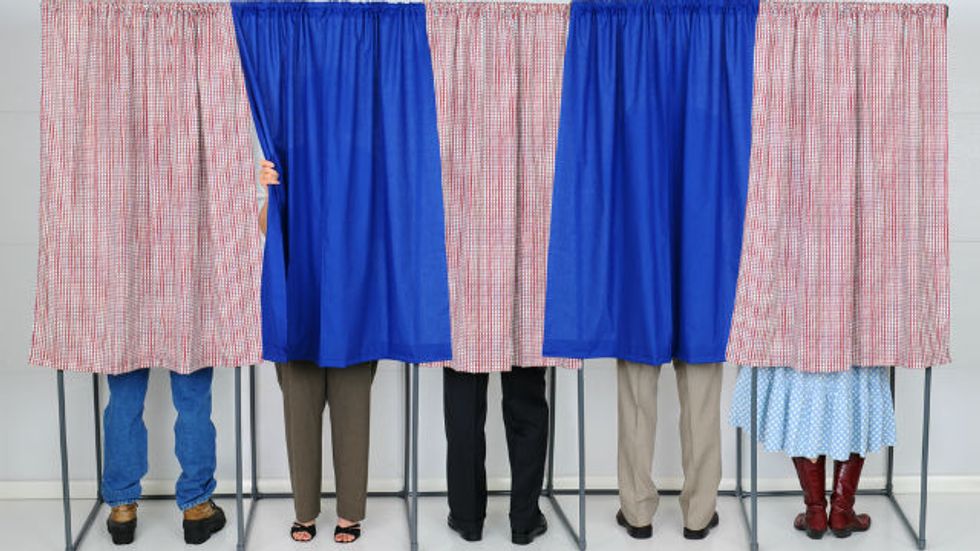 Six years ago, in a mock presidential election held in my daughter's pre-K class, Barack Obama was the clear winner. Of the 18 children, 16 voted for Obama. ("Superman" and "Mommy and Daddy" each received one vote; John McCain was shut out.) There is a good reason this was just a "mock" election: four-year-olds are not equipped to register an informed, rational perspective on who should occupy the oval office. But that raises a more difficult question: should only those adults who are informed and rational be trusted with the franchise? When Americans head to the polls one week from today, should they have to pass a test of voter competence as a condition for receiving a ballot?

In 2007, libertarian economist Bryan Caplan identified what he takes to be several pernicious biases that individuals tote with them into the voting booth and suggested that we the people are to blame for the mess that is Washington, D.C. Americans, he thinks, are irrational and vote accordingly. In addition to their wrong-headed views on economics, 64 percent of Americans are hard-pressed to name the three branches of government, and fewer than 40 percent can tell you which political party controls each house of Congress. What to do? Caplan begins with these suggestions:

But what — if anything — can be done to improve outcomes, taking the supremacy of democracy over the market as fixed? The answer depends on how flexibly you define “democracy.” Would we still live in a democracy if you needed to pass a test of economic literacy to vote? If you needed a college degree?

Since Caplan is asking, I'll give an answer: no. It is not consistent with any conceivable conception of democracy—a form of government founded on discussion and deliberation among free and equal citizens—to limit the franchise to college-educated, economically literate adults. The Supreme Court's rulings on access to the polls and the Federal Voting Rights Act of 1965 would certainly preclude these solutions. But Caplan isn't joking. Knowledge of basic economic principles and a college education would, he writes, “raise the economic understanding of the median voter, leading to more sensible policies." While literacy tests of yore were mere expressions of racism, Caplan urges us to consider the idea in a new light:

Franchise restrictions were historically used for discriminatory ends, but that hardly implies that they should never be used again for any reason. A test of voter competence is no more objectionable than a driving test. Both bad driving and bad voting are dangerous not merely to the individual who practices them, but to innocent bystanders.

A quick look at this analogy exposes its central flaw. Bad driving is objectively identifiable: if you drive over the speed limit, change lanes without looking or run a red light, you are breaking the law and can fairly be labeled a poor driver. But bad voting is harder to pinpoint—much harder. Partisans on either side can claim with equal justification that it's crazy to vote for candidate X rather than candidate Y. You can argue with your friend's decision to support a candidate based on his environmental record when, in your view, his terrible stance on corporate taxes disqualifies him from office. So it seems that voting mistakes are truly in the eye of the beholder.

Contrary to Caplan's claim on p. 52 of his book, errors of logic or misapplications of rules of probability are quite unlike votes based on misunderstandings of economics. Economists disagree among themselves, for one. And they can be quite spectacularly wrong. Consider the survey question on p. 77 as an example. "Over the next five years, do you think the average American's standard of living will rise, or fall, or stay about the same?" Economists answering this question were about 50% more optimistic that standards of living would rise than were members of the general public. But the Great Recession a year after the publication of The Myth of the Rational Voter sent the average American's standard of living south for the next half-decade. Economists, on this measure at least, were the true fools.

Despite his elitist disdain for a central principle of democracy—and his facile assumption that economists have all the right answers, all of the time—Caplan may still have a point. Voting does impact everyone, and bad decisions by an electorate will cause the entire polity to suffer. Maybe better informed and wiser voters entering the voting booth would have a positive impact on the country, or at least limit the damage. But imagine how things would go if voters were asked, on a Caplanian voter competency test, to draw a supply/demand curve, rehearse the advantages and disadvantages of outsourcing and identify the percentage of the federal budget that goes to foreign aid before they pull the lever. I shudder to ponder the passing rate such a quiz would yield. And I wonder how much better off we’d be if all voters really were screened in this way.

One of Caplan’s own contentions casts doubt on even a deflated hope that tests could improve electoral outcomes. Voters, Caplan claims, are “rationally irrational”: since individuals do not pay much of a price for their foolish political views, but love believing them and relish those "I VOTED!" stickers on their lapels, a cost-benefit analysis counsels in favor of holding on to them. It is rational (from a self-interested point of view) to be irrational about politics. The same isn’t true of shopping or driving. If you buy organic milk at the corner store for $6 when you could just as easily get it for $4 at the grocery store, you literally pay a price. If you drive recklessly, you risk getting yourself into an accident. By contrast, if you vote based on an “antiforeign bias” (that is, you “underestimate the economic benefits of interaction with foreigners”), say, you would experience your foolish, reckless voting as costless (since the marginal effect of your vote is so slight) while opting to deprive the polity of the advantages of trade with other nations. But no matter how deep your knowledge and how sophisticated your training in economic theory, your incentive to apply these smarts to your vote is effectively nil.

Beyond this, of course, the proposal is a non-starter politically. Whether or not the principle of one person, one vote is irrational according to Caplan, it is a very well entrenched principle of American democracy. Caplan seems to acknowledge as much when he moves on to an alternative proposal:

A more palatable way to raise the economic literacy of the median voter is by giving extra votes to individuals or groups with greater economic literacy. Remarkably, until the passage of the Representation of the People Act of 1949, Britain retained plural voting for graduates of elite universities and business owners....Since more educated voters think more like economists, there is much to be said for such weighting schemes.

I’m not sure how much more palatable this would be. In a country where anti-elitism and anti-intellectualism are campaign strategies, proposing extra votes for Ivy League graduates seems just as far beyond the pale as Caplan’s other suggestions. So that leaves Caplan’s mildest proposal: “reduce or eliminate efforts to increase voter turnout.” That's right: exactly the opposite strategy of Rock the Vote. Caplan might, then, applaud Republican efforts in several states to require voters to show photo identification, moves that will disproportionately disenfranchise many minority and left-leaning voters, including up to 600,000 in Texas.

But stripping so many people of the right to vote is blatantly inconsistent with the American political tradition of widening, not shrinking, the electorate. Caplan's inclinations are decidedly retrograde, and unfortunately he is far from alone this election season. Forces in Hong Kong and the United States alike are deeply suspicious of the capacity of voters, particularly those with limited resources, to register a rational preference at the polls.