Scalia was sitting right next to Clarence Thomas, the sole African-American justice, when he made these startling comments. 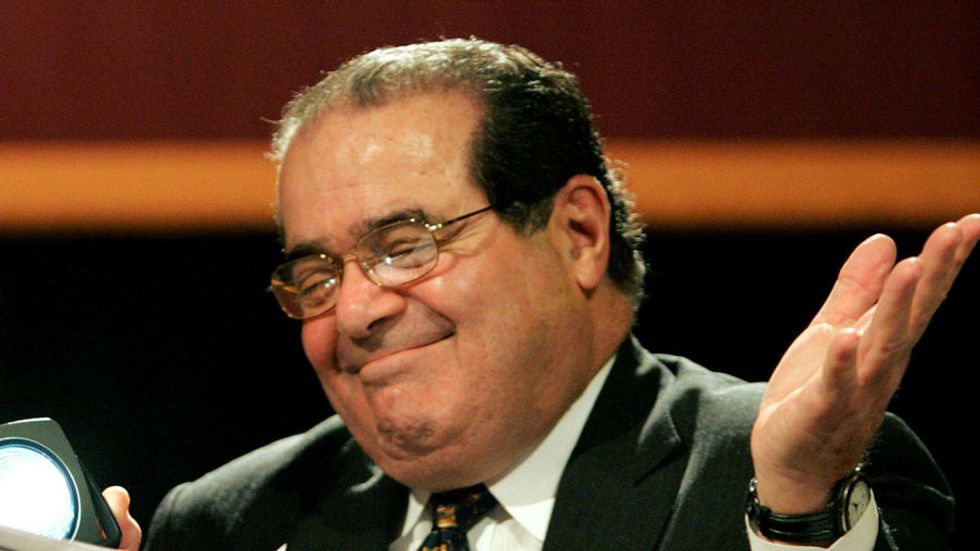 Antonin Scalia, one of the most conservative justices on the Supreme Court, attracts headlines for his legendary, incendiary dissents. He gives talks about gay rights that push the envelope of polite speech. And he is an animated questioner of lawyers during oral arguments, eliciting more laughter from the audience than any of his eight fellow justices.

But this week, Justice Scalia turned heads with some particularly troublesome comments about race. First, during a hearing about redistricting on Tuesday, he concocted a strange hypothetical scenario. Diving into a dispute about whether a commission drawing a state electoral map should be seen as illegitimate if only two of its five members had been motivated by partisan considerations, Justice Scalia offered this (springing from nowhere?) thought experiment: “Do you think if four of the justices of this Court voted a certain way in a case because they were racist, the opinion would still be valid because, after all, five of us weren't?"

An incredulous Justice Stephen Breyer promptly gave the back of his hand to his colleague’s statement. “I don’t know any court like that,” he said. He could have added that racist motives are usually well hidden, and, anyway, that there is no tribunal authorized to pronounce a Supreme Court opinion “invalid.”

But sometimes presumptions about race have a way of spilling out into the open, and on Wednesday, during the oral argument in an affirmative action case called Fisher v. University of Texas, Justice Scalia asked the university’s lawyer why boosting the number of black students at the state’s flagship campus is necessarily a good idea.

'I don't think the solution to the problems with student body diversity can be to set up a system in which not only are minorities going to separate schools, they're going to inferior schools.'

Greg Garre, the lawyer, was beginning to warn the justices of the consequences of killing off affirmative action. “Experience tells us,” he said, that minority enrollments will fall off precipitously if racial preferences are abandoned. Where voters have cancelled affirmative action, “diversity plummeted, especially among African-Americans ... at selective institutions in California, Berkeley, ... UCLA, ... and the University of Michigan.”

Here Justice Scalia piped up, in a strident voice: “There are those who contend that it does not benefit African-Americans to get them into the University of Texas where they do not do well, as opposed to having them go to a less-advanced school ... a slower-track school where they do well.” He then pointed to one of the amicus briefs in the case, presumably the one submitted by Richard Sander proposing the controversial “mismatch” theory, and misstated one of its contentions: “Most of the black scientists in this country,” Scalia said, “don’t come from schools like the University of Texas.”

Summing up, Justice Scalia suggested that classes at elite colleges are “too fast for them.” The University of Texas should rethink its desire to increase the presence of black students on its campus above percentiles in the low single digits. “Maybe,” he said, “it ought to have fewer.”

“This Court heard and rejected that argument, with respect, Justice Scalia, in the Grutter case, a case that our opponents have not asked this Court to overrule. If you look at the academic performance of holistic minority admits versus the top 10 percent admits, over time, they fare better. And, frankly, I don't think the solution to the problems with student body diversity can be to set up a system in which not only are minorities going to separate schools, they're going to inferior schools. I think what experience shows, at Texas, California, and Michigan, is that now is not the time and this is not the case to roll back student body diversity in America.”

Those were Garre's last words before leaving the lectern. Scalia had nothing else to say.

Image: UNITED STATES - OCTOBER 10: Kenya Battle, 17, a junior at Dunbar High School in Northwest, stands outside of the Supreme Court as the justices heard oral arguments in Fisher v. University of Texas case, which could limit affirmative action practices that colleges and universities use in admissions departments. (Photo By Tom Williams/CQ Roll Call)