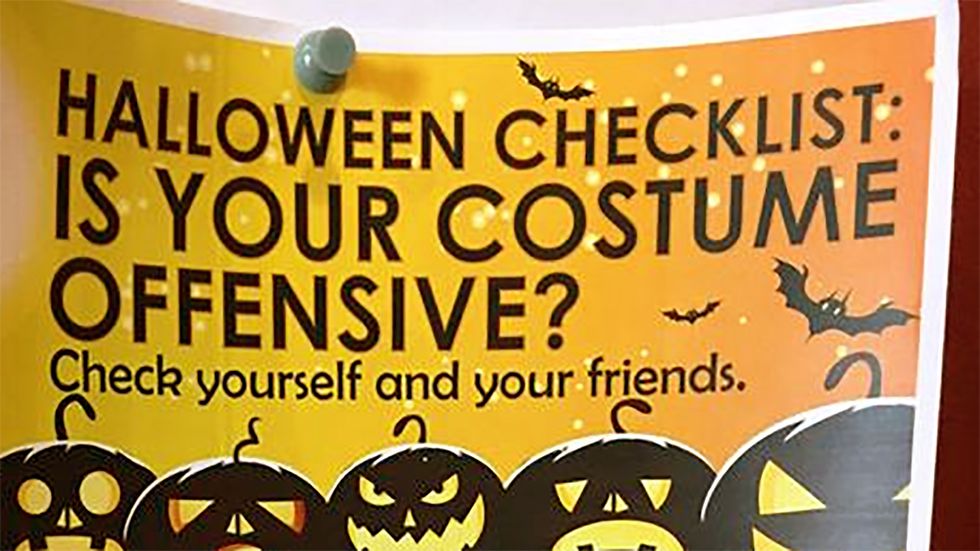 This weekend is Halloween, which means you have very little time left to get your costume together. But even if your plans are set, you might want to stop and think a moment before going out to trick-or-treat or attend a Halloween party. You’d better check yourself before you bedeck yourself.

The Office of Student Affairs at Wesleyan University is taking this idea particularly seriously. Posters pinned around campus ask students the question that titles this post, adding “check yourself and your friends.” Here’s the poster:

These posters are red, raw meat to the right-wing political-correctness-police; police whose favorite pastime is exposing liberal intolerance. At the National Review, Katherine Timpf flashed some italics-salted sarcasm in her incredulous reaction to the message: “After all,” she writes, “Halloween is a very serious issue, and can not be treated as if it were just some fun little holiday that’s a chance for people to use their imaginations and have some fun without taking each other too seriously.” The campus “costume sensitivity consultants” want to spoil Halloween for 19-year-olds everywhere. Michele Hickford was even more aghast: “OH, PUH-leeeze,” she phoneticized. “[T]he PC crowd finds a way to ruin EVERYthing.”

The posters do seem a tad overblown. But it’s wrong to suggest that the impulse behind them is completely without merit. Just a few years ago, some white students at Northwestern University in Evanston, Illinois, thought it was a good idea to wear blackface on Halloween — a trick that sparked campus-wide soul-searching. All Saints’ Day may liberate people to adopt the face of a new identity for a day or a night, but transgressing boundaries has its moral limits, and race-switching is clearly beyond the pale.

The poster’s admonition to think again about a costume that “[mocks] cultural or religious symbols such as dreadlocks, headdresses, afros, bindis, etc.” is mostly well taken. Yet it is not clear that donning an unfamiliar costume necessarily implies mockery of the people who are more accustomed to wearing it. And there seems to be a distinction between adopting the skin tone of a disenfranchised minority and wearing, say, Indian garb for a day. A few years ago, my wife and I borrowed an Indian dress and a kurta from friends when attending an Indian wedding, and the other guests were welcoming, not offended, by our clothing. It’s possible to join a culture for a day without violently appropriating it or mocking it.

No Van Gogh (whose mental illness led him to shoot himself at 37)? No Virginia Woolf (who was bipolar and drowned herself at 59)? Suddenly the proscribed list of characters seems very long indeed — untenably long.

The other two examples of problematic costumes in the Wesleyan poster raise more questions. I have a hard time imagining a costume that constitutes an “attempt to represent an entire culture or ethnicity.” What would such a get-up look like, exactly, and why would an onlooker assume that the costume is designed to reduce Chinese people, say, to a stereotype?

And what kinds of costumes are guilty of “trivializ[ing] human suffering, oppression, and marginalization”? Are Mao or Lenin costumes out of bounds? Is the Dalai Lama too holy, or too persecuted, to portray? The verboten examples provided are portraying “a person who is homeless, imprisoned, a person with disabilities, or a person with mental illness,” but these all have quite distinct meanings. It would be tasteless to dress up like a Syrian refugee or a hurricane victim. But what about famous figures (fictional and real-life) like Charles Manson or Nurse Ratched? No Van Gogh (whose mental illness led him to shoot himself at 37)? No Virginia Woolf (who was bipolar and drowned herself at 59)? Suddenly the proscribed list of characters seems very long indeed — untenably long.

The Wesleyan poster and similar posters on other campuses are well-intended; they are not the Orwellian nightmares that right-wing pundits portray them to be. Yet the poster campaigns do seem to suffer from a rather simple-minded conception of the proper ethical limits of masquerade. The discussion is much more nuanced than a simple check-list could capture. And there is something uncomfortably paternalistic about the tactics involved. One would hope that college students are a little more sophisticated than this. Relying on tacked-up costume rules can’t do much to develop sensitivity and a moral compass in college-aged students. Nineteen-year-olds might be more reflective and responsible if they were left on their own to decide how to dress up on Halloween, perhaps with a very general reminder that cultivating community on campus relies on an awareness of how our actions affect other people.

Steven V. Mazie is Professor of Political Studies at Bard High School Early College-Manhattan and Supreme Court Correspondent for The Economist. He holds an A.B. in Government from Harvard College and a Ph.D. in Political Science from the University of Michigan. He is author, most recently, of American Justice 2015: The Dramatic Tenth Term of the Roberts Court.