A Logic Puzzle That Teaches a Life Lesson

Here are a couple classic logic problems, updated for the digital world. 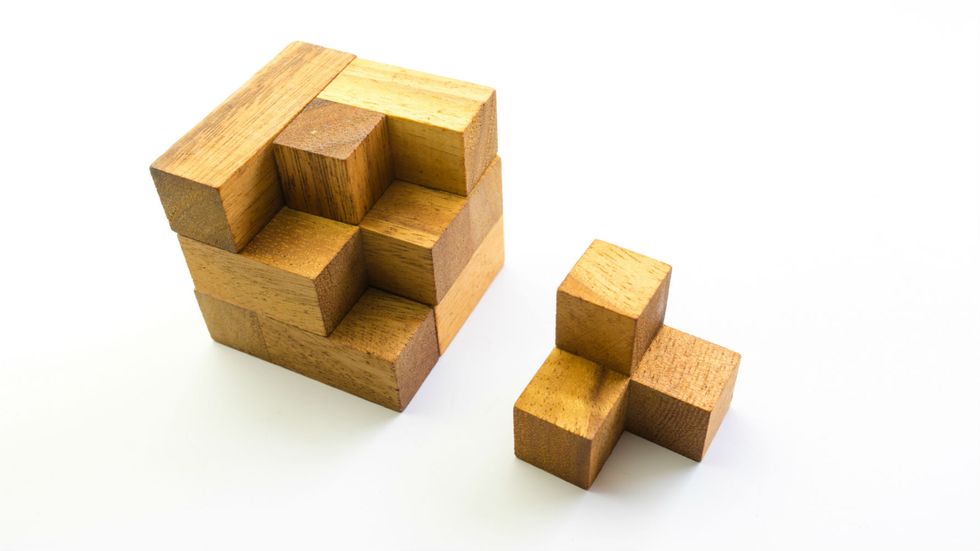 Before we get to the brain teaser of the day — which does, as the headline indicates, carry a deeper meaning — here is a classic logic problem, updated for the digital world, to get you warmed up:

You find yourself in a dark chamber with two closed doors — one leading to bliss, the other to death, though you do not know which door is which. Two charged and ready iPhones — one programmed with Honest Omniscient Siri, the other with Lying Omniscient Siri — sit on a low table. (Honest Siri always tells the truth; Lying Siri always lies.) But the phones appear identical, and, again, you have no idea which is which. You must choose a door, and you are given permission to ask one of the phones a single question to help you make your decision. What question do you ask?

Tough one, right? Sweating a little? It would be easy as pie if you could ask two questions: one to establish which is Honest Siri (e.g., “What’s my name?”) and then one directed to Honest Siri to determine which door leads to bliss. But no such luck. You need to ask a single question with no idea which phone is the trustworthy one. Make it a good one.

Because your question needs to yield valuable information no matter whether you happen to address Honest Siri or Lying Siri, it should be a question that will give you the same answer no matter which phone you chanced to pick up. So here we go: “If I asked the other iPhone which door leads to bliss, what would Siri tell me?” Honest Siri will point toward the death door, which is what Lying Siri would in fact indicate. Lying Siri would point toward the death door as well, which is the opposite of what Honest Siri would tell you if you asked her directly. So you find out what you need to know about the doors without having to figure out which phone is which. Now that you know which is the door to your demise, you can open the other door with confidence that bliss awaits you on the other side.

In this problem, known as the two guards riddle, everything depends on several pieces of information you assume to be true: The doors really lead to divergent fates and one phone always lies while the other always tells the truth. But in the real world, such conditions are always subject to some degree of doubt.

A new puzzle from programmer Mark Dominus plays on this inevitable uncertainty, and contains a valuable lesson. He calls it the “annoying boxes problem.” Here it is:

There are two boxes on a table, one red and one green. One contains a treasure. The red box is labeled "exactly one of the labels is true." The green box is labeled "the treasure is in this box."

Can you figure out which box contains the treasure?

a. The treasure is in the red box

b. The treasure is in the green box

c. There is not enough information to determine the answer

What was your answer? Before I share the correct solution and an explanation thereof, here is the rundown of how 506 people voted in early July when Dominus first posted the puzzle:

So if you said the treasure is in the red box, you are in good company: About two-thirds of respondents chose (a), by far the most popular response. But if you selected option (c) — not enough information — you arrived at the correct answer. But here’s the kicker: The treasure was in the green box. How could that be? Here is how Dominus explains the apparent contradiction:

If you said the treasure was in the green box, you were right, but you got the logic puzzle wrong. As Dominus points out, the question asks whether you can figure out which box the treasure is in. And the answer to that question is no. No points for lucky guesses.

If you selected (a), like most respondents, you might wonder why you’re wrong. Dominus goes into detail in his post, which you can read here. For me, the most interesting point Dominus makes comes in his explanation of why it’s a mistake to read too much (or to read anything, actually) into the labels on the boxes. They are “red herrings,” he writes, and are “worthless”:

[I]n the absence of additional information, there is no reason to believe that the labels give any information about the contents of the boxes, or about labels, or about anything at all. This should not come as a surprise to anyone. It is true not just in annoying puzzles, but in the world in general. A box labeled “fresh figs” might contain fresh figs, or spoiled figs, or angry hornets, or nothing at all.

The boxes puzzle is “annoying” because it unsettles our predilection to place faith in truth claims and use them as anchors when solving a puzzle—or navigating the world. But jogging our tendency to rely on labels is a valuable public service. Labels can mislead; they can confuse; they can be crafted to manipulate you to do something you wouldn’t otherwise do. Have you ever clicked on a link with an especially alluring headline that didn’t quite deliver? Selected a product labeled “all natural” at the grocery store without knowing whether it was really any healthier? Bought a sunscreen based on its stated sun-protection factor (SPF) with no idea what that really means?

We have no choice, but to rely on labels, of course. Radical skepticism about every label is a prescription for paralysis. But it’s still advisable to keep up our guard in the face of labels that seem outlandish, unlikely, inconsistent, or too good to be true — and Dominus’ annoying little logic puzzle is a nice reminder of that.