A World Without Leadership: Ten Questions with Ian Bremmer (Part 1) 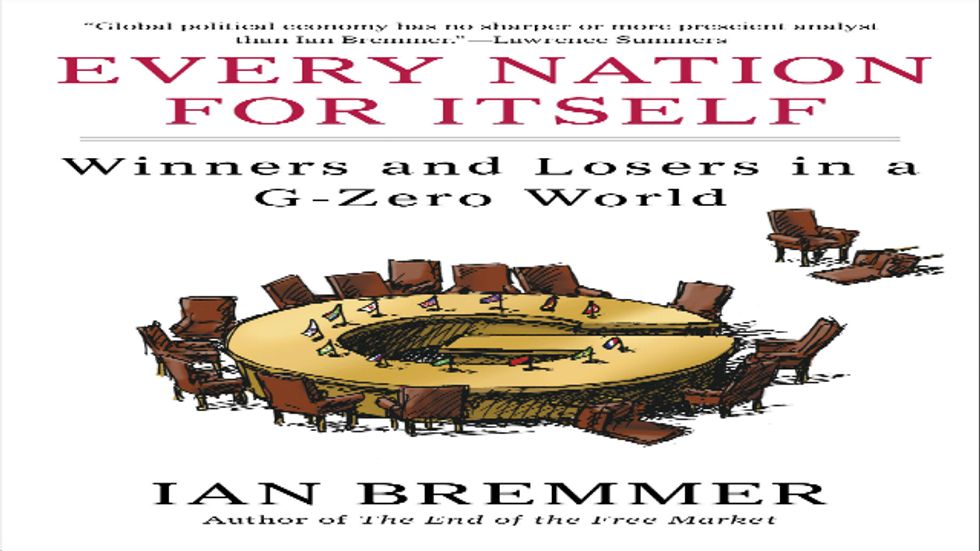 Ian Bremmer, president of Eurasia Group, has just released his eighth book, Every Nation for Itself: Winners and Losers in a G-Zero World (New York: Portfolio: 2012).

When he first floated the idea of a G-Zero world at last year’s World Economic Forum, it stirred enough discussion for the New York Times’s DealBook blog to call it 2011’s “buzziest buzzword.”  Bremmer and frequent colleague Nouriel Roubini (or “Brembini,” as they’re sometimes called) formally introduced the term in the March/April 2011 issue of Foreign Affairs: “We are now living in a G-Zero world, one in which no single country or bloc of countries has the political and economic leverage—or the will—to drive a truly international agenda.”

The is-America-in-decline? debate continues to rage, with some arguing that America will continue to lead the world indefinitely, and others speculating that it’s only a matter of time before some other country or coalition replaces it (China being the prime contender).  Every Nation for Itself argues that this debate’s missing the point: namely, that no one—not America, not China, not anyone else—can meet the challenges of global leadership right now.

I wanted to unpack that conclusion a bit, so I sent Ian ten questions that came to mind as I read his book.  Below is the first part of our conversation.  I’ll post part two on Monday.

POWER GAMES: Does a stable international system require a “single country or durable alliance of countries” (p. 1) to lead?  What alternative arrangements can you imagine?

IAN BREMMER: It does for the foreseeable future, because strong states and blocs of strong states are the only source of power and legitimacy capable of driving an international agenda in today’s world.  International institutions like the Security Council, the General Assembly, the G20, the BRICs, the IMF, etc., continue to be little more than an extension of the (increasingly conflicting) values and interests of member states.

It’s possible to imagine a kind of “G-Subzero” environment in which governments and collections of governments prove obviously unable to respond to various forms of crisis.  In this instance, the state itself begins to lose its primacy as an actor on the international stage.  We can see glimpses of what this scenario might look like in the improvised economic and security arrangements that have appeared inside some of the world’s largest (and, in many places, most dynamic) slums, places where national and even local governments aren’t particularly relevant.  Fortunately, we’re quite far from this sort of world outside those enclaves.

PG: You identify three major factors that brought about the G-Zero, beginning in the 1970s:

What international system(s) might we have today without those factors?

IB: Given America’s long-term debt issues, the United States would still be preparing to do a little less, and governance might be a little less effective.  Perhaps the changes in the international order would have been more subtle than what is now underway.  That said, different factors would have elevated different sets of countries at different times, and we’d still be talking about an underlying shift in the broader balance of international power.  The two world wars boosted American power and devastated potential rivals to an extent that could not have lasted more than a few decades.

PG: Although you predict that the G-Zero will endure “over the next decade and perhaps longer” (p. 5), you conclude that it’s ultimately unsustainable.  Looking forward, you imagine four possible post-G-Zero international systems, going from most likely to least:

Assuming that the first of these international systems indeed comes about, will it be fleeting, as you argue that the G-Zero will be?  If so, what’ll follow it?

IB: If the “world of regions” scenario is the one that emerges, it’s likely to persist for longer than the others would.  That’s in part because this is the status quo that would require the largest amount of focused energy to shift.  It’s easier for U.S.-Chinese relations to change or for international cooperation to break down than for a single country or alliance of countries to develop the underlying power, domestic political capital, and will needed to set and drive an international agenda.

But everything today is “transient.”  Technology and its ability to empower actors large and small evolve so quickly that we have to get used to living in a world that exists in a more or less constant state of flux.  It’s foolish to talk of an “Asian century” or an “emerging market century” because events move at a pace that renders this degree of durability obsolete.

PG: You suspect that “it will probably take another calamity, or at least the credible threat that one is imminent, to give birth to a new [post-G-Zero] international order” (p. 151).

Which calamity’s most likely to do so?

IB: In the nearer term, the likeliest source of this degree of risk is a conflict between China and the U.S.  These are now the two largest economies in the world, and the combination of their economic interdependence, the sharp differences in their political and economic values, and the growing divergence in their interests makes this relationship potentially dangerous for everyone who might be affected by it—which means pretty much everyone.

There is always the risk that a conflagration in the Middle East becomes larger and more dangerous.  In this scenario, we discover that the Arab Spring was merely the prelude to a deeper and much farther-reaching upheaval in the region that has greater impact on countries like Iran and Saudi Arabia.  Over the medium term, we should watch for a financial or economic crisis that becomes systemic to an extent that the 2008 meltdown did not.  Over the longer term, there is climate change.

But volatility creates unpredictability, and we have to invest our forecasts with a healthy dose of humility.

PG: You argue that “in a world where so many challenges transcend borders…the need for international cooperation has never been greater” (pp. 3-4).  You doubt, however, that there’s “a crisis larger enough to force lasting cooperation from most of the world’s established and emerging powers” (p. 170).

What then, if anything, could produce such cooperation?

IB: I don’t see a coherent global order anywhere on the horizon.  That’s the G-Zero problem. There is too large a divergence at the moment in the interests and values of the world’s most powerful states.  When the G-7 gathered to hash out differences, there was no need to debate definitions of democracy or the proper role of government in economic development.  Yes, there were differences, but those differences were quite narrow when compared to those we see at any gathering of the G-20.  In addition, there was a barrier that effectively separated the economies of the capitalist and communist worlds.  No such barrier exists today, which leaves everyone much more vulnerable to events everywhere else.