Many people have talked about the four-day workweek recently. Test runs of the idea have been carried out in Sweden, and Australian politicians have openly discussed the notion. The current system of a five-day work week and two days off is well entrenched though. Beyond work, we also shape our social lives and educational system around this model.

However, many school districts have been experimenting with different ideas. The year-round model, where summer vacation is ended in favor of a few shorter breaks peppered through the year, is well known. Less well known, but quite widespread, is the four-day week model used in school districts across 25 states.

Most schools are required to have students attend for a preset number of hours, not days. In the state of Colorado, where the four-day school week is most popular, students in all school districts go to school for 1080 hours a year. However, many districts choose to arrange this in four, longer days each week rather than in five typical days. The net result is the same amount of school time packed into 144 days each year rather than 180.

While Colorado schools that operate for less than 160 days a year require approval for these schedules, more than one hundred school districts have been approved to do so in all parts of the state.

Why do they do this? How did they come up with the idea?

Schools in Colorado have been experimenting with the shorter week since 1980. The primary motivation for the changes are financial, shorter weeks offer many savings, but many districts also point to a desire for more time for family activities and teacher preparation as reasons for the switch.

While some sources suggest that a few South Dakota schools tried a shorter week in the 1930’s, the recent movement for a shorter school week goes back to the gas crisis. The high cost of fuel in the late 70’s and early 1980’s inspired cost-saving experiments all across the country. While most school districts went back to the five-day week as costs went down, some districts never did.

How does it affect education?

The state of Colorado reports no differences in test scores for students in the four-day week schools and those attending classes on a more traditional schedule. A study carried out by MIT backs these findings. This makes some sense, given that the students are in class for the same amount of time.

However, a study on South Dakota schools showed mixed results when test scores between four day week and five-day week districts were compared, with the traditional schools tending to do slightly better.

This is not the case everywhere, as one school district in Iowa made the switch in the hopes of raising test scores.

What do the students think?

The kids that have been asked about the four-day week seem to be on board with it, even if they just want the three-day weekend. 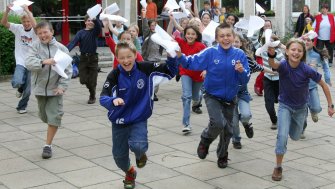 German students sprint out of school after exams. It seems like kids will be kids everywhere. (MICHAEL URBAN/AFP/Getty Images)

What are the positives of doing this?

School districts do save money when switching to this schedule. Transportation and food costs are both cut by around twenty percent, according to the Colorado Department of Education, and additional savings are found by not fully opening school one day a week, cutting down on utilities and staff costs.

Many districts reported job fairs being filled with interested teachers who were more than willing to work four-day weeks. Many teachers cite the extra time to catch up as an additional benefit. Since the time spent teaching remains the same, teachers’ incomes are not affected by the changes. Given issues with how little teachers make, this is big.

What are the negatives?

Parents who work five days a week now find themselves having to plan childcare for one full weekday. Some school districts offer child care for a flat fee, but this means many parents are coming out worse for the arrangement.

No research has focused on how the long school days affect younger students who might get tired at the end of a long day, how students with difficulty focusing fare with the disruption to continuity caused by a three day break each week, or on how the achievement gap in education might be affected by the changes. If these issues are made worse by the shorter week, we don’t currently know about it.

Lastly, emotions seem to run strangely high around this issue. The manual on the four-day week mentions how “one board member indicated his brother would not speak to him because he voted to return to the five-day week.”

Many adults are interested in the four-day week. Will school districts be close behind the office or will they show us the way forward? While it might not be the cost-saving solution for every locale, a shorter school week does offer a solution to funding difficulties without compromising educational goals.

Geneticists figure out how elephants keep from getting cancer.