These things tend to result from an unpredictable stew of underlying conditions, natural and man-made factors, weather, and just plain bad luck. Even just the weather part of it is complicated — with moving air, temperature, and moisture coming together just so to create a beautiful sunny day, or as in California in December 2017, to set the stage for wildfires from Hell. To look for a single cause for a complex disaster such as these fires is naive, but as to the conditions that came together to devastate parts of Ventura and Los Angeles counties in California, meteorological experts leave us with a chilling thought: Events like the Thomas Fire that burned some 273,400 acres — making it the biggest wildfire in Golden State history — are something we can expect to see more and more of thanks to extreme weather conditions associated with climate change.

December, after all, is supposed to be one of the quieter wildfire months in SoCal, with only eight major wildfires from 2000 to 2015, according to Accuweather — this single December, though, there were at least six. And the most lethal wildfires in California history were those that occurred in the Northern California just this last October, killing 31.

California has been hot and dry at least since 2012, the beginning of the state’s multiyear drought that was interrupted only briefly by rains last winter. After those rains, new vegetation briefly grew, and then arid conditions resumed, turning that brushy and flammable growth into combustible fuel that blows around easily in strong winds. In addition, existing vegetation never fully recovered from the drought, remaining dried-out and ready to burn. 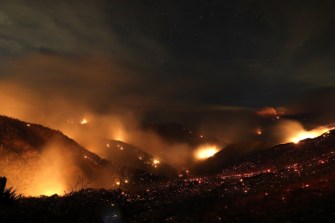 This time of year should be the rainy season in California, but a weak La Niña in the Pacific is keeping storms from making landfall, and scientists are studying why the jet stream is unusually twisted — it’s seen as a factor in the state’s extended drought — with numerous, mostly climate-change based theories under consideration. That includes, for example, one that suggests melting Arctic ice is causing the jet stream to swing unexpectedly northward.

Since last year’s rains, the state continues to struggle against the heat, leaving areas in “uncharted territory,” according to Alex Tardy of the National Weather Service. Temperatures are averaging 15 degrees higher than normal for these months, with Los Angeles getting just 0.11 inches of rain since October 1. What is normal, now anyway? Long-term studies have concluded that human activities have doubled the number of U.S wildfires since 1984 beyond what would be expected as the result of natural weather cycles. 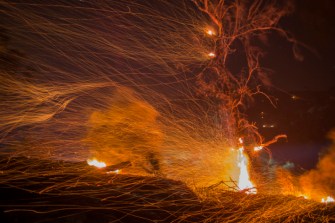 And then there’s the winds, the Santa Ana winds that whipped through the fires at over 80 mph, feeding them with oxygen and helping them race outward. The winds are normal at this time of year, though their strength is unusual, and authorities’ dire predictions — “There will be no ability to fight fire in these kinds of winds,” according to Cal Fire — were pretty much borne out as December progressed. Direct links between climate change and variations in the timing of the Santa Anas and their strength have not been established, though, so they should probably be seen here as simply one reason California’s dryness can be so dangerous.

Like we said, it’s complicated. While the Santa Anas seem to be a natural phenomenon, climate change, though, is pretty clearly implicated in providing the fuel for the fires that made those winds so very destructive this December. Worse, they leave us with little reason to think things are likely to get better unless we do something about it.

Related
Hard Science
Some earthquakes last for seconds, others for minutes — and a few for decades
What do you call it when the Earth shakes for three decades?
Sponsored
What childhood “money story” is shaping your financial behaviors?
Here are the signs that you inherited “money anxiety” from your parents.
The Present
The “maritime Indiana Jones” who salvages shipwrecks now wants to tow icebergs
Simple physics makes hauling vast ice chunks thousands of miles fiendishly difficult — but not impossible.
Neuropsych
Inside the brains of aging dogs
In a citizen science project, thousands of pet dogs are helping scientists to understand what happens to memory and cognition in old age.
Neuropsych
The most common source of awe might surprise you
It’s us.
Up Next
Neuropsych
How We Learn to Read Another’s Mind by Looking into Their Eyes
There now is compelling evidence to support the notion that much information about another person’s mind can be gleaned from his or her eyes.