If you’ve been reading the news in the last few months or seen a few articles lately, you might have noticed that socialism is currently enjoying a surge in popularity in the United States. According to Gallup polling, a majority of young people now have a favorable view of socialism.

A majority of Democrats like socialism, while just under half like capitalism. Several high-profile socialist candidates, such as Alexandria Ocasio-Cortez, have attracted national attention and socialist organizations continue to grow in popularity.

One problem that this causes is a misuse of the word ‘socialism’. Like many other terms, it has been overused, purposefully misused, and accidentally over-applied to the point where it is nearly meaningless. Toss in a few red scares and decades of red-baiting in this country and you get an idea of socialism that is distorted.

So to help out, here are a few definitions you might find useful during your next political debate. 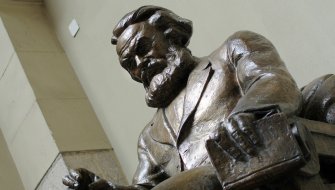 Karl Marx, the founder of a school of socialist thought, as depicted in Hungary. All Marxists are socialists, but not all socialists are Marxists. (ATTILA KISBENEDEK/AFP/Getty Images)

This is as opposed to capitalism, where the means of production are privately owned.

What “socially owned” means is another question entirely. The most popular answer in the 20th century was “owned by the government”; this is called state socialism. There are a variety of other approaches, some of which don’t include the state at all. These often involve cooperatives, worker-owned businesses, or communes. 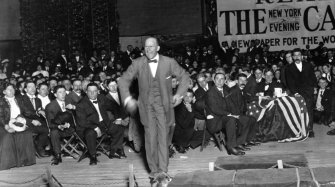 Democratic socialist Eugene Debs campaigns for president. He ran five times and won 6% of the vote in 1912. Bernie Sanders keeps a plaque honoring him in his Senate office. (Photo by Keystone/Getty Images)

Democratic socialism is the model that is currently getting the most attention. It calls for the means of production to be socially owned, and that this ownership incorporates large amounts of democratic management. This typically includes things like worker’s cooperatives or publicly owned enterprises that both workers and consumers help manage.

Many groups that follow this ideology, like the Labour Party in the U.K., have supported state socialism run by an elected government as well.

As the name suggests, this model demands political democracy and opposes authoritarian socialist movements. It also explicitly rejects the Soviet system of governance and economics.

People who currently subscribe to this ideology include Alexandria Ocasio-Cortez in America and Jeremy Corbyn in the U.K. The Democratic Socialists of America are currently the most famous democratic socialist organization in the United States. 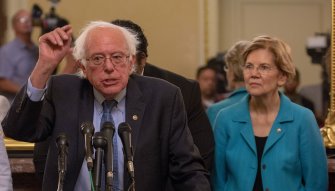 Social democracy is a system that leaves the means of production in private hands but assures that regulations, some public control of the economy, and extensive entitlements exist to keep everybody at a decent standard of living. This is often identified with the Nordic model, but most western democracies have had social democratic governments at some point in the last century.

This system is technically a capitalist one since the means of production are still privately owned. In the United States, however, we often refer to this as “socialism” anyway. This is why Scandinavian economists and officials keep correcting us when we call their counties socialist.

Since he has no interest in “seizing the means of production” this is what Bernie Sanders actually is. Most progressives in the United States, such as Elizabeth Warren, are social democrats in practice. In the same way, progressive organizations are essentially social democratic ones. 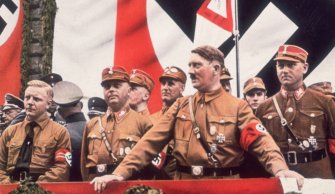 This is the Nazi ideology. The ‘national’ part designates it as separate from international socialism, which hoped to unite the global working class. Democratic socialist movements are typically international in this way, making Nazism opposed to them.

As soon as the Nazis were in power, they decided they liked big business, dissolved trade unions, reduced social welfare, tied farmers to the land, and privatized parts of the economy. Regulations were stepped up to assure that companies followed government programs, but on the whole, the anti-capitalist elements of the party platform were forgotten.

The Nazis were also anti-communist because of their opposition to equality, class conflict, and social ownership of the means of production. They crushed the left at the first chance they got.

This combination of ideas may seem strange, but fascism is a peculiar ideology that allows for odd combinations of ideas. Nazism is typically viewed not as a socialist ideology but as a fascist one, and people claiming that the democratic socialists endorse the same policies as Nazis are mistaken.

People who support this ideology are Nazis, and no major American political figure currently is one. 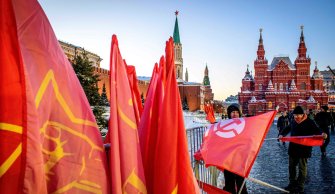 Communism is two things. The word is most commonly used to refer to the political ideology associated with the USSR. That ideology, officially called Marxism-Leninism, favors a dictatorship of the proletariat, state control of the economy, and a society organized toward removing the remnants of capitalism.

There are, however, a hundred strains of communism and a thousand significant figures who would protest this definition of communism. These people argue that what the USSR did wasn’t really communism, that everything was great until Stalin showed up, or even that Russia didn’t go far enough.

Communism is also the name for a hypothetical society that comes after the final socialist revolution when classes, the state, and money have faded away. Communist parties and governments are, at least in theory, working to create this society.

No major American political figures are communists, but there are a slew of small communist organizations.

If everyone in the world ate like Americans, we’d run out of land to grow food