As the immigration debate doesn’t let up, the White House has been promoting the idea that what it calls chain migration is a way by which immigrants essentially game the system. According to the White House, chain migration results in an unending stream of foreigners using their extended family ties to move to the U.S. “Every year, the U.S. resettles an immigration population larger than the size of Washington, D.C.,” reads the chart posted by our nation’s highest office. Is the White House onto something here?

For starters, what is so-called chain migration—a pejorative term, according to Democrats? What the White House is attacking goes back to a 1965 civil rights-oriented law, explains Politico. That law made family reunification instead of racially based quotas the basis for immigration to the United States. Under the law, if you are an American citizen, you can apply to bring your spouse to the U.S. if they are a citizen of another country. And then, once they become a citizen, they can apply to bring their mother over. And then, if the mom had other children, for example, she can apply to bring those over. And they will bring their spouses. And their spouses will bring their children and parents and so on. That’s what could happen, creating a kind of chain, argues the White House position.

Interestingly, the initial policy of favoring family connections was instituted to favor European immigrants and to make sure the make-up of America stays more white, explains Caitlin Dickerson, who covers immigration for The New York Times. But as immigration patterns changed, the policy stopped achieving the intended effect. 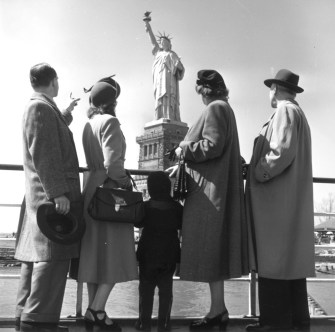 Hungarian immigrants arriving in America, looking from the deck of their ship towards the Statue of Liberty. (Photo by Three Lions/Getty Images)

The White House’s main issue with what it labels chain migration is that it allegedly awards green cards to people based on “an antiquated system of family ties, not skill or merit.” This results, says the WH, in decreasing skills in the labor force, lowering wages and increasing the deficit. This also undermines national security and puts more people on federal welfare, warns the office.

But that’s not what really happens. While families do use the law to reunite, every step in this chain takes years and often decades to complete. In 1988, a federal agency (then known as the General Accounting Office) concluded that the waiting lists and the backlog in the system made the prospect of unlimited chain migration virtually impossible and a “myth”, reports Politico. Fast-forward to now and the waiting periods have only increased in length. There is such a backlog that the U.S. is currently processing Chinese sibling visa requests from 2004, while people from Mexico and the Philippines wait up to 25 years to reunite with their families as Americans.

One big factor that also works against creating chains is the existing caps on many immigrant categories, especially ones that could potentially cause large pools of people to move. Only 23,400 married children of U.S. citizens (plus their own spouses and minor children) can immigrate each year, and 67,500 adult siblings of U.S. citizens (plus spouses and minor children), reports Vox. There are also caps on countries. Studies find that as of 2015, immigrants that arrived in the US between 1981 and 2000 had sponsored an average 1.77 relatives to join them. That’s not creating much of a chain. 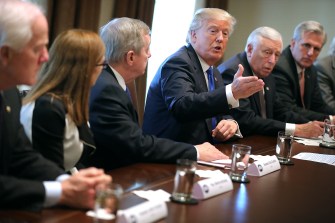 U.S. President Donald Trump (C) presides over a meeting about immigration with Republican and Democrat members of Congress at the White House January 9,

So why is the White House using potentially inflammatory language, replete with scary charts? The vocabulary comes from anti-immigration groups like the Federation for American Immigration Reform and Numbers USA, which would like to reduce all immigration to the U.S., but especially family-sponsored immigration which comes largely from Latin America and Asia. These groups also have ties to racist and White Supremacy groups.

What President Trump would like to see instead is a “merit-based system” similar to nations like Canada and Australia. That kind of system has immigrants being selected based on merit and skills. Trump insists that such an approach would reduce the costly immigration process and improve job opportunities for Americans already in the country, especially the “poorest workers”.

Canada and Australia’s immigration systems, however, are not exactly what Trump seems to think. For one, they admit far more immigrants than we do as a percentage of how many people already live there. The amount of permanent residents that the U.S. allows in every year equals about 0.3 percent of its population. In contrast, Canada allows in about 0.7 percent and Australia 1.1 percent. This makes these two countries 2.4 and 3.5 times more open to immigrants than the United States, reports Cato Institute. 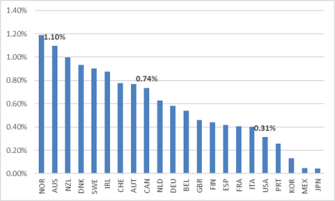 Immigrant Inflow as a Percent of Population, 2013. Credit: Cato Institute.

Canada admits significantly more high-skilled workers than the U.S.—six times more per capita, to be precise. Of the1,183,505 people who were granted permanent residency in the U.S. in 2016, skilled workers accounted for only 137,893, says the Yearbook of Immigration Statistics.

Canada prioritizes merit in immigrants by employing a 100-point scale in reviewing applicants. The most points are given for language skills and education, reports USA Today.

Another part of the merit-based approach by Canada is to give individual provinces more control to allow in people that could help their economies.

Canada’s immigration policy is based on its economic needs. It allows in high-skilled people who can advance its innovation but also workers to help in the agriculture sector as well as nurses, writes Jeremy Robbins, the executive director of New American Economy. A similar needs-based approach could make sense for the U.S. But Canada also admits more family-based immigrants per capita than the U.S., contrary to the logic of the anti-chain migration advocates.

By targeting the ability of Americans to reunite with the closest members of their family, the White House threatens the bedrock principles of this nation of immigrants, writes Politico‘s Cecilia Munoz. Family immigration is important to economic growth because as new immigrants acquire key skills at our universities and train in America’s entrepreneurship know-how, they are likely to leave if their families are not allowed to join them in their new country. 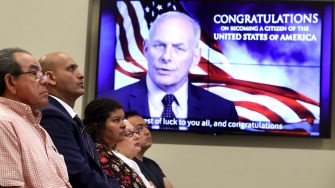 Could family ties be a merit, and can that become incorporated into the merit-based system? Caitlin Dickerson of The New York Times argues that there are indicators showing how having family ties is actually helpful and can drive the economy simply because these immigrants have a built-in support system in their family. Having family close by can make it much easier for these new arrivals to integrate into the economy even if they don’t have PhDs.

On the other hand, when you look at the balance, upping the number of skilled workers in the United States is also a reasonable argument to make. About 63% of permanent residents in Canada are admitted for economic skills and about 24% for family members, while in the United States, the reversal is true. About 63% of the green cards go to people with family connections and only 13% for economic reasons.

Family ties are the core of the American immigration system. We are the most generous in that respect in the world. But taking a look at who we are and what kind of country we are going to be is an essential part of the upkeep of our values. An immigration system that safeguards families but also vastly increases how many skilled immigrants we bring into the U.S. would be the holy grail of immigration reform.

Related
Neuropsych
Asthma drug brings back “lost” memories
In a study involving mice, scientists used two different techniques — one optogenetic and one pharmacologic — to recover “lost” memories.
Stoicism: How to turn your sadness into strength
Chloé Valdary shares the ancient Stoic principle that can defeat modern despair.
▸
7 min
—
with
Chloé Valdary
Hard Science
3 new studies indicate a conflict at the heart of cosmology
The Universe isn’t as “clumpy” as we think it should be.
Starts With A Bang
The sober truth about finding the Universe’s first stars
The Universe certainly formed stars, at one point, for the very first time. But we haven’t found them yet. Here’s what everyone should know.
Life
Our antidepressant drugs are affecting animals and ecosystems
A toxicologist explains the impacts of antidepressants on fish — and no, they’re not getting any happier.
Up Next
Politics & Current Affairs
Stephen Fry announces he’s fighting prostate cancer
Stephen Fry announces that he’s had surgery for prostate cancer nine the most Stephen-Fry way possible.