America’s “founding fathers” led an armed population against the British monarchy and won. It is understandable that they saw the way the country was founded as an example of how it should be organized. They were fighters who wanted the ability to keep fighting to preserve their independence. And thus we got bearing arms as a cornerstone American right.

Since the gun control / gun rights debate often tries to discern the intentions of the Founding Fathers to suit polemic purposes (producing countless memes with misquotations), let’s look at some of the actual quotes by the makers of America:

Thomas Jefferson wrote this into the 1776 draft of the Virginia Constitution, the first such document of a state declaring their independence:

“No free man shall ever be debarred the use of arms.”

That seems pretty cut and dry until you consider that the second and third drafts of the same document added “within his own lands or tenements”to the sentence. It seems Jefferson seriously considered that there should be some limitations on the individual’s right to gun ownership. It makes sense to own a gun for self-defense on your own property, but a different set of issues comes up when this gun is taken into public space. 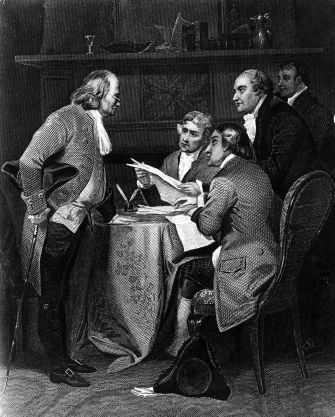 Another oft-used quote by Jefferson used by gun rights advocates is: “I prefer dangerous freedom over peaceful slavery.” Here Jefferson states the basic principle behind rising up against the monarchy – while it’s harder to control and keep stable, a democratic society is preferable to being enslaved, though peacefully. And, as we all know, guns are an excellent instrument for disrupting peace.

The statement can be debated further – is it more moral to live in a society where individual safety is not guaranteed and people often die due to gun violence versus living in a society where you have fewer freedoms, but greater safety for all individuals? Is “freedom” more precious than safety? 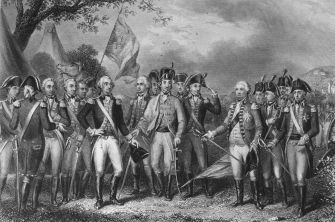 While guns are certainly useful in overthrowing monarchs, is individual gun ownership the best way to oppose monarchs or hypothetical tyrants? For argument’s sake, if the main reason to have a gun is to stop a potential dictator, what if people are organized into militias (as the founding fathers advocated) or some such political organization? And these people could have a collective well-guarded stockpile of guns and munitions instead of guns being out there in the world for any random person to use (for purposes having nothing to do with stopping the next Hitler).

The few people who are passionate enough about standing up to the government occasionally do organize themselves in such fashion (like Cliven Bundy’s family). But outside of this anti-tyrannical reasoning, it can be argued that the prevalence and the media attention on gun violence is causing the fear and instability in society that is the perfect breeding ground for a tyrant to exploit. 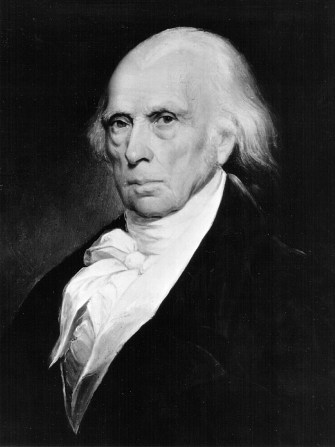 A painting of James Madison, fourth President of the United States serving from 1817 to 1825. (Photo by National Archive/Newsmakers)

“Besides the advantage of being armed, which the Americans possess over the people of almost every other nation, the existence of subordinate governments, to which the people are attached, and by which the militia officers are appointed, forms a barrier against the enterprises of ambition, more insurmountable than any which a simple government of any form can admit of. Notwithstanding the military establishments in the several kingdoms of Europe, which are carried as far as the public resources will bear, the governments are afraid to trust the people with arms.”

He essentially believes that responsible citizens skilled in the use of guns who are able to organize into militias provide a barrier against dictatorship. 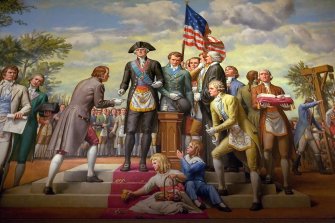 A mural depicts the first US President and a member of the Freemasons, George Washington, as he lays the cornerstone of the US Capitol on September 18, 1793, in Memorial Hall at the George Washington Masonic National Memorial in Alexandria, Virginia 20 November 2007. Washington is wearing full Masonic regalia. AFP PHOTO/SAUL LOEB (Photo credit should read SAUL LOEB/AFP/Getty Images)

George Washington also saw some limitations on the role of militias. As Edward Lengel, editor in chief, of the Papers of George Washington project at University of Virginia, said in this interview to Politico:

“Indeed, during the (Revolutionary) war he very frequently lamented the crimes carried out by armed civilians or undisciplined militia against their unarmed neighbors. The solution to these crimes, as he understood it, was to increase the power of the government and the army to prevent and punish them — not to put more guns in the hands of civilians.”

In fact, Washington sent state militias to counter the Whiskey Rebellion of 1794, when Western Pennsylvania citizens led an armed conflict to fight a new whiskey tax. Washington saw the rebellion as being a concern to the central government and praised “citizen soldiers”for dealing with it. 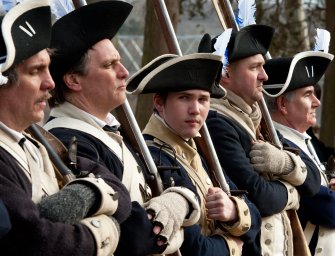 An unidentified re-enactor playing a soldier looks over during the annual re-enactment of George Washington crossing the Delaware River on Christmas day in 1776. (Photo by PAUL J. RICHARDS/AFP/Getty Images)

“A free people ought not only to be armed, but disciplined; to which end a uniform and well-digested plan is requisite; and their safety and interest require that they should promote such manufactories as tend to render them independent of others for essential, particularly military, supplies.”

Usually, only the first part of this quotation is used  – “A free people ought not only to be armed, but disciplined”. It’s clear that Washington is again talking about citizen soldiers and the need for them to be disciplined and organized, with a plan and concern for safety. It’s doubtful he meant a climate where guns are freely available in 24-hour megastores.

Of course, it often comes down to interpretation. What did the “Founding Fathers” really mean? 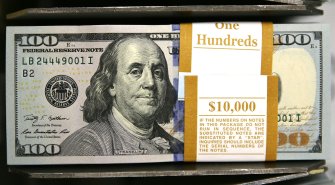 In an example, Ben Franklin said this:

“Those who would give up essential liberty to purchase a little temporary safety deserve neither liberty nor safety.”

While it appears to mean something else, this often-invoked quote actually defends the power of a state legislature to impose tax in the interest of collective security. It’s not really about the gun issue at all, but very often appears on self-serving lists of quotes that are used by various activists. This illustrates the danger of reading too much into the words of admittedly great, but long-since-dead people to address the modern issues we, the living, face.

It is safe to say the Founding Fathers definitely saw a role for guns in fighting against or avoiding tyranny (based on their own example and the weaponry available in their day). They also were not the unequivocal, loud gun rights advocates that some would like them to have been.

They were, as we’d like them to have been, wise.

Tags
founding fathersgun controlgun rights
In this article
founding fathersgun controlgun rights
Related
Health
Almost 300,000 guns sold without background checks as pandemic overwhelmed system
The ‘Charleston Loophole’ has likely allowed thousands of guns to end up in the hands of people who would have failed a federal background check.
The Present
These are the 7 most partisan issues in America right now
From gun control to immigration, Americans remain split on a handful of contentious issues.
The Present
Amendments to the U.S. Constitution
Do you know your rights? Hit refresh on your constitutional knowledge!
▸
2 min
—
with
Big Think
The Present
A short history of knowledge, from feudalism to the Internet
Crowdsourcing as an idea isn’t anything new, says historian and sex researcher Alice Dreger. She tells us about the history of public gathering of information from the medieval era to today.
▸
4 min
—
with
Alice Dreger
The Present
To Certain White American Males, a Gun is an Important Symbol
Unraveling the psychology behind gun ownership may offer fresh insight into the gun control debate.
Up Next
Starts With A Bang
Ask Ethan: Why do sunbeams look like… sunbeams?
They’re not just for dogs and cats to lay in; there’s a real, physical story behind them!“The sacred rights of mankind are not to be rummaged for among old parchments or […]