Unless you live there, the city of Eagle, Alaska, is far, far away. Here it is on a map: 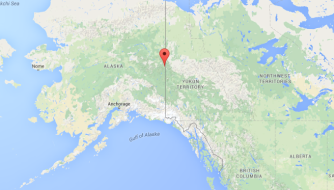 That’s about as middle-of-nowhere as you can get, Antarctica notwithstanding.

As you can probably imagine, Eagle is typically known for three things. The first: its history as a Gold Rush boomtown. The second: that only about 90 people live there. The third: that you have no reason to expect the outside temperature to be 91°F (33°C) on May 23. Those three things (among other ancillary details) form the foundation of everything that is Eagle.

Got that? Good, because:

The Coop station in Eagle, Alaska, reached 91°F yesterday. That is hotter than any day in #Houston or #Dallas, TX, this year. #akwx#txwx

Is the time crystal really an otherworldly revolution, leveraging quantum computing that will change physics forever?
13-8

Reductionism is a successful way to explain the universe, but it cannot replace experience. This is part of the mystery of life.
Strange Maps

Love him or hate, Karl Marx redefined geopolitics and shook up the world order.
Up Next
Culture & Religion

David Walsh has found that sports help people cope with big life changes — it acts as an outlet and allows us to have a sense of community. So, how would sports help in the transition to retirement?