Of the new-world civilizations that were destroyed by the Spanish during the age of discovery, the Incan Empire is one of the most interesting. Despite not having a written language, wheels, draft animals, or ironworking, the Inca managed to build the largest pre-Columbian empire in the Americas and one the largest empires in the world in the 15th century. They had a refined culture and one which can perpetually amaze those who wish to study it.

The Inca had a Bronze Age command economy

According to Gordon Francis McEwan, in his book The Incas: New Perspectives, the Inca had a most unusual economy—one that would make modern communists raise an eyebrow in curiosity. McEwan explains:

“With only a few exceptions found in coastal polities incorporated into the empire, there was no trading class in Inca society, and the development of individual wealth acquired through commerce was not possible… A few products deemed essential by the Incas could not be produced locally and had to be imported. In these cases several strategies were employed, such as establishing colonies in specific production zones for particular commodities and permitting long-distance trade. The production, distribution, and use of commodities were centrally controlled by the Inca government. Each citizen of the empire was issued the necessities of life out of the state storehouses, including food, tools, raw materials, and clothing, and needed to purchase nothing. With no shops or markets, there was no need for a standard currency or money, and there was nowhere to spend money or purchase or trade for necessities.”

Internally, there was little to no market economy. In the event of shortages of non-vital goods, an area would not correct it by means of buying them from an area with a greater supply. Rather, “regional differences in production were, by preference, handled by means of colonization instead of through barter or trade”. What was needed by a province was produced by that province, though it might take some expansion to be able to do it. In cases of shortages of essential goods, there was state-mandated resource exchange between provinces.

What did this mean for the people living there?

The most notable difference between the Incan taxpayer and the European serf was that Incan taxes were paid in labor to the state and in exchange for this labor the population was given their necessities out of state warehouses. With this large, easily mobilized labor force the Inca were able to build great works of architecture, farm the Andes, build a road network that spanned the empire, and conquer their neighbors. 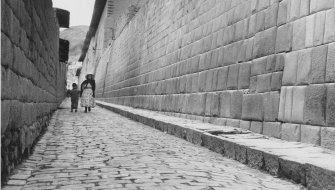 An eye-level view of Machu Picchu. Notice that the walls have stones which are evenly set. This was accomplished without mortar. That they are still so tightly packed is a testament to the skill of their craftsmen. (Getty Images)

While this system, known as “mit’a”, was essentially a system of forced labor, the Inca state presented it as one of reciprocity. To this end, it attempted to balance the amount of labor each taxpayer would be required to pay and offered those who worked the hardest bonuses in the form of extra goods as payment. Those who provided for the state were themselves provided for by the state.

This system did not apply to the nobility, who managed things without having to offer manual labor. They were, however, held accountable for the taxes received. The ruling elite also theoretically owned the means of production and all the natural resources. 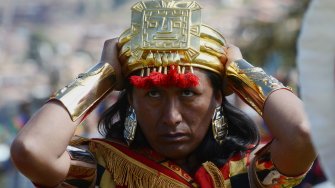 An actor prepares to play the Emperor of the Incan Empire at a festival. (Getty Images)

How could they manage this without a written language?

Despite not having a written language, the Inca did have an accounting system. Quipu, or “talking knots” was a system of representing numbers in a decimal system with knotted strings. Such strings could convey a great deal of information and allowed for the centralization needed to manage such an extensive empire. The road network they built, all 40,000 kilometers of it, also allowed for the transfer of needed goods across their extensive empire in short order. 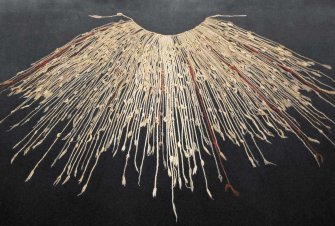 Quipu or ‘talking knots’ were “critical instruments of factotums and bureaucrats, an imperial language of record-keeping that helped tally censuses and tribute payments from far-flung communities to the capital city of Cuzco,” writes the NEH. (Photo: Wikimedia Commons)

Why would they organize things this way?

Several ideas have been put forward. One is that the key resource for making such a large empire work was quick access to a large labor force and this system allowed for that. Another is that power could be more easily consolidated by having the state control access to resources. It is probable that pre-Inca societies in the Andes had similar systems, so the initial motivation may be impossible to know.

It must also be noted that the archeological evidence is limited and most accounts of how the Incan economy worked are largely based on Spanish observations and the few records kept by the descendants of the Inca. While we can say that the Incan economy was a non-market one, other details become fuzzy and motivations are even more difficult to determine. Of course, despite the lack of a market system, some barter and other methods of internal trade certainly took place.

So did they have a fully functioning, idealized socialist economy or not?

The question of if this represents a socialist paradise or a socialist tyranny remains unanswered. It should also be noted that this system has a great deal in common with feudalism in general and could be viewed as a variant of it.

It must also be remembered that the modern conceptions of socialism and communism are industrial and post-industrial economic concepts and applying them directly to a bronze age civilization is not necessarily possible. A Marxist would probably refer to the Incan economy as “primitive communism,” if that Marxist was inclined to ignore the slew of lords, barons, and the emperors.

The Incan Empire lasted less than 100 years, perhaps evidence that the flame that burns brightest burns half as long. Through ingenuity, hard work, and excellent organization the Inca managed to build an empire with social, cultural, and material achievements that only ended with the arrival of apocalyptic plagues and invaders with advanced technology. Their curious economic system is further testament to their creativity. How it would have evolved if not for the Spanish invasion remains unknowable, but it is fascinating to consider it as it was.

Related
Starts With A Bang
Ask Ethan: What are white holes, and do they really exist?
In General Relativity, white holes are just as mathematically plausible as black holes. Black holes are real; what about white holes?
Life
Strange life forms create an “alien” ecosystem in an abandoned uranium mine
Slimy biofilms made up of bacterial and eukaryotic life forms have taken over an abandoned, flooded uranium mine in Germany.
Hard Science
Earth has an eerie “sodium glow,” and astronomers use it to image stars
Air currents in our atmosphere limit the resolving power of giant telescopes, but computers and artificial stars can sharpen the blur.
Health
How saliva changes the flavor of food
“It’s a liquid, but it’s not just a liquid.”
High Culture
Why are flood myths so common in stories from ancient cultures around the world?
Could the prevalence of flood myths around the world tell us something about early human migration or even the way our brains work?
Up Next
Design Thinking
How to Provide an Engaging Learning Program Around Design Thinking
Design thinking is the art of implementing elements from a “designer’s toolkit” to create innovative solutions and systems. When applied the right way, it can offer considerable benefits.