Nietzsche has had a remarkable effect on political history for being a stateless individual who was never very political. His writings have gone on to inspire several movements of radically different natures despite him being a rather non-political thinker. Even when he did comment on politics, it was mostly to say how little he cared for an ideology. Here are a few political movements that Nietzsche commented on, and what he thought of them. 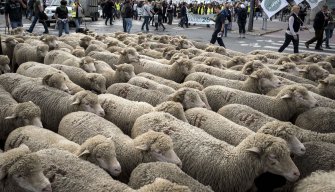 Nietzsche’s conception of the real winners in a democratic system. (Getty Images)

If there is a single thing we know about Nietzsche’s politics, it is that he was no fan of liberal democracy. He saw democracy as a tool of the masses to oppress the few. As Nietzsche despised the “herd”, he was not only opposed to the idea of the majority having all the power but outright afraid of it.

He was one of the several interesting philosophers who opposed democracy, but he was less concerned with the majority making poor choices and more with them using the state to impose their morality on the free-spirited loners who made up a small part of the population.

He was also far from an egalitarian and saw little reason to give everybody the same rights. To put not too fine of a point on it, he defines himself as opposed to democracy outright in Beyond Good and Evil:

“We, who regard the democratic movement, not only as a degenerating form of political organization, but as equivalent to a degenerating, a waning type of man, as involving his mediocrising and depreciation: where have WE to fix our hopes?” 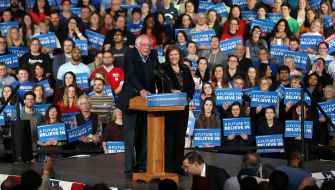 In the same way that he dislikes liberal democracy, Nietzsche disliked socialism. He is perhaps harshest to the socialists in this line from Beyond Good and Evil:

He sees this political movement as being both a secularized Christianity, offering all of the benefits of the herd morality and the chance to bring down those you don’t like, and as a sort of starting point for a dull phase in human existence and a starting point for the Last Man.

As Nietzsche was opposed to egalitarianism, any ideology that has political and economic egalitarianism as key points was abhorrent to him. In the section the above quote is taken from, he explains how the political movements of socialism and liberalism are both slavish in nature. 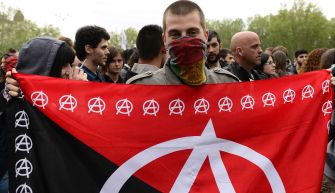 A fellow who probably thinks Nietzsche is on his side. (Getty Images)

His views on anarchists are not uncertain either, he calls them “dogs” in Beyond Good and Evil. In The Antichrist he compares anarchism to his favorite punching bag, Christianity:

“The Christian and the anarchist: both are décadents; both are incapable of any act that is not disintegrating, poisonous, degenerating, blood-sucking; both have an instinct of mortal hatred of everything that stands up, and is great, and has durability, and promises life a future.”

Nietzsche also views anarchism as being a secularized form of Christianity. As with socialism, he says both of them wish to reduce everything to their level, encourage herd behavior, and lash out at their enemies rather than towards their own ideal. Left anarchists who infuse egalitarian rhetoric into their anarchism also incur the same wrath the socialists and liberals face when dealing with him.

Despite these critiques, several prominent anarchists thought highly of Nietzsche and Emma Goldman even declared him to be an anarchist. Several leaders of the anarchist movement in Spain cited Nietzschean ideas on morality during their revolution. Nietzsche’s stances against the state, church, herd morality, and desire for the Ubermensch who is neither master nor slave do lend themselves to anarchist thought rather easily. 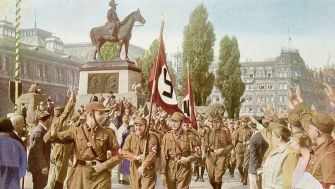 People who definitely thought Nietzsche was on their side.

We’ve talked before about how Nietzsche wasn’t a Nazi. The key points of that article bear repeating now. He was opposed to mass movements in general and German nationalism in particular. He claimed the greatness of the German people came from their “Polish blood”, and he found anti-Semitism to be ridiculous. He even ended his bromance with Wagner over his increasing anti-Semitism.

As in the case of anarchism, these stances didn’t bother the fascists very much. Mussolini loved him, and once received the complete works of Nietzsche as a birthday gift from Hitler. While they didn’t have completely accurate images of Nietzschean thought due to the interference of Nietzche’s sister, his inegalitarian, anti-feminist, and anti-democratic views would have appealed to the Nazis in any case.

Nietzsche’s list of things he opposed also includes using the state to enforce morality on those who would be most restrained by it. He found the Christian church repulsive, found no reason to follow its dictates, and was opposed to the status quo in Europe in general.

His philosophy harkens back to the past as offering moral examples, but that past is often Ancient Greece and its pre-Christian morality. The Moral Majority would have no friend in Nietzsche.

It might be possible to view Nietzsche as a reactionary, but his agreement with reactionaries would be incidental. He would disagree with nearly all other reactionaries on why not everyone is equal, other people shouldn’t vote, or why modern culture wasn’t very good. There is no doubt that his arguments and claims of being an immoralist would profoundly shock them.

So, what is he? Left? Right? Nazi? The Antichrist?

At the end of the day, Nietzsche is not a political thinker. While his provocative stances on morality lend themselves to questions on government, he never really tried to answer them. His concern was chiefly with the individual who may be restrained by the popular morality, state-sanctioned or not.

While he did comment from time to time on ideologies, he endorsed nothing and remained the champion of the lone genius who feared encroachment on their ideas by the unwashed masses. While his stances against democracy and equality may shock us today, his critiques of mass movements remain insightful and even the most dedicated democratic socialist can benefit from considering them. Just remember what happens to he who fights monsters.

Related
13.8
The weirdness of quantum mechanics forces scientists to confront philosophy
Though quantum mechanics is an incredibly successful theory, nobody knows what it means. Scientists now must confront its philosophical implications.
Neuropsych
Why is a Starbucks loyalty rewards program making customers so angry?
The rewards price to get a free cup of hot coffee at Starbucks is going up.
Empowering growth
7 essential management training topics for every team leader
From emotional intelligence to problem solving, these management training topics will set team leaders up for success.
Thinking
What if you could rewire your brain to conquer suffering? Buddhism says you can
For Buddhists, the “Four Noble Truths” offer a path to lasting happiness.
Hard Science
Solved: 500-year-old mystery about bubbles that puzzled Leonardo da Vinci
The solution involves the infamous Navier-Stokes equations, which are so difficult, there is a $1-million prize for solving them.
Up Next
Mind & Brain
Teens have one key agenda when using social media
A new study looks at how teens construct their online identities.