The size of the U.S.-Mexico border wall proposed by the Trump administration seems shockingly ambitious when overlaid onto a map of Europe. The history of physical barriers in Europe, especially the Berlin Wall, adds unexpected context to a political and social row over domestic immigration policy.

Stretching 1,900 miles according to the U.S. Customs and Border Protection Agency, the U.S.-Mexico border is the tenth longest national borders in the world, just behind the political border between India and China. (The longest border in the world is the U.S.-Canadian border at 5,525 miles.) 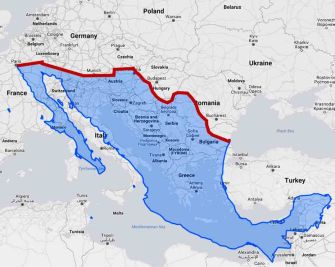 The length of the U.S.-Mexico border is not actually agreed upon. The International Boundary and Water Commission extends the border to measure 1,954 land miles, and 1,984 total miles to include water boundaries along the Rio Grande.

There is reportedly a total of 700 miles of border wall already dividing the United States and Mexico, leaving 1,200 miles of construction remaining, nearly double what currently exists.

Many of history’s most famous walls have not been end-to-end constructions. The Great Wall of China, constructed to buttress the border between Mongolia and China (the world’s fourth largest), was built in key strategic points only. 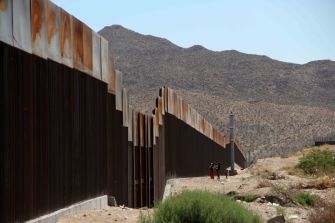 A Mexican family stands next to the border wall between Mexico and the United States, in Ciudad Juarez, Mexico on May 23, 2017. The United States is about to complete the construction of a metal wall nearly seven meters high on the border between Ciudad Juarez and El Paso, Texas, replacing a wire mesh fence dating back to 1986, officials said. / AFP PHOTO / HERIKA MARTINEZ (HERIKA MARTINEZ/AFP/Getty Images)

But modern building materials and the abolition of slavery makes any such comparison specious. (A Chinese maxim goes: Why does the Great Wall reach so high? Because it is built on the bones of slaves who died raising it.)

In that sense, it is better for border walls to be expensive than cheap. And any such U.S.-Mexico border wall will be costly, with current estimates in the $25 billion range.

As NFL linemen keep getting bigger, are they also risking their health? Here’s how the offensive lines of the New England Patriots and Philadelphia Eagles stack up.