No members of the North Korean ruling family have ever set foot in South Korea. So why now?

Married to the son of North Korea’s Workers’ Party secretary, she apparently has quite a bit of influence on Kim Jong-un, and spends a lot of her time helping to protect her brother’s image via the propaganda department.

Her appearance at the games is being looked at as a possible thawing in political relations between the two countries, which might be a positive for the world. However, Kim Yo-jong is banned from entering the United States due to links to human rights abuses in North Korea. 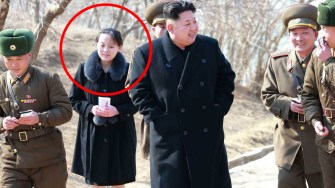 She arrives after the entire North Korean delegation made it to Pyeongchang, including 10 athletes, hundreds of cheerleaders, 21 journalists, 26 taekwondo instructors, and 4 National Olympic Committee officials. The two countries will enter the ceremony together this year, and they are fielding a women’s hockey team medal competition with athletes from both countries.

South Korea welcomed the news in an official statement from its government. “We believe that the North’s announcement of the delegation shows its willingness to ease tensions on the Korean peninsula along with a message of celebration for the PyeongChang Olympic Winter Games. It is significant that the delegation also includes Kim Yo Jong, who is Chairman Kim Jong Un’s sister and holds an important position in the Workers’ Party of Korea.”

Related
The Present
Even in the age of AI, some problems are just too difficult for computers
Computers are growing more powerful and more capable, but everything has limits
The Future
How the metaverse will revolutionize K-12 and higher education
Imagine going on a tour through the human circulatory system as a tiny cell. That is just one example of education in the metaverse.
Starts With A Bang
Ask Ethan: What are white holes, and do they really exist?
In General Relativity, white holes are just as mathematically plausible as black holes. Black holes are real; what about white holes?
Life
Strange life forms create an “alien” ecosystem in an abandoned uranium mine
Slimy biofilms made up of bacterial and eukaryotic life forms have taken over an abandoned, flooded uranium mine in Germany.
Hard Science
Earth has an eerie “sodium glow,” and astronomers use it to image stars
Air currents in our atmosphere limit the resolving power of giant telescopes, but computers and artificial stars can sharpen the blur.
Up Next
Health
Where did Valentine’s Day start? Lupercalia: Rome’s most bizarre spring rite
Where does Valentine’s Day come from? Let us introduce you to the festival of Lupercalia, a festival when naked young men and women ran around whipping one another with animal hides.