I thought long and hard about whether it was appropriate to publish this planned article on fear and risk today. I began writing it sometime before the horrific events of Friday, the November 13, 2015 attack on Paris. Ultimately I decided, as indeed I argue here, that substantially changing our behavior as a result of the actions of terrorists is to let the terrorists win. I am therefore publishing this edited version today, dedicated to the victims.

As we mourn those who died in the tragic events, it is vital that we keep the matter in perspective. Advocating violence, hatred, and excessive restrictions on our freedom is exactly what the terrorists want to achieve.

In the two decades that passed between 1992 and 2012 the number of cyclists making trips in London doubled without any increase in the number of cyclists killed. The proportion of fatalities due to bike accidents covered in the news, however, didn’t double, triple, or even quadruple; it leapt all the way from 6 percent to 75 percent. Furthermore, two decades ago if a bike accident was covered in newspapers, we could expect it to be covered just once. Today that number is four or five different times — different articles. 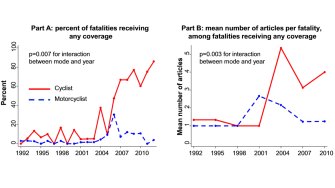 Deaths due to cycling accidents, in this case, may serve as a metaphor for the threat to our free and open society posed by terrorism. If we allowed the massive increase in news coverage of cycling deaths to deter us from cycling, we would sacrifice an activity that is so beneficial to our health that statistically the health benefits outweigh the life-years lost by a factor of 20 to 1. Just like riding a bicycle, freedom has risks and just like riding a bicycle, the benefits of freedom far outweigh those risks.

For an American living today, the risk of death due to an act of terrorism is 35,079 times smaller than the risk of death from heart disease; this level of risk is roughly comparable to the risk of death due to being crushed by your own furniture. These numbers are relatively similar for anyone living in most stable Western democracies. Even an event on the scale of Friday is a relative blip in statistical terms when compared to deaths caused by things like vehicle accidents or cancer.

It is worth pointing out that this is certainly not true the world over, however. Places where terrorism is an everyday occurrence are not free and open societies — they are places torn by dictatorships, extremists, and endless cycles of violence. If we really want to fight terrorism, a good way to do that is to have compassion for those fleeing acts of terrorism in their own countries; hatred only fuels hatred.

Now is time for mourning, but if we allow ourselves to be overcome by feelings of fear and hatred, we allow the cycle of violence to continue, which is exactly what the terrorists hope to achieve.

Is Religion to Blame for Paris and Beirut?