Given all the punches, throws, and general punishment Marvel’s heroes take in their films, privilege isn’t one of the first things you’d think of. But the male actors who play these roles have been vocal in their complaints about how uncomfortable their superhero get-ups are, and in doing so, according to Evangeline Lilly (The Wasp in Ant-Man and The Wasp), they’re revealing how easy they’ve had it compared to non-fictional women out in the everyday world.

Paul Bettany—for years the off-screen voice of Tony Stark’s J.A.R.V.I.S. and now playing Vision in the Avengers series since the Avengers: Age of Ultron—told USA Today, “I do everything I can not to get into that suit. It takes 3 1/2 hours to put it all on. And it takes me about .30 seconds to take it off. I just rip it.”

Bettany adds, “It’s pretty painful, it’s uncomfortable. You’re working in it for 10 hours and not really being able to hear well. There’s only this much of your face open to the air. The first day is not the problem. The second day is not the problem. The third day gets a bit tough. By the fourth and fifth day of the week, you are really having to meditate on the line of actors, thousands of them, who would love to be in your position.”

Lilly asks BackstageOL, “Do I have the most comfortable suit in the MCU or have men not had the life experience of being uncomfortable for the sake of looking good?” 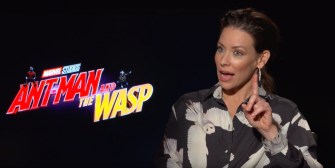 Another actor suffering for his art is Chadwick Boseman in his costume as Black Panther. “It’s hot. It’s blazing hot. Listen, it’s so hot. I’ve never been that hot before in my life, seriously,” Boseman told Business Insider. His Avengers co-star Jeremy Renner backs him up: “Terrible, sweating—if it takes you 30 minutes to go to the bathroom, that’s a problem.” 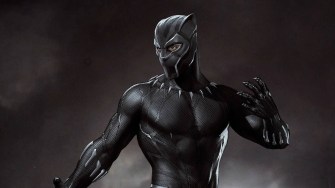 Lilly gets the bathroom part: “The idea that it took, like three people to get me in and out of the suit, and to go to the bathroom I needed to ask for help. I felt like I was three years old again.”

The actors in the MCU do also talk about how grateful they are for their jobs. Still, there’s a lot of, let’s just say “oversharing.” And it’s not as if the costumes of female characters have been much more comfortable, but there’s definitely been less grousing from them.

Lilly’ recalls, “I have been hearing Marvel male superheroes complain about their suits for years. And I got into my suit and I was wearing it, working in it, doing my thing, and I was like, ‘It’s just not that bad.” In fact, Lilly says, “I love my suit. I think my suit is killer. I think my suit is so cool. I think it’s powerful, it’s modern, it’s strong, sexy, and it made me feel like a superhero.”

Not that the complaints about such costumes are restricted to the MCU—it’s a DC thing, too. Henry Cavill has said of his Superman suit, ”I’d make mine a bit more flexible. Mine’s basically a onesie, so it’s tough to sit down.” Christian Bale complained of terrible headaches from his first Batman suit, so, as Cinema Blend notes, “it wasn’t until The Dark Knight that a live-action cinematic Bruce Wayne was able to turn his head while dressed as Batman.”

The Wasp knows why: “They’re just like, ‘What is this? This sucks. Why are we… why? Why do I have to go through this?” But it’s nothing new to women. “Whereas a woman’s like, ‘I don’t know. This is like normal,” Lilly says. “I wear heels to work. I’m uncomfortable all day. You get used to it. You tune it out.’”

Related
Starts With A Bang
Ask Ethan: What are white holes, and do they really exist?
In General Relativity, white holes are just as mathematically plausible as black holes. Black holes are real; what about white holes?
Life
Strange life forms create an “alien” ecosystem in an abandoned uranium mine
Slimy biofilms made up of bacterial and eukaryotic life forms have taken over an abandoned, flooded uranium mine in Germany.
Hard Science
Earth has an eerie “sodium glow,” and astronomers use it to image stars
Air currents in our atmosphere limit the resolving power of giant telescopes, but computers and artificial stars can sharpen the blur.
Health
How saliva changes the flavor of food
“It’s a liquid, but it’s not just a liquid.”
High Culture
Why are flood myths so common in stories from ancient cultures around the world?
Could the prevalence of flood myths around the world tell us something about early human migration or even the way our brains work?
Up Next
Surprising Science
New study: Wind power will work on Mars. This is a game-changer.
Wind power on Mars makes it possible for any rover or other craft to collect power at the poles or other areas on the planet that don’t get constant sunlight.