Most great philosophers get something wrong every once in a while. Kant acknowledged that his ideas on who should and shouldn’t vote were a bit difficult to back up.  Leibnitz argued that this is the best of all possible worlds. Bertrand Russell admitted that his strict pacifism was not applicable in a world with Nazis and changed his worldview accordingly. In most cases, the philosophers were just mistaken.

Sometimes, however, there are cases of philosophers who fudge the philosophy to promote a goal other than the advancement of knowledge.

Karl Marx, the German philosopher who conceived modern communism, was guilty of this on a few occasions. While a lot of his philosophical work is very good, he managed to earn a doctorate from Bonn writing about Greek philosophy, some of it is clearly trying to promote his worldview and the quality of the work suffers as a result. Here, we have cases where Marx bent the philosophy to fit his needs.

The first such problem is with Marx’s Labor Theory of Value. Simply put, this is the idea that the value of a commodity is entirely based on how much “socially necessary” human work was needed to create it. If a chair typically takes two hours to make, it has a value equal to something else that also typically takes two hours to make. Nothing else can produce more value, argues Marx, only adding human labor to a commodity can increase the value of that commodity.

Now, the first problem with this theory is rather obvious. It is empirically false. If it were the case that the only thing which can create value is human labor, we would expect to see the highest profits being earned in the industries that require the most people working in them, like resource gathering or textiles. However, the opposite is true. Given the amount of data that Marx had access to he should have known this.

There is a second problem as well. The point of the labor theory of value is to show how commodities come to have their prices. In an attempt to shore up his theory, Marx argues that prices can systematically vary from real value. However, by doing so, he removes the motivation of the argument. By making prices indirectly related to how much work was put into them, he has defeated his purpose. He also attempted to resolve the issue of labor-intensive industries having lower rates of profit than is expected, but the attempt suffers from technical issues. 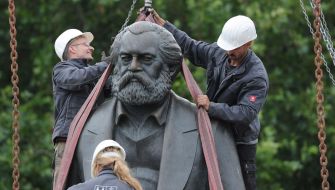 Workers in Berlin remove a statue of Marx to allow for the construction of a new subway line. (Getty Images)

Another area where Marx runs into problems is his theory of history. While questions exist as to how much gravity he placed on these ideas they became rather important to later communist thinkers. In short, his theory of history is based on the tendency of productive assets to increase over time and the inevitability of the victory of communism in the long run.

This would be less of a problem if Marx weren’t trying to advance “Scientific Socialism.” Which was presented as an alternative to utopian models of communism and was praised as being based on the scientific method. However, if there is no way to prove the theory false, it becomes more difficult to argue that there is any real “science” going on.

Marx himself had concerns with the practice of assigning circumstances prominence over people, which he laid out in Theses on Feuerbach.  If he later did the same thing or not is debatable.

The opinions of Bertrand Russell, who was a British philosopher and a committed democratic socialist, might be illuminating. His critique shows not only where Marx used poor philosophy to promote his politics but also how one can disagree with him and still hold left-wing opinions.

In his essay Why I am not a Communist Russell notes:

The theoretical doctrines of Communism are for the most part derived from Marx. My objections to Marx are of two sorts: one, that he was muddle-headed; and the other, that his thinking was almost entirely inspired by hatred. The doctrine of surplus value, which is supposed to demonstrate the exploitation of wage-earners under capitalism, is arrived at: (a) by surreptitiously accepting Malthus’s doctrine of population, which Marx and all his disciples explicitly repudiate; (b) by applying Ricardo’s theory of value to wages, but not to the prices of manufactured articles. He is entirely satisfied with the result, not because it is in accordance with the facts or because it is logically coherent, but because it is calculated to rouse fury in wage-earners. Marx’s doctrine that all historical events have been motivated by class conflicts is a rash and untrue extension to world history of certain features prominent in England and France a hundred years ago. His belief that there is a cosmic force called Dialectical Materialism which governs human history independently of human volitions, is mere mythology. 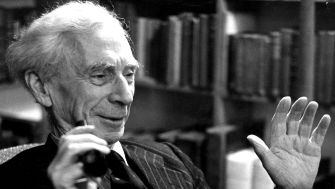 Bertrand Russell, who had critiques on pretty much every philosopher ever, in his old age. (Getty Images)

Karl Marx is a philosopher of unusual influence on world history. His ideas were revolutionary, as were his philosophical decedents. This does not put him above the standards we hold other thinkers to, however. When he was wrong, especially when it may have been done purposefully, he must be held to task. In these cases, we have seen how Marx was more than willing to do bad philosophy to promote his politics.

A great introduction to his ideas can be found here.

Related
Life
Scientists use CRISPR to insert an alligator gene into a catfish
Disease kills off 40% of farmed catfish. This gene protects them.
Neuropsych
How you breathe affects your brain
Your breathing rhythm influences a wide range of behaviors, cognition, and emotion.
Health
What happens when regular porn watchers abstain for a week?
Researchers watched for signs of withdrawal — but didn’t find any.
Neuropsych
Daily caffeine intake temporarily alters your brain structure
Compared to people who took a placebo, the brains of those who took caffeine pills had a temporarily smaller gray matter volume.
Thinking
Why you should laugh at yourself, according to Seneca and Nietzsche
“It is more human to laugh at life than to lament it.”
Up Next
The Present
This week in comments: February 4th—February 12th, 2018
We’ve got the biggest comments. The best comments. You’re going to have such good comments that you’re going to be sick of how good these comments are. Believe me.