I recently spent a full day at a major music festival observing police drugs dogs sniffing around the entrance, while their handlers bundled off festivalgoers into a nearby tent to have their internal orifices examined by policemen with latex gloves. I noticed that the Labradors followed procedure perfectly for about the first half hour of the day, sitting purposefully next to suspects. After half an hour or so, the dogs were clearly bored with their handlers’ game and/or so overwhelmed by the aroma of drugs coming from all directions, that they spent the rest of the day casually sniffing festivalgoers’ bottoms.

I was shocked to see that the dog handlers occasionally and seemingly randomly behaved in the same way when dogs sniffed punters’ bottoms, as when they had sat bolt upright next to a suspect. I couldn’t help but feel that it was a great injustice that it was clearly luck of the draw which poor festivalgoers were made to undergo the humiliation of unceremoniously spreading their nether regions before a torch-wielding policeman. Perhaps though, it wasn’t luck of the draw. As I watched, I became increasingly convinced that the dog handlers were the ones covertly selecting their targets, rather than the dogs themselves.

A groundbreaking study into the behavior of sniffer dogs and their handlers published by Lisa Lit in the journal Animal Cognition in 2011 supports my suspicion. Researchers tested drugs dogs and their handlers with a couple of Machiavellian tweaks to standard study protocol: Firstly, there were no drugs; secondly, the handlers were told that there were drugs hidden in various places inside a church, labelled by sheets of red paper.

In order to trick the dog handlers into believing that they were participating in a genuine drugs study, the researchers carried a box of 12 genuine triple-wrapped half-ounce bags of cannabis past the handlers while they pretended to set up the experiment. In reality the box was never even opened inside the church. Instead of drugs, sausages were placed in some of the various hidden locations around the church. Some of these locations were labelled as containing drugs — indicated by a sheet of red paper, while some locations that were labelled as containing drugs contained neither drugs nor sausages. The experiment was double blind; the experimenters were not aware whether a location was a decoy containing a pair of sausages or a decoy containing what the handlers had been led to believe was cannabis.

Despite there never being any drugs whatsoever in any of the locations used in the experiment, 225 alerts were issued by the 18 handlers and their dogs, every single one of which was, of course, a false alarm. To the dogs’ credit, the dogs were not swayed by the sausages, but to the handlers’ discredit, there were drastically more false alarms wherever the red markers told the handlers that there would be drugs.

So what went on here? Did the handlers simply cheat and pretend they’d seen their dogs show the correct responses to smelling drugs, or did the handlers somehow lead the dogs to provide positive responses with unconscious cues? This is a difficult question, which requires further research, but a clue to the likely answer lies a century ago in a horse called Clever Hans. 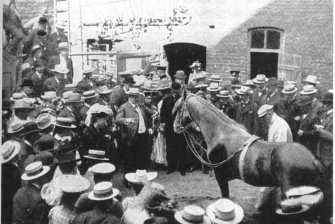 Clever Hans was a Victorian horse who wowed crowds by apparently counting and performing mental arithmetic. It wasn’t until an investigation by psychologist Oskar Pfungst that it finally became clear that the horse was in fact watching and interpreting the reactions of his human observers. The Clever Hans Effect may be a particularly important issue for dogs, which by their nature, are extremely adept at interpreting human cues, as any dog owner knows well.

Researchers have found some dogs will rely more strongly on human cues than even their own sight and smell when looking for food — going to look for food in an empty bowl that a human is pointing to, rather than a bowl full of food that it can see and smell. Dogs have also been shown to be able to interpret human eye contact, head and body orientation, and glances.

It seems that while drugs dogs certainly can detect smells such as drugs, if you are an innocent bystander and you don’t want a policeman probing your insides, it is just as important what a policeman’s subjective opinion of you is, as are the smells picked up by his or her dog. Whether or not this is constitutional under the Fourth Amendment, or fair in a civilized society, is a matter that should be up for debate. It is noteworthy that since Lit’s groundbreaking findings were published in 2011, we haven’t seen any follow up studies investigating the unanswered questions that have arisen from her research. According to an article published in Psychological Science, reliable sources have alleged that individuals with interests in drugs dogs have tried to shut down her research.

Regardless of their actual effectiveness, it has been argued that dogs can still be justified as a deterrent, even if it is their human handler who is really the one calling the shots. This defense is questionable however, as one recent study of ecstasy users demonstrated that most of the respondents had drugs in their possession the last time they witnessed a drugs dog and less than 7 percent of them were detected. Worryingly however, a minority of users responded by immediately consuming all of their drugs, putting themselves at risk of overdose, another fine example of how ill-thought-out policies can result in more harm than good.

Some scientists see religion as a threat to the scientific method that should be resisted. But faith “is really asking a different set of questions,” says Collins.
▸
5 min
—
with
Francis Collins
Up Next
Culture & Religion

Late night has become uninteresting and often unfunny, but all of that may change with the help of Stephen Colbert.