Outer space isn’t the last great frontier. There’s a place virtually unknown to modern science right here on Earth, lurking below its murky depths. As it stands, only a minuscule space—around 5-15% of the World Ocean’s floor, has been mapped, mainly from disparate sources. That’s quite a lot of unexplored real estate. Consider that the World Ocean covers 71% of the planet’s surface. This glaring knowledge gap won’t last long.

The Seabed 2030 project plans to step in and map the entire world’s ocean floor by 2030. This is an international collaboration, sponsored by Japan’s Nippon Foundation and the nonprofit GEBCO. GEBCO stands for: General Bathymetric Chart of the Oceans. The nonprofit is a part of both the International Hydrographic Organization and UNESCO.

Project officials plan to map some 140 million sq. miles (approx. 362,598,335 sq. km) total. Not only wide, the World Ocean is deep in most places. 93% of it is 650 ft. (200 m) down or deeper. A global bathymetric map would be quite a feat. But it’s possible with current technology. All told, the project is expected to cost $3 billion. Fortunately, the whole thing doesn’t have to be completed from scratch. 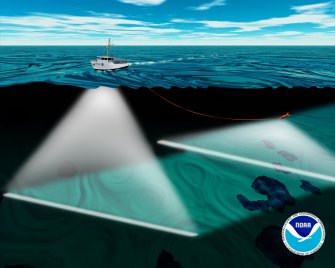 To map the ocean’s floor, ships will use a special kind of sonar called multibeam bathymetry. Image credit: The National Oceanic and Atmospheric Administration (NOAA).

Fishing boats, pleasure craft, and commercial companies are encouraged to contribute to the cause. These include companies like Ocean Infinity, which is currently searching for Malaysia Airlines flight MH370. Another is Dutch undersea energy exploration company Furgo, which previously searched for the famous missing flight. Furgo alone has surveyed approx. 25,100 sq. miles (65,000 sq. km) of the ocean floor. All interested parties can send their data to the International Hydrographic Organisation in Monaco, which hosts GEBCO. The data will eventually be available to the public through an iOS app.

Bathymetry is the study of the beds or floors of bodies of water. Today, it’s synonymous with the term “submarine topography.” The ships used to fill in the gaps for this project will utilize a sonar system called multibeam bathymetry. This shoots out sound waves in all directions underneath the hull and picks up topographic formations when they bounce back.

Being able to ensonify the entire seafloor allows the ship’s computer to create high resolution, 3D maps. Data collection will be made through underwater autonomous vehicles (UAVs) or drones. These are cost-effective and can dive to parts of the ocean dangerous to humans and where sensing technology has a hard time reaching.

The project was officially launched at the United Nations Ocean Conference in New York City, on June 6, 2017. The majority of the work however, is expected to take place in the 2021-2030 period. Once all of the data is collected, academic research centers in the US, Germany, Sweden, and New Zealand will begin to go through it, each focusing on a specific ocean basin. The Global Center of the project, responsible for centralization and management, is the National Oceanography Center, in Southampton, the UK. Here, researchers will sew all the pieces together. 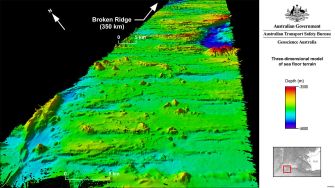 The undersea landscape is astounding. There are trenches so deep, they make the Grand Canyon look like a dimple. There are vast, towering mountain ranges, incredible rock formations, valleys, volcanoes, channels, and plains. Gaining greater knowledge of seafloor topography might help us better understand weather patterns, manage conservation efforts, and maintain the world’s fisheries, which today feed millions. We may even gain knowledge of how to better protect coastal communities from dangerous storms like Tsunami’s. On another front, we could make headway in plate tectonics—specifically into the movements of the southern continents in prehistoric times.

“We know more about the surface of the Moon and Mars than our own backyard,” Seabed 2030 director Satinder Bindra told Reuters. “For too long now we have treated our own oceans as a forgotten frontier.” Bindra calls the project “essential.” At a meeting February in Tokyo, he said that since its launch, “the project has made rapid progress, drawing on the experience of some 28 international organizations and networks spread across more than 50 countries.”

The main focus isn’t commercial but scientific. That said, it’s thought that the project will uncover vast amounts of mineral wealth and untapped resources. Oil, diamonds, precious metals, rare minerals, and yes, even sunken treasure might be discovered. Of course, there’s a fear that resource exploitation could lead to further environmental degradation. Besides this, the project could get hung-up in geopolitical hotspots. Certainly, areas of the South China Sea, the Red Sea, and the Gulf of Aden will be difficult to gain access too. Still, project officials believe they’ll have the map in its entirety by the deadline they’ve imposed.

Related
13.8
Why the origin of life and the Universe itself might be forever unknowable
There might be a hard limit to our knowledge of the Universe.
Hard Science
200 years of exploring Antarctica
What we’ve learning from the world’s coldest, most forbidding, and most peaceful continent.
Sponsored
4 misleading personal finance tips
Personal finance advice is often over-simplified and fails to consider economic research or people’s unique circumstances.
Strange Maps
Europe’s stunning digital divide, in one map
Some Europeans really don’t want to use the internet.
Thinking
Bonhoeffer’s “theory of stupidity”: We have more to fear from stupid people than evil ones
Evil is easy to identify and fight against; not so with stupidity.
Up Next
Mind & Brain
How does the brain process speech? We now know the answer, and it’s fascinating
NYU researchers may have finally put to rest the mystery of how speech is processed in the brain.