Billions of people enjoy a nice beer in the evening to unwind. Beer is the third most consumed beverage in the world after water and tea and has been an essential part of the human diet for at least 7000 years. Even for those of us who don’t like the stuff, the history of beer is a curious thing to study. Especially since it is Women’s History Month and the history of beermaking is primarily a history of women.

A history of female brewers

Beer was originally produced nearly exclusively by women, so say archeologists who study fermentation. With the ancient division of labor putting men out on the hunt, it was up to the women to collect the ingredients and brew the drinks. Evidence of brewing can be found as far back as the fifth millennium BCE in Iran and may have been referenced by an alewife in The Epic of Gilgamesh, the oldest work of literature known.

It is thought that women brewed beer nearly exclusively across Mesopotamia right up until the rise of the Roman Empire when records show an increased number of male brewers in Egypt. Women continued to be the primary producers of beer in northern Europe, with women having a near monopoly on the production of homebrew in Viking Scandinavia. This tendency did decline, however, as feudalism began to restructure society during the dark ages. 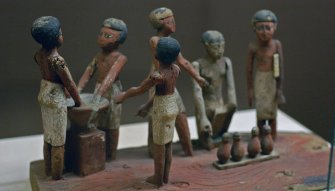 While men continued to take over the business of brewing, this didn’t stop women from still having some role, particularly in nunneries. The German polymathic nun St. Hildegard of Bingen has the distinction of being the first person to publicly recommend the use of hops in brewing for their “healing, bittering, and preserving” properties long before anybody else.

However, things would go from difficult to life-threatening for many women in brewing, as persecution against suspected witches began to rise in Europe.

In the dark ages, brewsters, women who brewed beer, had some rather odd advertising methods. To be noticed in crowded markets, they tended to wear tall, pointed hats. To indicate when a brew was ready, broomsticks would be placed in the doorways of alehouses. Images of frothing cauldrons full of ready product and six-sided stars to indicate the quality of the brew also abounded. Lastly, out of manifest necessity, cats would be kept in the brewhouses to protect the grains from mice. 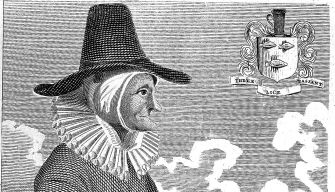 An image of Mother Louise, an Alewife in Oxford in the 1600s. Her entire ensemble screams “witch.” (Wikicommons, original image by David Loggan)

While the connection between the imagery of a witch and a brewster is clear, the reasoning behind it remains a subject of debate. A writer for the German Beer Institute (of course they have one!) muses that “In a culture where beer defines part of the national character, the question of who controls the brew is paramount. He who has his hand on the levers of power, also has his thumb in the people’s beer mug”. With the enactment of standards of quality for beer in the 1500s, the oldest food purity laws still on the books, many women were forced out of the market due to increased production costs. In a few hundred years breweries were monopolized by men.

It would also be dangerous to be a woman with extensive knowledge of how herbs and plants could mix well together to provide nourishment and healing to the drinker when the inquisitions were at their height across Europe. As the production of beer would require these very skills, it wouldn’t be difficult to confuse the local alewife with a witch without malice.

Some of the change in the ratio of men to women in brewing comes down to old-fashioned ideas on what women ought to be doing with their time. In 1540 the city of Chester banned women between the ages of 14 and 40 from being alewives in hopes of moving the trade towards women outside of childbearing age. While women in the profession during that time in England were accused of cheating customers and having several “undesirable” traits, records show women were no less trustworthy than men at the task.

Which brings us to today

Women have long had a hand in brewing. With the poor quality of water before modern sanitation methods, these women played a vital part in keeping humanity healthy and nourished. While the occupation has long since been taken over by men in the west, it remained a woman’s job in parts of Latin America and Africa. As women begin to re-enter the brewing industry with fewer fears of being burned as witches, they can step into the shoes of countless brewsters before them. Beer lovers may rejoice at this news.

Related
Life
Scientists use CRISPR to insert an alligator gene into a catfish
Disease kills off 40% of farmed catfish. This gene protects them.
Neuropsych
How you breathe affects your brain
Your breathing rhythm influences a wide range of behaviors, cognition, and emotion.
Health
What happens when regular porn watchers abstain for a week?
Researchers watched for signs of withdrawal — but didn’t find any.
Neuropsych
Daily caffeine intake temporarily alters your brain structure
Compared to people who took a placebo, the brains of those who took caffeine pills had a temporarily smaller gray matter volume.
Thinking
Why you should laugh at yourself, according to Seneca and Nietzsche
“It is more human to laugh at life than to lament it.”
Up Next
Culture & Religion
The Vatican is hosting a hackathon right now. But why?
When in Rome… do as the Romans do?