In many ways, the 2018 Winter Olympics is a celebration of all that is right about the world. The most gifted athletes from different countries come together to try their hardest to push the boundaries of human achievement. About two billion people around the planet tune in and root for their favorites, while also appreciating the best competitors from other countries.

But as has often been the case, the Olympics are also an opportunity for political grandstanding. And this year promises to be no different, with the United States and North Korea using the event to score propaganda points.

For its part, North Korea sent fliers to South Korea to commemorate the start of the Olympics. Dropped from balloons, these fliers show two cartoony mascots that stand under Olympic rings. “Welcome, guests from Pyongyang!” says the flier, seemingly talking to the 280 people of the North Korean team that traveled to take part in the games. 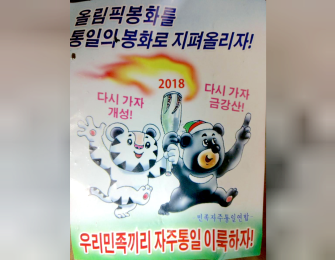 A North Korean propaganda flier commemorating the opening of the 2018 Winter Olympics. It was found in Seoul. Credit: NK News/Handout via REUTERS

While these fliers are fairly innocuous and should not provoke much outrage, North Korea often sends more overtly anti-South Korean leaflets by utilizing balloons. These often end up strewn around public spaces or mountains. One can imagine North Korea continuing to use this strategy throughout the Olympics to promote its own narrative.

North Korea’s other big action to celebrate the Olympics was a giant military parade that took place on January 8th, just a day before the Opening Ceremony. The parade was highlighted by a show of the intercontinental ballistic missiles Hwasong-15. The four missiles, atop nine-axled launchers, have the projected range of more than 8,000 miles, putting the U.S. east coast in its range. 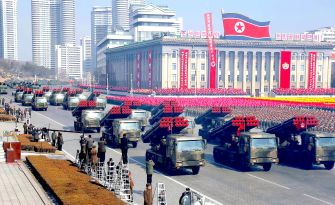 It’s not hard to get the message sent by the parade: North Korea is not to be underestimated. North Korea’s President Kim Jong-un pointed that out as well by stating that his country has become a “world-class military power,” according to BBC.

In general, the U.S. and its allies were against the North Korean parade being held, calling it provocative. Indeed, the North Koreans moved up the date of the parade, which celebrates the founding of the Korea People’s Army, from its usual date in April.

The American president Donald Trump, on the other hand, who seemingly was inspired by the idea of parades after observing Bastille Day celebrations in France, called for the U.S. to have a military parade of its own. While many critics took issue with the idea—with the U.S. Navy Seal who shot Bin Laden calling it ‘third-world bullsh*t”—the Pentagon is already drawing up plans. The parade could take place on July 4th.

Whether such a show of American force will send North Korea, Russia or anyone else a strong message remains to be seen. Vice President Mike Pence, who leads the U.S. delegation to the Games, came out in full-throated support of the idea, calling it an occasion to honor the armed forces.

“I think any opportunity we have to celebrate the men and women of the armed forces of the United States is a great day,” Pence said. “I heartily support the president’s call to celebrate our military.” 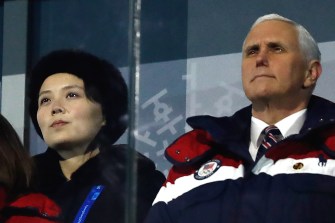 Pence also tried to make a distinction between the American and North Korean parades, taking issue with the rogue regime’s use of their display of military might to make “menacing threats” while saying our parade would be just a celebrations of the troops (which, one can argue, was the exact reason for NK’s parade).

“Make no mistake about it, what we witnessed in Pyongyang, and we witnessed again yesterday, on the eve of the Olympics — what [South Korean] President Moon [Jae-in] said last night, he hopes will be an Olympics of peace — was once again an effort on the part of the regime in Pyongyang to display their ballistic missiles, to display a military that continues to make menacing threats across the region and across the wider world,” explained Pence. “I think in the United States of America, just as in France — where the president was impressed on Bastille Day — we can celebrate our troops, not in any way ever be associated with the provocations of the North.”

Pence also reiterated the White House position that North Korea needs to denuclearize before any progress in relations between the countries can be made.

In another rebuke, Pence came to the Olympic Games with the father of Otto Warmbier, who recently died, shortly after being returned to the U.S. following a two-year imprisonment by North Korea. 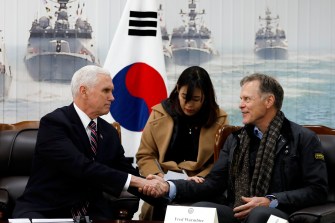 While we have all the reasons in the world to remain skeptical, so far the optics out of the Olympics look good for North Korea’s “sports diplomacy”. The images of its athletes marching and smiling hand-in-hand with South Korean athletes could go a long way to normalize the version of North Koreans most people around the world have in their heads.

Usually demonized in the Western press, North Korea has an opportunity to show that it can be a responsible and not-so-different member of the world community—just one with nuclear weapons. If the country softens its image, the idea of it having nuclear weapons could become much more accepted internationally.

Compared to the surprises and global provocations often stoked by the White House, North Korea doesn’t have to do as much as you’d think to become some version of the adult in the room. Of course, as it amps up its missile testing schedule after the event, tensions are bound to flare up once more.

Related
Starts With A Bang
The sober truth about finding the Universe’s first stars
The Universe certainly formed stars, at one point, for the very first time. But we haven’t found them yet. Here’s what everyone should know.
Life
Our antidepressant drugs are affecting animals and ecosystems
A toxicologist explains the impacts of antidepressants on fish — and no, they’re not getting any happier.
The Past
Ancient migration: Bering Strait land bridge from Asia to North America was not a one-way road
Ancient humans crossed the Bering Strait land bridge from Asia into North America. But some of them went back.
Sponsored
Want to boost your happiness? Buy experiences, not material possessions
Some experiences continue to pay dividends time and time again.
High Culture
Did Paul Cézanne hide an early self-portrait underneath a 160-year-old still life?
To answer that question, we may have to figure out when the famed painter started to go bald.
Up Next
Personal Growth
5 steps to disrupting your comfort zone and embracing creativity
In her new book, Creative Change, social psychologist Jennifer Mueller says everyone loves the idea of creativity even while we prefer the status quo.