The majority of Germans don’t trust the U.S. as a political ally, according to a new survey that highlights anti-Americanism that’s both deep-rooted and growing in the nation.

The survey, issued by German public broadcaster ZDF to 1,200 randomly selected citizens, showed that 82 percent of Germans don’t see the U.S. as a “reliable partner for Germany when it comes to political cooperation,” while only 14 percent do.

Russia and China are seen more favorably: 58 percent of Germans see Russia as a reliable political ally, while 43 percent say the same for China.

The report comes in the wake of German Chancellor Angela Merkel’s critical comments on the U.S. pulling out of the Iran nuclear deal, in which she said Europe “needs to take its fate into its own hands,” and that, “it’s no longer the case that the United States will simply just protect us.”

“It’s even worse than that,” Fischer said. “The American president is deliberately destroying the American world order. I was used to NATO being attacked by the left wing of the Green Party, but not by the American president! From an economic policy point of view, Trump is challenging Germany’s business model, which has been geared toward exports from the very beginning. Many are saying that we shouldn’t put up with that. I find this reaction understandable, but also kind of cute. What can we do? Given the current balance of power, sometimes all you can do is gnash your teeth.”

That issue of Der Spiegel, by the way, features Trump giving the middle finger to the reader with the English caption “Goodbye, Europe!” 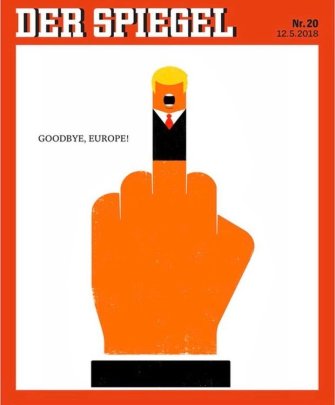 An editorial in the magazine reads:

“The West as we once knew it no longer exists. Our relationship to the United States cannot currently be called a friendship and can hardly be referred to as a partnership. President Trump has adopted a tone that ignores 70 years of trust. He wants punitive tariffs and demands obedience. It is no longer a question as to whether Germany and Europe will take part in foreign military interventions in Afghanistan or Iraq. It is now about whether trans-Atlantic cooperation on economic, foreign and security policy even exists anymore. The answer: No.”

Needless to say, many Germans think the relationship is failing.

The most recent meeting between the leaders of the nations was in April when Merkel and President Donald Trump had mostly cordial yet unproductive discussions in Washington about the $65 billion trade deficit the U.S. had with Germany in 2017, and also about European military spending and North Korea and Iran. Also in April, the German news agency DPA released a survey that showed 39 percent of Germans think their government should be more critical of the Trump administration. 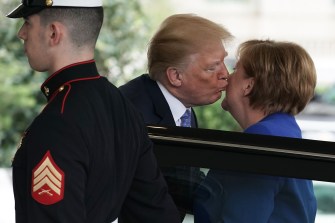 In a gesture that’s not a tradition in Germany, Trump kisses Angela Merkel on the cheek as she arrives at the White House. (Photo by Alex Wong/Getty Images)

This bad blood isn’t new. German anti-Americanism has been simmering since it was the official state policy of East Germany, changing shape in the decades following unification, and heating up during the Iraq War, which Germany managed to avoid, though it still committed thousands of troops to Afghanistan. Now, Trump seems to be stoking the fires with his explicit ‘America first’ policies. But that’s not to say Germans saw former President Barack Obama as anything like a trans-Atlantic saint.

In 2015, a Pew Research Center survey showed Germany had the least favorable view of the U.S. compared to all other European nations, with only about 50 percent of Germans expressing positive feelings toward Obama. In 2013, following Edward Snowden’s revelations of mass government surveillance, Germany pulled out of a long-standing information sharing agreement with the U.S. and U.K.

Some German foreign-policy experts have expressed concern over growing anti-American sentiment. In a 2017 manifesto titled “In Spite of it All, America” published in Germany’s Die Zeit newspaper, the authors wrote that “If Germany wants to be an effective actor in Europe, it needs the United States.”

“We are worried about those, mostly from the left, who finally feel liberated to break with America, and we want to say that America is more than Trump, there will be America after Trump, that our strategic dependence on the United States remains,” Jan Techau, who is one of the signatories, director of the Richard C. Holbrooke Forum at Berlin’s American Academy, and a former head of Carnegie Europe, toldThe New York Times.

Related
The Present
How heat pumps of the 1800s are becoming the technology of the future
Innovative thinking has done away with problems that long dogged the electric devices — and both scientists and environmentalists are excited about the possibilities.
Starts With A Bang
JWST’s hunt for most distant galaxies gets double boost
Along with gravitational lensing and ALMA’s incredible long-wavelength spectroscopy, JWST is reshaping our view of the early Universe.
Thinking
Finding your essential self: the ancient philosophy of Zhuangzi explained
Adopting a healthy scepticism towards inherited ideas means “emptying the container of the Self.”
The Future
Startup’s bladeless flying car is designed to reach Mach 0.8
One of Jetoptera’s VTOLs is expected to reach speeds of around 614 mph, about as fast as a commercial jet airliner.
Health
New blood types are often discovered following medical disasters
New blood types are regularly discovered by an unusual absence or an unusual presence — both of which can result in tragedy.
Up Next
Career Development
4 Tips to Create a Sense of Purpose in the Workplace
Purpose and meaning are now more important than ever in the workplace. This is particularly the case with the rise of the millennial generation in the workforce.In some ways, it […]