The United States has imposed tariffs on solar panels, washing machines, and parts for them coming from China.

One of the stated goals is to stimulate U.S.-based companies, and this might actually work; however, some foreign companies are actually considering moving facilities to the United States to avoid the penalties. Other companies already making solar panels here believe this move will make them more competitive, despite the influx of companies.

Companies such as Whirlpool, which still makes washing machines in the USA, and solar manufacturers Suniva and Solar World Americas, seem to be the most likely to benefit from the tariffs.

The U.S. International Trade Commission (ITC) found that imports were adversely affecting American companies (and employees) because China has been selling “artificially low-priced” solar components inside the U.S., assisted by Chinese state subsidies. 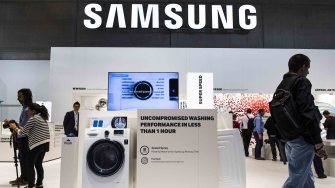 A washing machine is featured at the home appliances section at the booth of South Korean electronics giant Samsung ahead of the opening of the 55th IFA (Internationale Funkausstellung) electronics trade fair in Berlin on September 3, 2015. (JOHN MACDOUGALL/AFP/Getty Images)

According to the BBC, the first 1.2 million imported washing machines will have a 20% tariff imposed in the first year, followed by a 50% tariff on machines above that number. By year three, these tariffs drop to 16% and 40%, respectively.

For solar cells, about 11.5 million panels will be allowed in tariff-free annually. Beyond that, an increase in tariffs the first year will be 30%, falling to 15% by the fourth year.

So why are some opposed to the tariffs?

One large source of opposition comes from the Solar Energies Industry Association (SEIA), which claims that the companies who filed the complaints with the ITC are actually owned by foreign companies, in an attempt to cover for bad business practices.

But the SEIA also represents solar installers, a group which stands to take a large hit from the taxes as less residential and commercial builders opt for solar given the higher prices.

Time will tell whether the tariffs benefit American companies and workers. These kinds of moves can simply cause companies in China to move elsewhere—like Thailand—and begin again. 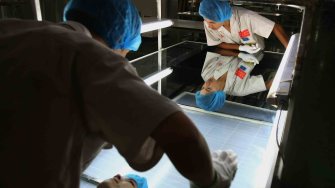 BAODING, CHINA – JUNE 24: Workers examine the photovoltaic board product at the plant of Tianwei Yingli Green Energy Resources Co., Ltd on June 24, 2009 in Baoding, China. China’s top economic planning agency will soon submit a draft support plan of the country’s new energy industry to the State Council for approval, a plan that would focus on nuclear power and renewable energy as wind and solar power, according to an official of the National Bureau of Energy. (Feng Li/Getty Images)

Related
Starts With A Bang
The galaxy cluster that broke modified gravity
19 years ago, the Bullet Cluster provided an empirical proof for dark matter. Even today, modified gravity still can’t explain it.
Neuropsych
Psychology studies that go viral are likelier to be bogus
A new 20-year analysis of over 14,000 psychology studies finds that a study’s media coverage is negatively linked to its replicability.
The Future
How a device transmits radio waves with almost no power
Apart from the energy needed to flip the switch, no other energy is needed to transmit the information.
The Present
Radical idea: Redraw the U.S. map as a nation of city-states
While cities drive national economic growth, their political geography means they cannot effectively deal with inequality, poverty, and other socioeconomic problems.
The Learning Curve
Why do high IQ people stagnate in their careers? Emotional intelligence
Research suggests that emotional intelligence is more vital for success than IQ.
Up Next
Politics & Current Affairs
Chinese scientists clone two monkeys—and the implications are vast
This latest breakthrough allows for a limitless production of clones.