The American Freedom Defense Initiative (AFDI), an odious right-wing organization dedicated to spreading offensive messages about Muslims, won a federal court battle this week against the Metropolitan Transit Authority (MTA) in New York City. In 2014, AFDI put in an order for ad space on 100 public buses and subways for four messages, but the MTA approved only three. The rejected ad was this one:

The ad, which draws on a quotation from Hamas, a Palestinian organization deemed a terrorist group by the United States and many other countries, parodies a public education campaign developed in the past few years by the Council on American-Islamic Relations (CAIR), an advocacy group seeking closer ties between Muslims and the broader public. Here is one of the ads in the #MyJihad series, an attempt to reclaim the Muslim concept of jihad from its common associations with “holy war” and terrorism: 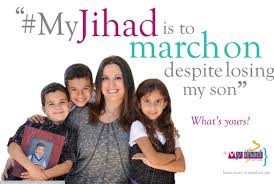 Critics of the AFDI ads, and there are many of them in both the Muslim and non-Muslim communities, point out that the messages portray Muslims in a sharply critical light and promote Islamophobia, a fear of Muslims. The critics are right. With these ads, Pamela Geller, the head of AFDI (pictured in the photo atop this post), is waging a campaign to undermine CAIR’s attempt to humanize American Muslims. The images and messages are chosen to frighten members of the public and to associate all Muslims with radical jihadist organizations abroad. They are awful.

In explaining its decision to refuse the ad, the MTA did not make any mention of its offensive nature or its promotion of anti-Muslim sentiment. Instead, curiously, the transit authority told AFDI that its ad crossed the line because of its propensity to incite violence against Jews. This is because mere “offensiveness” is a non-starter as a legal argument. Here is an excerpt from a letter sent to the AFDI’s senior counsel from Jeffrey B. Rosen of the MTA:

[M]ost reasonable New Yorkers would [not] interpret the “Killing Jews” ad as urging Muslims to kill Jews as a matter of religious obligation. Although the required disclaimer would identify the ad’s sponsor as AFDI, not Hamas, that is likely insufficient, by itself, to alert observers that the “Killing Jews” ad and its command to kill Jews should not be taken at face value, given AFDI’s obscurity and its vague name…

In ruling for AFDI, Judge John G. Koeltl held that while the ads are “offensive … they … are still entitled to First Amendment protection.” Echoing a similar ruling from 2012, Judge Koeltl found the MTA’s reasoning “thoroughly unpersuasive.” New Yorkers, he wrote, are more “tolerant” than the MTA believes them to be. More to the point, “there is no evidence that seeing one of these advertisements on the back of a bus would be sufficient to trigger a violent reaction.” Similar ads have appeared on buses in San Francisco and Chicago, spurring no violent outbursts. In sum, “[a]lthough the ad may be jarring to some and offensive to others, the defendants have not shown that the ad’s recitation of the quote from Hamas TV would tend to incite an ‘immediate breach of the peace.'” A simple “fear of such spontaneous attacks, without more, cannot override individuals’ rights to freedom of expression.”

Many have found Judge Koeltl’s decision disappointing, or worse. Of the hundreds of comments on an Al Jazeera news report on the ruling, there are numerous condemnations of the decision as “racist,” ”stupid,” and inspired by “Zionism,” among others. But these are badly misplaced charges: The decision is securely grounded in well-established First Amendment jurisprudence. The right to free expression in the First Amendment protects even the most offensive, hurtful speech. It permits Nazis to march down a street in a town full of Holocaust survivors. It allows members of the virulently anti-gay Westboro Baptist Church to hold up signs saying “God Hates Fags” at the funeral of a slain Marine. And it provides sanctuary to pro-life protesters seeking to dissuade women entering abortion clinicsfrom going through with the procedure. None of this speech is refined, polite, civil expression. None of it contains even a minimal level of reasoned discourse. Like the awful ads the AFDI will apparently foist on the New York City bus-riding public, these forms of speech are offensive, hateful, hurtful, and may even, in Chief Justice John Roberts’ words, “inflict great pain.”

When I ran the Philadelphia marathon several years ago, I almost threw up when I was forced to run past a half-mile of images of bloody aborted fetuses in the final stretch; the First Amendment protects this disgusting form of political protest. Freedom of speech does not allow for exceptions based on the content or viewpoint of the expression. Speech may be curtailed or punished, the Supreme Court has held, only in certain rare circumstances where national security is at stake, violence might imminently break out, an individual’s reputation is on the line due to malicious lies, or advertisers make false claims about a product.

There are strong justifications for protecting speech so robustly that terrible ads with anti-Muslim messages are permitted on the sides of public buses. Without wide-open discourse, the state suddenly becomes a highly effective censor of the public square. An MTA empowered to selectively approve which messages it broadcasts could reject Earth Day ads or permit campaign advertisements for one political party only. It could agree to put up only messages approved by the Koch brothers. Or only messages approved by George Soros. And even if the state is even-handed in its censorship, banning only “offensive” speech, it would pull the plug on most everything people say, as few ideas are inoffensive to none. By bringing nearly all speech under the umbrella of the First Amendment, the courts preserve individual liberty and make democracy — a form of government that depends on free discussion — possible.

So to answer the question posed in the title of this post, there is no legal mechanism by which the MTA could refuse to put up the AFDI’s terrible ad. And for good reason.

On July 4, we celebrate the tenth anniversary of the discovery of the Higgs boson, the missing piece of the Standard Model of particle physics.
Up Next
Words of Wisdom

Take It From Lee Iacocca: ‘Motivation is Everything’

Words of Wisdom from the legendary Chrysler executive: “Motivation is everything. You can do the work of two people, but you can’t be two people. Instead, you have to inspire the next guy down the line and get him to inspire his people.”