Russian submarines have been lurking thousands of meters deep in the North Atlantic near the communications cables that connect phone calls, texts, and internet service from North America to overseas nations.

The motive for the increased submarine activity is unclear, though it’s possible Russia is researching ways it could disrupt, destroy, or tap into the data lines in the future.

“We are now seeing Russian underwater activity in the vicinity of undersea cables that I don’t believe we have ever seen,” said U.S. Navy Rear Adm. Andrew Lennon, the commander of NATO’s submarine forces. “Russia is clearly taking an interest in NATO and NATO nations’ undersea infrastructure.”

There’s estimated to be more than 400 garden hose-sized fiber-optic cables running a total of 620,000 miles under the sea. Most of the cables are owned by private telecommunications companies like Microsoft and Google, and together they carry the bulk of the world’s calls, emails, and $10 trillion in daily financial transactions. 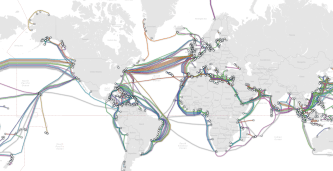 The Russians “are doing their homework and, in the event of a crisis or conflict with them, they might do rotten things to us,” Michael Kofman, a Russian military expert at nonprofit research group CNA Corp., told the Associated Press.

The 354-foot Russian ship Yantar, part of the Main Directorate of Deep Sea Research, a government organization that conducts reconnaissance, underwater salvage, and other tasks, is one ship that’s been spotted over the underwater cables.

A Russian state TV network has said the ship can “jam underwater sensors with a special system” and connect to top-secret cables.

Steffan Watkins, an information technology security consultant in Canada tracking the ship, told the Associated Press there’s no evidence the Yantar is doing anything nefarious, though he wonders what it’s up to when floating over the cables or when its Automatic Identification System tracking transponder is off.

“I don’t think these are the actual guys who are doing any sabotage,” he said of the ship’s crew. “I think they’re laying the groundwork for future operations.”

But telecommunications activity in the U.S. wouldn’t completely shut down even if a Russian vessel did snip a few cables in the Atlantic, partly because traffic could simply be rerouted to cables under the Pacific.

“[Internet service] wouldn’t work very well or be the highest quality, but it’s not like there wouldn’t be any communication happening,” Alan Mauldin, research director at TeleGeography, a market research firm that specializes in telecommunications, told Wired.

In fact, underwater data cables are frequently damaged, almost always unintentionally by underwater earthquakes, rock slides, anchors, or boats. It would take a massive, coordinated attack on the cables to devastate international telecommunications capabilities. And even in that event, you would still be able to email people in the U.S., but “people in Europe wouldn’t see your silly cat video you posted on your Facebook profile,” Mauldin told Wired.

“Arguably, the Russians wouldn’t be doing their jobs if they couldn’t threaten underwater cables. Certainly, NATO allies would not be doing theirs if they were unable to counter that,” Adam Thomson, a former British ambassador to NATO, told The Washington Post.

Still, NATO has plans to reestablish a command post in the North Atlantic to bolster defenses in response to the increased submarine activity that some have likened to that of the Cold War.

Related
The Past
The Wild West was lawless and chaotic — and the police helped keep it that way
Lawmen and outlaws were often the same people.
Thinking
6 great philosophers and how they used their political power
Most philosophers merely contemplate the world, but what about the ones who actually tried to change it?
Neuropsych
Asthma drug brings back “lost” memories
In a study involving mice, scientists used two different techniques — one optogenetic and one pharmacologic — to recover “lost” memories.
Stoicism: How to turn your sadness into strength
Chloé Valdary shares the ancient Stoic principle that can defeat modern despair.
▸
7 min
—
with
Chloé Valdary
Hard Science
3 new studies indicate a conflict at the heart of cosmology
The Universe isn’t as “clumpy” as we think it should be.
Up Next
Politics & Current Affairs
Why was Martin Luther King Jr. a socialist?
We often bicker and argue over what our national heroes believed in. Why did Dr. King believe in moving towards socialism?