Addressing the Russian parliament for nearly two hours in a venue just outside the Kremlin, Putin outlined several new weapons: cruise missiles, underwater drones, and a hypersonic missile that can travel several times the speed of sound.

All of the weapons are reportedly nuclear-powered, a feature that would significantly extend the range of the missiles. The new hypersonic cruise missile would be able to carry a nuclear warhead and fly “with a practically unlimited range and an unpredictable flight path, which can bypass lines of interception and is invincible in the face of all existing and future systems of both missile defense and air defense,” Putin said.

The underwater drones could also launch a nuclear warhead from anywhere in the world.

“Means to resist them simply don’t exist in the world today,” Putin said of the underwater drones.

His speech was accompanied by graphics that showed how the weapons could theoretically bypass U.S. naval defense systems. 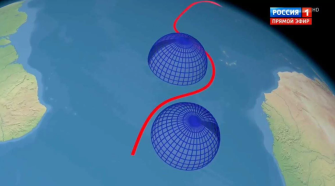 Russian lawmakers applauded after being shown videos of the weapons.

Putin’s claims are hard to verify. But if Russia had been testing nuclear-powered weapons, there should theoretically be evidence of it, as Reuter’s Gerry Doyle noted on Twitter.

it strikes me that if russia really did test a nuclear-powered cruise missile, and they have not figured out a way to keep it from spraying radioactive particles, there should be some atmospheric traces

But it’s possible the U.S. has already detected those traces, as Philip Bump implied in an article for the Washington Post:

“Interestingly, recent news reports indicate that radioactive particles have been identified over northern Europe and Alaska.”

The Pentagon said it’s aware of Russian attempts to develop nuclear-powered missiles, but that missile tests had so far failed.

U.S. officials say Russia's nuke powered cruise missile not operational yet, still in 'R&D' phase and has crashed recently in testing in the Arctic, despite claims by Putin today.

Putin’s chest-thumping comes just weeks before Russia’s presidential election on March 18, which he is expected to win. It would mark his fourth term in office.

The Russian president has run a platform that emphasizes his strength and military prowess, a message that was driven home at the end of Thursday’s speech as Putin rose for the national anthem, a giant Russian flag appearing on a screen behind him. The idea: A vote for Putin is a vote for national security, as the BBC noted.

Putin’s speech could also be viewed in the context of President Trump’s recent unveiling of the Nuclear Posture Review, a document that outlines plans to bolster and expand the U.S. nuclear arsenal. In his State of the Union speech, Trump said he intends to build an arsenal “so strong and powerful that it will deter any acts of aggression.”

This likely made it easy for Putin to frame his country’s move as a response to U.S. weapons development. But experts say Russia has been expanding its nuclear capabilities for years.

In 2001, President George W. Bush withdrew from the 1972 Anti-Ballistic Missile Treaty that the U.S. had signed with the then-U.S.S.R. Putin said the withdrawal was a “mistake,” and, some claim, he’s been fuming about the decision ever since.

“This is more about Bush’s decision to withdraw from the ABM treaty and the failure of either Bush or Obama to address Russian concerns about missile defense than it is about [the Nuclear Posture Review],” said Jeffrey Lewis of the Middlebury Institute to the Washington Post.

Still, it’s easy to interpret parts of Putin’s speech on Thursday as being marked with resentment toward the West, which he said had been “ignoring us. Nobody listened to us. Well listen to us now.”

It remains unclear how much of Putin’s tough talk is true.

“Nobody knows how much is bluster,” Richard Aboulafia, vice president of analysis at Teal Group, an aerospace and defense consultancy, told CNN.

Related
13.8
The weirdness of quantum mechanics forces scientists to confront philosophy
Though quantum mechanics is an incredibly successful theory, nobody knows what it means. Scientists now must confront its philosophical implications.
Neuropsych
Why is a Starbucks loyalty rewards program making customers so angry?
The rewards price to get a free cup of hot coffee at Starbucks is going up.
Empowering growth
7 essential management training topics for every team leader
From emotional intelligence to problem solving, these management training topics will set team leaders up for success.
Thinking
What if you could rewire your brain to conquer suffering? Buddhism says you can
For Buddhists, the “Four Noble Truths” offer a path to lasting happiness.
Hard Science
Solved: 500-year-old mystery about bubbles that puzzled Leonardo da Vinci
The solution involves the infamous Navier-Stokes equations, which are so difficult, there is a $1-million prize for solving them.
Up Next
Surprising Science
New drug kills flu virus in one day, gets fast-tracked to approval
Welcome news as the flu pandemic begins to subside.