Many of us had never heard of Steve Bannon before the 2016 presidential election, and, at that, not until somewhere in the middle of that extraordinary battle. We were introduced to him as a former executive chairman of Breitbart News, a news and commentary website on the far right of the American political spectrum. Bannon seemed to have now-President Donald Trump’s ear in shaping the candidate’s message, and since the election, his importance has become even clearer: Bannon was recently added to the Principals committee of the National Security Council (NSC). It’s a surprise. He has little, if any, direct knowledge of national security, and he replaces two people who most certainly do, the chairman of he Joint Chief of Staff and the director of national intelligence.

In the chaos created by flurry of controversial presidential orders coming out of the White House in the first days of the Trump Administration, many see Bannon’s hand. If it all feels like the disorienting Act One of a summer Hollywood war blockbuster, it should: Bannon’s the director of such alt-right films as Battle for America, and confusing your opponent in war is a signature tactic from one of Bannon’s two favorite books, The Art of War, by ancient Chinese general Sun Tzu. The other is the Bhagavad Gita, which uses the battlefield as an allegory for life. 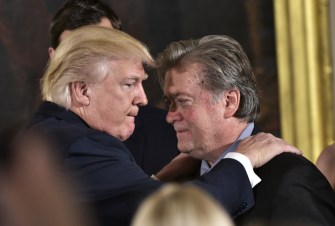 Bannon apparently sees much of life as a war. Whether that’s military opponents or political adversaries, he has a long history of a fascination with it. Former close friend and Hollywood writing partner Julia Jones told the Daily Beast that Bannon used to use “Sparta” as his computer password, thanks to his fascination with the victors of the Peloponneisan War. Jones continued, “Steve is a strong militarist, he’s in love with war — it’s almost poetry to him.” And Sun Tzu agrees. The very first precept in The Art of War is “The art of war is of vital importance to the state.”

While it’s safe to assume that The Art of War isn’t the only book on war strategy with which Bannon is familiar, it’s still interesting that its precepts seem to explain some of what we’ve seen so far from the Trump team. Here’s some of Sun Tzu’s guidance and how it fits into the Art of Trump.

“All warfare is based on deception.”

Whether it’s imaginary voter fraud, taking undeserved credit for jobs already created, or the fictional Bowling Green Massacre, the Trump administration clearly believes in made-up truth, and views reporting as “fake news” if it questions the veracity of the administration’s  “alternative facts.”. The Trump team seems utterly unfazed when anyone calls their fictions “lies” becuase they believe in them as a tactic.

“Pretend to be weak, that he may grow arrogant.”

Sun Tzu is a big fan of faking out one’s adversaries. In the transition period between the election and the inauguration, Trump’s team seems like the Gang Who Couldn’t Shoot Straight. Opponents took heart in the seeming disorganization, and made fun. But with the avalanche of action that occurred immediately after the inauguration, this may well have been a deliberate feint.

Is it any coincidence that the very first Democratic Party leadership emails released by Wikileaks were just the thing for exacerbating the rift between Clinton and Sanders supporters, a division that may have kept just enough of the latter away from the voting booth to hand Trump the win? (We may never know if it was Russia or Trump’s own people behind Wikileaks.)

“These military devices, leading to victory, must not be divulged beforehand.”

As a candidate, Trump on several occasions faulted U.S strategy against ISIS for openly announcing its intentions to meet them at a particular location. There can be little doubt that Trump’s team believes in the sneak attack after the Yemen raid in mid-January.

“There is no instance of a country having benefited from prolonged warfare.”

That the Trump administration hit the ground running with its early presidential orders should be no surprise. Sun Tzu warns against wearing out an army, and thus advocates attacking and winning quickly.

It may be that Bannon seems himself — and the president agrees — as America’s bulwark, the mighty heart of the government. A former Beitbart staffer told the Daily Beast, “Steve has an obsession with testosterone.” 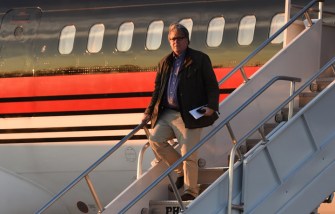 There are some other ways in which the White House seems to be violating Sun Tzu’s advice:

“Hence it is only the enlightened ruler and the wise general who will use the highest intelligence of the army for purposes of spying and thereby they achieve great results.”

This doesn’t mean, “Fire the expert military and intelligence offices and replace them with a political advisor.”

Sun Tzu also has some some guidance that may already be proving amazingly effective as it’s deployed against President Trump by his own opponents:

Related
Starts With A Bang
Ask Ethan: Do my atoms really “touch” each other?
When you bring two fingers together, you can feel them “touch” each other. But are your atoms really touching, and if so, how?
13.8
Why the origin of life and the Universe itself might be forever unknowable
There might be a hard limit to our knowledge of the Universe.
Hard Science
200 years of exploring Antarctica
What we’ve learning from the world’s coldest, most forbidding, and most peaceful continent.
Sponsored
4 misleading personal finance tips
Personal finance advice is often over-simplified and fails to consider economic research or people’s unique circumstances.
Strange Maps
Europe’s stunning digital divide, in one map
Some Europeans really don’t want to use the internet.
Up Next
Surprising Science
Do humans have a mating season? Turns out we do—sort of.
There’s still a controversy among scientists as to why humans seem to follow a certain pattern.