It’s no secret that the polarization in America has reached a fevered pitch. This is perhaps best identified by the recent clashes between members of the reactionary Alt-Right and the radical Antifa (Anti-Fascist) movements at several protests around the country, most notably in Portland, Ore.

The Left-Right chasm is even apparent among moderates. The deep wound in the body politic laid bare during the 2016 presidential election has been left to fester and grow deeper. Today, with the omnipresence of social media, our beliefs are constantly reinforced and hardly ever challenged, further entrenching divisions.

Things are coming to a head. But it’s a decade old trend whose roots begin in the 1980s. There are essentially two camps of scholars on the subject. The “maximalists” see each side getting more extreme in their views, while the “minimalists” still see the majority of the Americans as centrists. In the latter camp, people’s views haven’t changed. They just hate the opposition more. 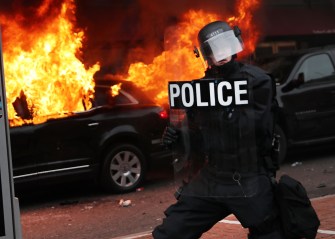 Political scientist Alexander George Theodoridis, an assistant professor at the University of California, Merced, is an expert on the hyper-polarized climate. He wrote in Scientific American, “My own research repeatedly shows that partisanship for many Americans today takes the form of a visceral, even subconscious, attachment to a party group.”

The consequences are that politicians are rewarded by their base for obstructionism, while punished for working with the other side. As a result, the last three Congresses were the least productive in history. According to Theodoridis, “The effects of this campaign and the hyper-polarization that produced it, are likely to linger into the foreseeable future.”

But there’s far more at stake than gridlock. Being preoccupied with contempt and distrust by the other side means elections results can become suspect, fraud may be ignored, and suddenly, with this new level of hatred, dirty tricks and even wholesale atrocities can be justified in the minds of some extremists.

Just look at the trajectory of hate crimes in the wake of the last election or the number of protests that have gotten out of hand, resulting in property damage or worse. So how can we ratchet down the level of tension? The answer I propose comes from a somewhat unlikely place.

David Foster Wallace is considered one of the best modern American writers. In 2005, he gave a commencement speech at Kenyon College which was so thought-provoking, it later became its own essay. Listening to it recently, I suddenly realized that within it are the healing concepts we need to mend the hyper-polarized climate.

Wallace starts his speech with a little parable, “There are these two young fish swimming along, and they happen to meet an older fish swimming the other way, who nods at them and says, ‘Morning, boys, how’s the water?’ And the two young fish swim on for a bit, and then eventually one of them looks over at the other and goes, ‘What the hell is water?’” Wallace says, “The point of the fish story is merely that the most important, obvious realities are often the ones that are the hardest to see and talk about.”

When someone identifies themselves in the other ideological camp, we automatically tense up or begin judging them. We also pull closer to our camp. It’s a visceral response. But if we can perform a meta-analysis of the situation, we’ll begin to realize that it’s not only their subjectivity but ours that comes into play.

Wallace goes on to explain that the value of a liberal arts education isn’t learning what to think, but in realizing our “choice of what to think about.” The main ideological branches have different ways of looking at the world and processing meaning through experience.

Wallace warns against “Blind certainty,” in our position, which he defines as, “A closed-mindedness that amounts to an imprisonment so total that the prisoner doesn’t even know he’s locked up.”  Instead, we should have some “critical awareness” about our certainties. 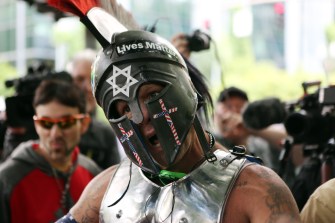 Becoming entrenched in our own subjectivity or “default setting” is exacerbating hyper-polarization. Getty Images.

Because he says, “A huge percentage of the stuff that I tend to be automatically certain of is, it turns out, totally wrong and deluded.” One example, “Everything in my own immediate experience supports my deep belief that I am the absolute center of the universe, the realest, most vivid and important person in existence.” This is what he calls our “default setting” which is “hardwired into us at birth.”

Of course, when we think we’re threatened, we tend to devolve into our ideological default setting, and to discredit our perceived opponent’s. Choosing what to think about means, “Do(ing) the work of somehow altering or getting free of my natural, hard-wired default-setting, which is to be deeply and literally self-centered, and to see and interpret everything through this lens of self.”

It isn’t easy, but, “People who can adjust their natural default-setting this way are often described as being ‘well adjusted,’ which I suggest to you is not an accidental term.” He adds, “Learning how to think is really exercising some control over how and what you think.” 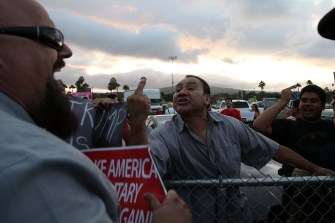 Recognizing our own subjectivity may be the hardest step in bridging the divide. Getty Images.

Perhaps it’s the fact that Americans are working longer than they have in decades or that salaries don’t go as far as in the past. It may be that they have little savings and are drowning in debt, or just the fact that they’re sleeping less. Perhaps it’s all of these reasons put together that people today are more likely to fall into their default setting, which increases hyper-polarization.

Wallace explains that there are whole segments of adult life that are full of tedium and frustration, which is where choosing becomes really important. Waiting in line at the grocery store or sitting in traffic are two examples.

In one example he says:

Most days, if you’re aware enough to give yourself a choice, you can choose to look differently at this fat, dead-eyed, over-made lady who just screamed at her little child in the checkout line — maybe she’s not usually like this; maybe she’s been up three straight nights holding the hand of her husband who’s dying of bone cancer, or maybe this very lady is the low-wage clerk at the Motor Vehicles Dept. who just yesterday helped your spouse resolve a nightmarish red-tape problem through some small act of bureaucratic kindness…If you’re automatically sure that you know what reality is and who and what is really important — if you want to operate on your default-setting — then you, like me, will not consider possibilities that aren’t pointless and annoying. But if you’ve really learned how to think, how to pay attention, then you will know you have other options.

Wallace does caution, “It is unimaginably hard to do this, to stay conscious and alive, day in and day out.” Any student of U.S. history knows that since the first Continental Congress and perhaps before, compromise is what preserved the American experiment. Not only did it allow the Republic to move forward, deal-making led the U.S. down a more moderate path, and blunted extremist views. We may have dipped once again into hyper-polarization.

Now, Wallace’s prescient words give us the means to begin healing the rift, if only we’re all bold and committed enough to step out of our default setting, use our faculties to learn about and empathize with one another, and find some way to move things along.

You might think it’s impossible to run out of wind, but Europe’s “wind drought” proves otherwise. And it’s only going to get worse.
Up Next
Strange Maps

India to Iceland in a Mere Millennium: How Chess Went Global

Fancy a game of Japanese chess?