One of the things that Bill Nye does best is to make passionate arguments in a quiet, rather unassuming way.

While he gets a tiny bit heated a few minutes into this clip, he turns that back around and comes to us from a much more level-headed post of view by the end.

I know that many abortion debates turn into heat, and vitriol, and daggers from the eyes, but this is one that should at least get people talking.

His point is solid: if you’re going to consider a fertilized egg as a human being, then, as happens to the vast majority of fertilized eggs, who will you imprison or sue when it doesn’t attach to the womb? It’s dangerous territory. 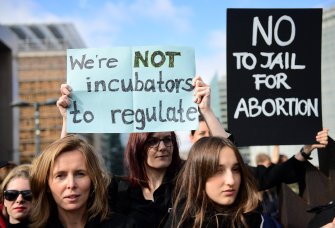 And speaking of laws based on ignorance, despite the Supreme Court ruling on Roe V. Wade in 1973, 11 states have passed legislation basically making abortion illegal or at least nearly impossible to access (and, in one state, making facilities and possibly the women who had the services pay for fetal burial. I’m not kidding).

In addition to the final month of the presidential election, I suspect this conversation will be had many, many times for the foreseeable future. Meanwhile, I’m with Bill — facts and science, please.

Watch the video here (or read the transcript below).

Bill Nye: Many, many, many, many more hundreds of eggs are fertilized than become humans. Eggs get fertilized, and by that I mean sperm get accepted by ova a lot. But that’s not all you need. You have to attach to the uterine wall, the inside of a womb, a woman’s womb. But if you’re going to hold that as a standard, that is to say if you’re going to say when an egg is fertilized it’s therefore has the same rights as an individual, then whom are you going to sue? Whom are you going to imprison? Every woman who’s had a fertilized egg pass through her? Every guy who’s sperm has fertilized an egg and then it didn’t become a human? Have all these people failed you? It’s just a reflection of a deep scientific lack of understanding and you literally or apparently literally don’t know what you’re talking about. And so when it comes to women’s rights with respect to their reproduction, I think you should leave it to women. This is really — you cannot help but notice. I’m not the first guy to observe this: You have a lot of men of European descent passing these extraordinary laws based on ignorance. Sorry you guys. I know it was written or your interpretation of a book written 5,000 years ago, 50 centuries ago, makes you think that when a man and a woman have sexual intercourse they always have a baby. That’s wrong and so to pass laws based on that belief is inconsistent with nature. I mean it’s hard not to get frustrated with this everybody. And I know nobody likes abortion, okay. But you can’t tell somebody what to do. I mean she has rights over this, especially if she doesn’t like the guy that got her pregnant. She doesn’t want anything to do with your genes; get over it, especially if she were raped and all this. So it’s very frustrating on the outside, on the other side. We have so many more important things to be dealing with. We have so many more problems to squander resources on this argument based on bad science, on just lack of understanding.

It’s very frustrating. You wouldn’t know how big a human egg was if it weren’t for microscopes, if it weren’t for scientists, medical researchers looking diligently. You wouldn’t know the process. You wouldn’t have that shot, the famous shot or shots where the sperm are bumping up against the egg. You wouldn’t have that without science. So then to claim that you know the next step when you obviously don’t is trouble. Let me do that again. Let me just pull back. At some point we have to respect the facts. Recommending or insisting on abstinence has been completely ineffective. Just being objective here. Closing abortion clinics. Closing, not giving women access to birth control has not been an effective way to lead to healthier societies. I mean I think we all know that. And I understand that you have deeply held beliefs and it really is ultimately out of respect for people, in this case your perception of unborn people. I understand that. But I really encourage you to look at the facts. And I know people are now critical of the expression fact-based but what’s wrong with that? So I just really encourage you to not tell women what to do and not pursue these laws that really are in nobody’s best interest. Just really be objective about this. We have other problems to solve everybody. Come on. Come on. Let’s work together.

Cancerphobia and Radiophobia Are Harming the Children of Fukushima

Radiophobia had the Fukushima region by the throat, so it was decided that all 360,000 or so children and teens would be offered screening for thyroid irregularities.