The fish tacos at Surfside, a 24-hour Mexican restaurant in Washington D.C., sell for $12.50. But don’t plan on trading a ten and some change for the meal: the restaurant is one of many in the city that no longer accepts cash.

It’s a growing trend in an era defined by mobile payments, online retail, and Bitcoin. The supporters say going cashless speeds up transactions and protects businesses from theft. But others say it discriminates against the many Americans who don’t have reliable access to a credit or debit card.

Now, a new bill called the Cashless Retailers Prohibition Act of 2018 seeks to make it illegal for restaurants and retailers not to accept cash or to charge different prices to customers depending on the type of payment.

“Banning the use of cash is a discriminatory practice that disproportionately impacts the 10% of DC residents who are unbanked, and an additional 25% of residents who are underbanked and may not have access to a credit card,” wrote Councilmember David Grosso.

“In addition, this practice is discriminatory against youth, who are often unable to obtain a credit card, impacting many of our middle school and high school students.

By denying patrons the ability to use cash as a form of payment, businesses are effectively telling lower-income and young patrons that they are not welcome.” 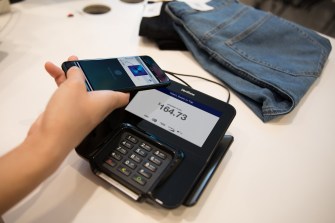 Still, the mandate could prove to be a headache for some businesses, like D.C.-based juice company JRINK.

“When we had one location in Dupont it was easier to deposit cash, which was right across the street at Eagle Bank,” JRINK CEO Shizu Okusa told the Washington City Paper. “But then the company grew… At some of our locations, including one in Clarendon, it’s really hard for businesses to keep track of all of the cash that’s laying around. If you think about providing more access to your products in multiple locations, we want to balance with operational feasibility.”

Okusa said the company would have to update its business model if the bill passes.

“We’d have to have new protocols, new equipment, and new staff training.”

Many cashless stores in D.C. cater to a wealthy clientele. But for other businesses around the country, going cashless is a safety precaution. Chicago-based chain Epic Burger, for instance, decided to experiment with a cashless model at one of its stores after being hit by six break-ins, burglaries and robberies over eight years.

“It has generated the most negative pushback of anything we’ve ever done,” found David Friedman told USA Today, adding that he’s now implemented a cashless policy at all of his stores. “I made the decision to put my customers’ and my employees’ safety as my No. 1 priority.”

According to police data, there were 165 burglaries and robberies in D.C. restaurants in 2016. One D.C. resident summed up the bill, which has yet to be voted on, like this:

“I can see both sides…Businesses should be able to choose what they want to do with their business and what sort of money they want to transact with. But at the same time, cash is still currency. So to say that is not a valued way to pay for something would be kind of frustrating.”

Subscribe for counterintuitive, surprising, and impactful stories delivered to your inbox every Thursday
Related
The Future

Actor and science communicator Alan Alda shares his three rules of three for effective and empathic communication.
Up Next
Mind & Brain

A growing body of research suggests that healthy sleep habits might be effective in preventing the onset of Alzheimer’s disease.