In light of the horrific shooting at the Marjory Stoneman Douglas High School in Parkland, Florida, President Trump has made mental health a major part of his remarks on the issue.

Some have attributed Trump’s newfound interest in mental health to a cynical deflecting tactic, meant to focus attention away from discussing gun control. Regardless of Trump’s real reasons, the fact remains – mental health has to be a part of any meaningful conversation about guns in America.

While Trump has talked of focusing on mental health to curb mass shootings, one of his first acts as a President was to sign a congressional repeal of a rule instituted under President Obama that restricted gun ownership for Social Security beneficiaries with psychiatric disabilities, who used a “representative payee” to deal with their finances. This payee could be a friend, a family member or a financial manager. The law was enacted after the shooting at Sandy Hook Elementary School where 20 children and six teachers were gunned down by a mentally ill shooter in 2012. The assumption behind the regulation was that if some people were too mentally ill to handle their disability payments, then they shouldn’t be eligible to buy guns.

Going against even this relatively modest rule that would have affected 75,000 people, Trump continues to link mental health issues with the shooting that happened. He recently tweeted that more reporting is necessary: 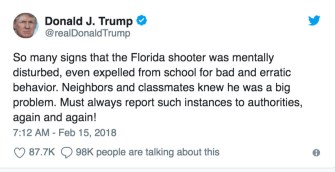 It was, ironically, a requirement to do more reporting that Trump got rid of by the repeal. The struck rule required the Social Security Administration to send names of people who received disability benefits through a “representative payee” and have mental impairments to the National Instant Criminal Background Check System (NICS). That’s the government’s database of people who are banned from buying guns.

Some have argued that this regulation, also fought by the NRA, would not have stopped the Parkland shooter and just placed restrictions on the right of the disabled without allowing for due process. Disability advocates criticized the rule for using the existence of a representative payee as a sign of potential violence by the person, saying that there is a range of mental issues and that limiting some rights of a disabled person leads down a slippery slope.

Trump did not repeal the Obama-era rule out of deference to such opinions but more likely in an effort to nix the majority of the regulations set up by his predecessor and to protect second amendments rights. How committed is his administration really to mental health issues? White House’s 2019 budget does include some additional money for mental health services, but it slashes more than it contributes.

An extra $468 million are now going to the Department of Veteran Affairs for mental health services (a 5.8% increase over 2018’s budget) with a special focus on suicide prevention. An additional $1 million from the budget is going to the Children’s Mental Health Services program (whose budget in 2018 was $119 million).

But Trump’s budget also significantly cuts spending for the Substance Abuse and Mental Health Administration by $665 million. The National Institute of Mental Health also fares badly, getting a 30 percent reduction in funding, with its budget squeezed by $500 million,going from $1.6 billion in 2017 to $1.1 billion in 2019.

But does that matter? Is there truly a link between mental health and guns violence? A 2015 analysis of 235 mass shootings found that 22% of the shooters were considered mentally ill. As reported by the New York Times, mass shootings by people with serious mental illnesses account for 1% of all gun homicides per year, according to a book published by the American Psychiatric Association in 2016. 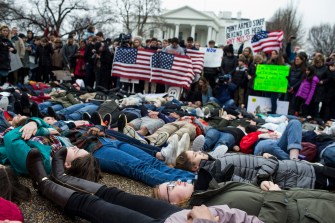 Demonstrators lie on the ground a ‘lie-in’ demonstration supporting gun control reform near the White House on February 19, 2018 in Washington, DC. (Photo by Zach Gibson/Getty Images)

The professor’s thoughts on how easy guns make it commit suicide apply equally to mass shootings:

“The evidence is overwhelming,” Miller says. “People in Montana are not more suicidal than people in Massachusetts, they don’t have a higher risk of depression or other types of mental illness. But what they have is a weapon that they can reach for in a moment of vulnerability from which there is no backing out and from which you don’t get second chances.”

When you look at the country as a whole, you can see that the U.S. spends as much on mental care as other nations, and has similar numbers of mental health professionals per capita as well as the rate of severe mental disorders on par with other wealthy nations, says the NY Times.

Currently, federal law prohibits selling guns to a person who “has been adjudicated as a mental defective or has been committed to any mental institution.” That law covers a fairly small group of people and with the inconsistent reporting practices of many states, is not working well enough.

Experts agree that such measures as not selling guns to people with mental illnesses, which also have an 88% public support, could certainly curb mass shootings. But measures, like banning assault rifles and expanding background checks, are much more likely to prove effective. Just think – Americans constitute about 4.4% of the world’s population, but own 42% of its guns. And a 2015 study found that 31% of the gunmen in mass shootings globally are American. Maybe all else being equal, the main problem is not mental health. It’s the astronomical numbers of guns in the country, combining with lax laws to create a recipe for frequent disasters, some of which involve people with mental illness and some do not.

Related
The Learning Curve
Why do high IQ people stagnate in their careers? Emotional intelligence
Research suggests that emotional intelligence is more vital for success than IQ.
The Present
Even in the age of AI, some problems are just too difficult for computers
Computers are growing more powerful and more capable, but everything has limits
The Future
How the metaverse will revolutionize K-12 and higher education
Imagine going on a tour through the human circulatory system as a tiny cell. That is just one example of education in the metaverse.
Starts With A Bang
Ask Ethan: What are white holes, and do they really exist?
In General Relativity, white holes are just as mathematically plausible as black holes. Black holes are real; what about white holes?
Life
Strange life forms create an “alien” ecosystem in an abandoned uranium mine
Slimy biofilms made up of bacterial and eukaryotic life forms have taken over an abandoned, flooded uranium mine in Germany.
Up Next
Surprising Science
Weight loss is about diet quality not calorie counting, finds major clinical trial
A major clinical trial finds that diet quality beats calorie counting for the best weight loss strategy.