The annual meeting organized by the World Economic Forum in Davos, Switzerland, brings together top business and political leaders from around the world, as well as economists and celebrities to discuss the world’s problems. The meeting, which took place this year from 23rd to 26th of January, is also famous for its panels, where experts zero in on hot-button issues.

At one panel alarmingly-named “What Could Trigger a Major Security Crisis in 2018?”, Oliver Cann, the head of media content for the World Economic Forum, pointed out that on one hand we have now a “humming global economy,” with the IMF projecting an increased growth. And the other hand, he also sensed “trouble is lurking” in the financial sector and foresaw other “systemic” challenges like climate change.

Lee Geun, panelist and professor of international relations at South Korea’s Seoul National University, focused on North Korea, which declared in 2017 that it completed its nuclear program. On one hand, this may bring balance and stability to the Korean peninsula. However, “miscommunication,” “miscalculation” and “misreception” could very well cause the next global security challenge.

Geun feared that the leaders of the U.S. and North Korea may decipher signals wrongly, especially considering the “dangerous” taunting from Donald Trump, calling Kim Jong Un “rocket man” and so forth. Direct dialogue between leaders in Northeast Asia can help avoid escalation, according to Professor Geun. This dialogue can also be quite volatile since all the players have different goals. The U.S., Japan, China, South Korea and North Korea need to come up with very clear visions of what the endgame looks like in order to measure success, said Geun. What’s also necessary is a roadmap and a timetable to come up with a solution acceptable to all sides.

Geun saw a danger that the current conflict may result in the installation of a missile defense system on the Korean peninsula by the U.S. – an action which would result in a similar move by China, spurring an arms race and rising tensions.

Moisés Naím, Distinguished Fellow at the Carnegie Endowment for International Peace, thought a global conflict may come from the clash between the powerful and those trying to disrupt power. He forecast a “cyber 9/11” by pointing to the increased amount of cyber threats. We saw some attacks already, like North Korea’s attack on Sony, but a much bigger cyber attack is “in the cards,” said Naím.

Focusing to the threats posed now by drones, cyber attacks, and “suicidal terrorists,” Naim proposed that the power to conduct war shifted from government militaries to private organizations and individuals. Louise Richardson, Vice-Chancellor of the University of Oxford, argued that a high-tech, major state conflict is less likely than half-a-dozen small-scale attacks on civilian centers like sporting complexes or shopping centers. This could lead to public mistrust of the leaders of the attacked nation, making them look weak and unable to protect its citizens. The “aroused population demanding a reaction” could lead to a conflict with the country where the terrorists are from.

Terrorism is designed to provoke an over-reaction, explained Richardson. A country is likely to overact against the state somewhat responsible for this attack, prompting a cycle of escalation. Some of the inexperienced national leaders in the world today and the “degraded” diplomatic structures make such a scenario especially more feasible.

Social dislocation caused by mass migration may cause destabilization that could lead to conflict, according to Richardson.

Naím (who is from Venezuela) also called Venezuela ripe for a crisis, the likes of which “we have never seen in the Western hemisphere,” with its economy headed for devastation and country-wide starvation.

Naím also pointedly quipped that “one of the perplexities and difficulties of our time is how there is consensus on what to do and an inability to do it”. He thought this applies to a number of situations like climate change, the refugee crisis, and containing war. The demand for such action mounts but the capacity of the world institutions for collective action is either “stagnant or declining,” creating a deficit of action and a glut of victims.

Professor Geun remarked that one present danger is that people don’t pay attention to experts, which leads to fewer solutions and a general lack of cooperation. 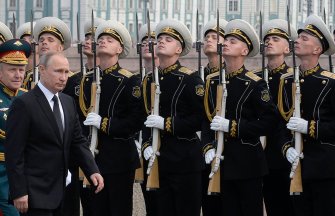 On the question of NATO, Naim claimed the treaty organization designed to contain the Soviet Union had a renewed purpose, given Russian President Vladimir Putin’s aggressive annexation of Crimea. Would NATO come through if Putin tried to take the Baltic republics? Naim said that’s “the hope,” but only time could tell if NATO would coalesce around such a situation. According to Naim, that’s not a 100% guarantee.

Following up on the future of terrorism in 2018, Richardson called terrorism an effective tactic—and you can’t wage war on a tactic. In fact, she thought the “whole concept of a war on terror is a mistaken one”. What makes people turn to terrorism should be our focus instead. We can help them realize that terror cannot create the lasting political change they may seek.

People and governments have a “staggeringly low” willingness to learn from the mistakes of others, said Richardson, calling that a big problem standing in the way of continual peace.

In some good news, the experts generally conceded that there should be no war between major powers in 2018.

Check out the full video of the panel here.

“The digital HQ – the digital infrastructure that supports productivity and collaboration – actually became more important than the physical HQ.”
Up Next
Politics & Current Affairs

What the U.S.-Mexico border wall would look like in Europe

The size of the U.S.-Mexico border wall proposed by the Trump administration seems shockingly ambitious when overlaid onto a map of Europe.