Banksy’s dystopian theme park hasn’t even been open a week, and already the critics have been out in force, pulling no punches, but missing the point in the process. Business Insider described it as “art about nothing.” According to the Evening Standard’s description, “it’s mostly selfie-friendly stuff” — which is only true if your idea of a good selfie is of yourself next to a graphic representation of human suffering. In fact, I barely found a single exhibit in the entire site that I felt realistically suitable to take a lighthearted selfie next to without immediately feeling like a despicable human being. Even The Guardian chimed in: “In reality the crazy fairgrounds and dance tents at rock festivals are far more subversive.” The case against Dismaland was even made right here at Big Think where “outrage culture” received a slating.

None of this was in tune with the impression I walked away with, after exiting through the gift shop. A single overwhelming theme rang on in my mind on the ride home, and on into the night as I lay in bed, eyes shut, but wide awake, considering the imagery fused in my mind. Dismaland is a wasteland, a graphic and abrupt visual depiction of what we are already doing to our planet, and what might happen if we don’t collectively change our behaviour. You might think that there are better ways to go about this than shock and awe. I did once; after reviewing the research I’m no longer so sure.

Changing attitudes is a wicked problem that is not synonymous with correcting ignorance. Providing parents with information debunking vaccine myths can make them less likely to vaccinate their children. And 97 percent of scientists agree on the truth of global warming and this is “old news,” yet the size of the general population that refuses to believe in global warming is massive and pervades the political right.

A comfortable life and an insular social group with strong shared beliefs is a tough match for cold, hard evidence. Facts just aren’t as seductive as a gas-guzzling 4×4, year-round air conditioning, and not having to worry about constraining your consumption and recycling your detritus.

The Guardian critique misses the point spectacularly, complaining about “a painting of a mother and child about to be overwhelmed by a tsunami.” According to The Guardian’s dismal analysis, “we are — apparently — meant to think it’s funny that the wave is about to kill these beachgoers.” Their quote, not mine. No, of course you’re not supposed to find it funny. You’re supposed to finally recognise that if we don’t respect this planet that we all share, our world will rapidly become unlivable for our children.

Despite warning after warning from scientists, we continue to ignore the threat of climate change and the damage we are otherwise doing to our planet. The UK, where the Dismaland exhibit is located, has been particularly regressive over the past year. Since the recent election, the British government has scrapped over half a dozen green policies. It is clear that evidence alone isn’t working to convince people; perhaps immersive evidence-inspired art will encourage minds to change, where evidence alone has failed.

Dismaland does not neglect facts; look hard enough, such as on a bus where the ominous destination is simply “Cruel” and you will find damning real-life quotes, graphs, diagrams, timelines, statistics, and artefacts, which you can consider as you wander on past the more metaphorical exhibits. You can even visit a library where you flick through the books that no doubt provided Banksy’s inspiration.

The major criticism of the attraction has been that it breeds apathy and disengagement. On the contrary, I haven’t walked away from Dismaland feeling helpless and despondent. I’ve been left with a visceral rejection of apathy, the realisation that Dismaland isn’t a world I want to live in and that I need to do what I can to avoid this vision of the future. Look a little closer at the image below. In a stroke of what can only be described as artistic genius, Banksy has made every single employee of Dismaland a part of the art — no, the art itself. You don’t want to be like one of these poor apathetic souls. 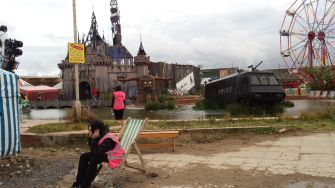 Even if the exhibition convinces just a few people to respect their planet and take a critical eye to the world around them, it will be worth its weight in gold. But perhaps Dismaland has the power to do more than that. Perhaps it will inspire people to alter their goals in life to actually change the world around them.

In a world where our top science graduates are regularly creamed off from our top universities to play the roulette wheel of high finance, the battle for hearts and minds to take ethical career paths lies with the next generation, who are certainly not left out at Dismaland. Kids can play crazy golf on a course of discarded oil drums and negotiate with pocket money loan sharks. 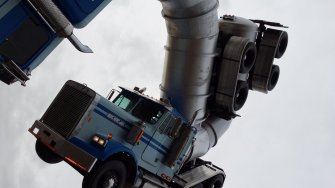 As for Business Insider‘s argument that the show is simply “bad,” where else can you experience the illusion of zero gravity in a revolving caravan, before wandering beneath a giant oil tanker contorted high into the sky? 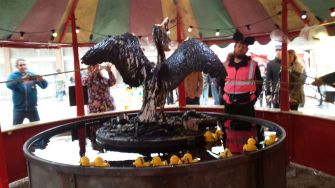 Often in life, it is experiences rather than words on a page or images on a screen that make us change our minds. I for one, hope this experience has an impact. Sometimes we humans need to reach rock bottom before we change our ways. Dismaland is rock bottom.

Non-Western thought is vast and ancient, so why don’t some consider it philosophy?
Hard Science

More and more business leaders are starting to lean on learning and development for support in facing essential challenges.
Up Next
Culture & Religion

Your Sleep Disorder Is Like a Dangerous Eating Disorder

As far as health risks go, sleep disorders tend to fly beneath the radar. Researchers are trying to change that.