The purpose of placing federal air marshals on commercial airlines in the U.S. was once to protect flights considered to be at higher risk of attack. But a new report from the Boston Globe shows how a shadowy Transportation Security Administration program, dubbed ‘Quiet Skies’, orders undercover federal marshals to track and collect data on civilian targets who “are not under investigation by any agency and are not in the Terrorist Screening Data Base,” according to an internal TSA bulletin posted in March.

A few dozen people aboard domestic flights are surveilled by undercover federal air marshals (FAMs) every day, according to the report. The air marshals collect basic information on civilian passengers, like hairstyle and whether the person has a tattoo or piercing. But a TSA checklist obtained by the Globe shows how the marshals also collect surprisingly detailed observations on passengers, such as whether they display an “Adam’s apple jump,” use the bathroom, touch their face, appear to be “white knuckling” their bags, or display a “cold penetrating stare.”

The Globe reports that a full list of criteria for Quiet Skies was unavailable, and that the TSA initially wouldn’t confirm the program even exists. 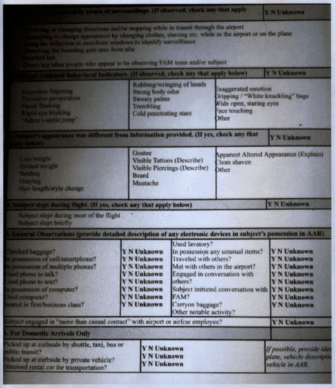 But internal correspondence among various TSA officials, as well as comments obtained by the Globe from anonymous air marshals, suggest the program continues to operate and that it’s proven controversial within the agency, which allocates about 10 percent—or $1 billion—of its annual budget toward air marshal operations.

“What we are doing [in Quiet Skies] is troubling and raising some serious questions as to the validity and legality of what we are doing and how we are doing it,” one air marshal wrote in a text message to colleagues, the Globe reports.

It’s unclear how civilians end up on the Quiet Skies surveillance list, but the report suggests your past travel history and contacts can play a part. Civilian targets whom air marshals have reportedly tracked include “a businesswoman who happened to have traveled through a Mideast hot spot, in one case; a Southwest Airlines flight attendant, in another; a fellow federal law enforcement officer, in a third,” Jana Winter wrote in the Boston Globe article.

One air marshal seemed frustrated after being assigned to track a Southwest Flight attendant.

“Cannot make this up,” the air marshal wrote in a message.

A colleague replied: “jeez we need to have an easy way to document this nonsense. Congress needs to know that it’s gone from bad to worse.”

The TSA wrote in a statement to CBS News that the primary goal of Quiet Skies is to “ensure passengers and flight crew are protected during air travel,” adding that it doesn’t select surveillance targets based on race or religion. The statement continued to say Quiet Skies isn’t intended to surveil “ordinary Americans with routine reviews” and that it’s “a practical method of keeping another act of terrorism from occurring at 30,000 feet.”

“The American public would be better served if these [air marshals] were instead assigned to airport screening and check in areas so that active shooter events can be swiftly ended, and violations of federal crimes can be properly and consistently addressed,” John Casaretti, president of the Air Marshal Association, said in a statement.

The most beautiful letter Richard Feynman ever wrote

Richard Feynman wrote a lot of things. Here, you can read his most touching letter.