Starbucks closed more than 8,000 of its stores Tuesday afternoon so an estimated 175,000 employees could undergo racial bias training.

The move is a response to a widely publicized incident in April in which a Starbucks manager in Philadelphia called police after two black men sat in the store and tried to use a bathroom without having purchased anything. Today’s training could cost the company $12 million in lost profits, according to some estimates.

“We want our stores to be the third place [between home and work], a warm and welcoming environment where customers can gather and connect,” the company wrote in a statement. “Any customer is welcome to use Starbucks spaces, including our restrooms, cafes and patios, regardless of whether they make a purchase.”

It’s unclear how the policy changes will play out, particularly between Starbucks and the homeless. In 2016, some stores in Los Angeles closed their bathrooms entirely, even to paying customers, in response to large numbers of homeless people using company facilities. 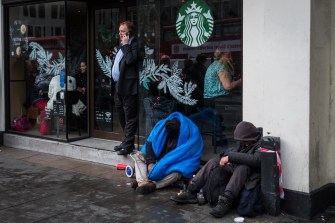 It’s unclear exactly what the company’s several-hour racial bias training session entails because media weren’t allowed to spectate. An open letter published on the company website says the training will include “sharing life experiences, hearing from others, listening to experts, reflecting on the realities of bias in our society and talking about how all of us create public spaces where everyone feels like they belong—because they do. This conversation will continue at our company and become part of how we train all of our partners.”

“Trainers tell us that people often respond to compulsory courses with anger and resistance—and many participants actually report more animosity ﻿toward other groups afterward.”

Still, some racial bias training does seem to work, particularly approaches that frame biases as bad habits that can be overcome with practice. However, whether Starbucks employees, or anyone for that matter, can break those habits over an afternoon is an open question, though Starbucks notes that the “conversation will continue at our company and become part of how we train all of our partners.”

“Discussing racism and discrimination is not easy, and various people have helped us create a learning experience that we hope will be educational, participatory and make us a better company,” the company’s open letter reads. “We want this to be an open and honest conversation starting with our partners. We will also make the curriculum available to the public.”

Subscribe for counterintuitive, surprising, and impactful stories delivered to your inbox every Thursday
Related
The Future

When battles raged in ancient cities, their rocks blazed so brightly that they could be reoriented according to Earth’s magnetic field.
Up Next
Politics & Current Affairs

Support for increased gun control in the U.S. is slowly rising, but one group of Americans seems to change their minds faster than others.