THE PROBLEM: ISIS is winning the war on social media.

The rise of the group commonly known as Islamic State (ISIS) is indicative of many things, although perhaps none more notable than the broad appeal of a social media-savvy Islamist enterprise.

As we learned a few months ago from Big Think expert Stanley McChrystal, ISIS thrives for two main reasons. First, the region in which it has grown is highly fractured. Not unlike a weak immune system, the Syria-Iraq region is not strong enough to expel the ISIS virus (USA: “Whoops, our bad.”).

Second, to extend the virus metaphor, the ISIS braintrust has mastered the art of spreading their ideas at pandemic-speed via social media. Where groups like Al-Qaeda prefer to operate in the shadows, ISIS is about as subtle as an atom bomb. Social media is the next evolution of terrorist recruitment, after all, and ISIS is having plenty of success recruiting Westerners to join their caliphate. 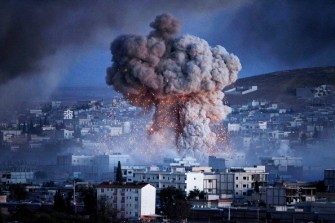 THE SOLUTION: Fight fire with fire, fight memes with memes.

Allow me to point you to a piece over at Gizmodo. It focuses on a report by Kalev H. Leetaru, senior fellow at the George Washington University Center for Cyber and Homeland Security and a council member of the World Economic Forum Global Agenda Council on the Future of Government.

Let’s just say there’s probably not a lot of blank space on this dude’s business cards.

Leetaru recently wrote an article in Foreign Policysuggesting, as Gizmodo puts it, “how we could run a great psychological ops campaign against ISIS.” The premise is simple: To censor ISIS on Twitter would be futile. Instead, we should drown them out.

How? By taking a page out of China’s strategy book and recruiting an army of Internet trolls, of course. The war against ISIS will be a war waged with memes. Here’s Leetaru:

“Instead, the United States could flood the online environment with an overwhelming volume of counter-narratives that simply drown out all other voices. The Chinese propaganda machine, for instance, employs over 300,000 people, including over a quarter-million online commentators, whose job is to saturate the web with Beijing-friendly material, while encouraging self-censorship through high-volume character attacks against users posting objectionable material.” 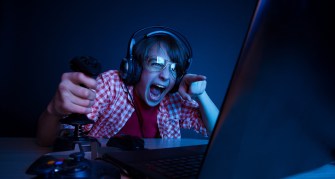 Why is this kid so happy? He just diluted Islamist narratives on Instagram, obviously. (Stock photo © Lipik1)

Instead of trying to block access to ISIS’ main channels of communication between itself and potential recruits, Leetaru wants the U.S. to hop right in and dilute ISIS’ message:

When the real Islamic State user finally registers a new account, the U.S.-registered accounts would go on the offensive, tweeting claims that the real account is a phony designed to ensnare sympathizers. Other accounts would be set up to look like official Islamic State recruiter accounts, posting genuine Islamic State material. But the ‘recruiters’ operating those accounts would, in reality, be government agents lurking in encrypted chat rooms, sending links that redirect the user’s browser to location-tracing malware.” 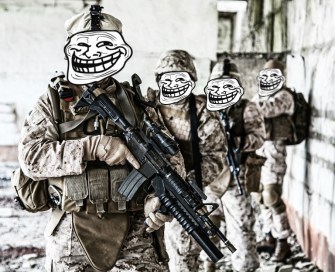 And that’s only one front of Leetaru’s social media cyberwar. Separate prongs would exist to upload “hundreds of thousands” of fake ISIS videos to YouTube. Any social media service through which ISIS operates would play host to an additional theater. Jihadi hashtags would be hijacked. Wild flurries of false information would overwhelm. The space between social media legitimacy and illusion would blur.

And since ISIS tends to reach out to potential recruits rather than the other way around, it’s not like they could just find some other service to use. They’re taking advantage of the fact that their targets are all in one place at one time. Disrupting this could prove successful in stifling their recruitment efforts.

Annalee Newitz, who authored the Gizmodo piece linked above, thinks Leetaru’s scenario is about 50 percent brilliant and 50 percent nuts. She notes that the weaponization of social media abuse could open up a bottomless rabbit hole of propaganda madness. Presidential campaigns. Unscrupulous brand execs. Various special interests. Given enough manpower, anyone could potentially launch a massive troll campaign of misinformation and/or malice.

That is, they could do all that if Leetaru’s idea proved to be successful, which it might not, because it might be crazy.

So what are your thoughts, Big Thinkers? Could the amassment of an Internet troll army help muzzle the infectious voice of Islamic State? Would this sort of social media sabotage be an effective mode of cyberconflict? Are we looking at the future of war?

Being mortal makes life so much sweeter.
Up Next
Surprising Science

Most reporting about risk hypes the danger but doesn’t provide all the information the reader needs to put the actual threat in perspective. So when balanced risk reporting shows up, it should be praised.