Yesterday while texting with my old friend Axel, who produces Podcast Winterfell, he asked me for predictions. I responded, “Someone’s got to die. Probably Littlefinger.” He replied that Baelish was already dead and Arya was playing the face game because, he went on, “This time of the year is the best time to make crazy outlandish predictions that will never come true.” The Wire‘s Tommy Carcetti may have succeeded in Maryland, but Westeros is not for him.

We were all waiting to see how outlandish the final episode of season seven would be, and truth be told nothing surprised. The closest moment was Cersei returning to pledge her allegiance to fighting the dead, which caused my wife to walk out of the room in disgust. The director nailed it: cheesy, over-sentimental music, Cersei’s faux-sad face, believing her for a moment. It was only minutes before the real Cersei returned.

Really, season seven is an epic set-up for the final showdown. True, a few moments felt rushed and forced. I kept reminding myself of the show’s original inspiration, those classic mythologies that were penned millennia ago. In the Indian and Greek tales certain moments last for books while others are merely mentioned in passing. The balance between brevity and poetry has never been easy, and the writers behind Game of Thrones certainly took liberties for expediency’s sake.

Last week I wrote about why this show means so much to us, why stories mean so much. Now that season seven has concluded we can dive deeper: why symbols are so meaningful, because even the symbolic nature of this final episode could not have been better timed. 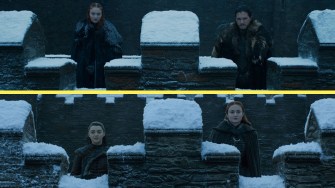 Symbolism is as important to the characters as it is to the show runners. The season 6 finale and season 7 finale had this scene in common.

In Behave, his tour-de-force of the neurobiology of human behavior, Robert Sapolsky writes:

As propagandists and ideologues have long known, if you want to get someone to feel that an Other hardly counts as human, there’s only one way to do it—engage the insula. And the surest way to do that is with metaphor.

The insula is the part of our brain that registers disgust (among other properties, as all brain regions play multiple roles). Sniff spoiled meat, the insula lights up. Contemplate dirty immigrants, the insula lights up. It has long been speculated that the psychological defense mechanism we have for avoiding danger by impure substances, like rotten food and foreign tribes, is what allows us to decry immigrants—really, any Others—even without knowing what we’re talking about. It’s why stereotypes flourish, why we can hate so easily.

Enter Cersei. When warned that the dead were coming for King’s Landing’s million souls, Cersei responds, “I imagine for most of them it would be an improvement.” Later she reveals her plans to brother-lover Jaime by proclaiming, “Let the monsters kill each other.” People, even loyal servants, are not people to her. They are merely means to her ends, unlimited and total power. Her insula is working overtime. 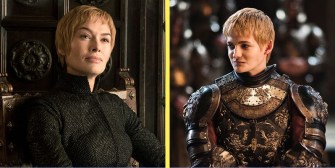 More symbolism in the air: Cersei Lannister has been sporting ‘The Joffrey’ for the last two seasons.

Though professing his liberalism, Sapolsky is no bleeding heart. He recognizes there are no lasting kumbaya moments in life. But what we do have is symbols, and symbolic gestures have real consequences. How leaders respond to tragedies and confrontation affects entire nations. Sometimes it goes well, and other times, well…

At the most basic level, words are symbols. Collections of letters, based on sequences of sounds, symbolically represent something else. The word “chair” is not a chair, but that thing you’re sitting on is. The word “disgust” is intangible, symbolic of an internal sensation. In both cases we can relate across space and time through symbols. We navigate our territory by communicating such symbols to one another and to ourselves all the time. Consciousness is impossible without such representations.

Sapolsky writes about important big-picture exchanges that have led to (at least partial) peace between nations and tribes. Jordan’s King Hussein eulogizing Israeli Prime Minister Yitzhak Rabin after he was assassinated by a right-wing extremist. IRA leader Martin McGuinness shaking hands with Unionist figure Peter Robinson after the latter was scandalized by his wife in Ireland. Nelson Mandela speaking Afrikaans to apartheid leader Constant Vilojen, who later returned the favor by giving a speech in Xhosa.

In none of these cases did one man particularly like the other. They were at odds, politically, socially, morally, and spiritually. But they put aside differences (and disgust) for a greater good, engaging in symbolic rituals that expressed meaning to their constituencies—Daenerys riding northward on the same ship with Jon Snow, for example.

While their cruiseship romp was not quite as genetically creepy as the Lannister kids’ longtime affair, it is at least politically genuine, unlike Cersei’s bait and switch. Cersei does offer symbolic aid, hollow through and through, inevitably weighing about the amount of, say, a tweet, which brings us to the timeliness of this particular story.

Cersei is ultimately unmoved by the White Walkers thanks to her deep pockets. The Iron Bank is funding her exploitations, which has led to the hiring of the Golden Company of Essos, so named because “Our word is as good as gold.” Pay them properly and they’ll fight the living, the dead, whomever, hauling along destructive elephants in tow. They are said to be invincible, though how they stand up against the zombie dragon’s blue flames remains to be seen.

Earlier this year, 1600 Pennsylvania Ave underwent cosmetic changes, including gold curtains and gold walls installed on the second floor residence. Gold is a symbol long revered in our culture; gaudy as a design aesthetic, intoxicating to those who purchase it. It’s preciousness makes it the perfect divisive symbol, separating the few who afford it to the rest who cannot.

This weekend was ripe with divisive symbols: a doubling down on the transgender military ban; the pardoning of a racist sheriff to appeal to a small in-group of supporters; promoting a new book by another sheriff, one notorious for his department’s handcuffing of pregnant inmates and for using his position to allow evangelicals to proselytize members of local government. All this while one of the country’s largest cities is victim to historic flooding. I’ve read a number of insufferable memes about the “greater meaning” of Harvey, but suffice it to say that rain is not symbolic to the people running from it.

If the story isn’t relevant it has no impact. Many viewers treat Game of Thrones as a form of escapism, a Sunday evening break from the world, which is a trend that grew up with cinema and television and existed previously in novels and town soothsayers. Yet you don’t have to look very hard to see the show’s symbolism. Did you miss Bran warging into Longclaw? Understandable. Missing an entire golden army hired to keep Dear Leader’s political and financial investments safe, though, is to have checked out of the process entirely.

Last week I wrote an article on the psychological profile of the Alt-Right. Professed members and a comparison group answered an extensive survey about political, social, and moral quandaries. Most revealing is not dissension between groups. The agreements the sides share is more relevant. Everyone expressed at least some level of distrust of the government and the economic forces ruling this country. We are all suspicious of the gold bearers.

Instead of uniting in our shared disdain of and oppression by financial forces, our insulas throb in disgust over what those Others think. So long as this is the case, real progress is unforeseeable, outlandish or not. We’d rather unite in our mutual love of symbolic fantasy worlds like Westeros. When it comes to our shared responsibility of making this world work better, though, that remains a fiction so few believe possible.

This Wolf–Rayet star is known as WR 31a, located about 30 000 light-years away in the constellation of Carina. The outer nebula is expelled hydrogen and helium, while the central […]