For those of us who follow politics, we’re used to commentators referring to the President’s low approval rating as a surprise given the U.S.’s “booming” economy. This seeming disconnect, however, should really prompt us to reconsider the measurements by which we assess the health of an economy. With a robust U.S. stock market and GDP and low unemployment figures, it’s easy to see why some think all is well. But looking at real U.S. wages, which have remained stagnant—and have, thus, in effect gone down given rising costs from inflation—a very different picture emerges. For the 1%, the economy is booming. For the rest of us, it’s hard to even know where we stand. A recent study by Porch (a home-improvement company) of blue-collar vs. white-collar workers shows how traditional categories are becoming less distinct—the study references “new-collar” workers, who require technical certifications but not college degrees. And a set of recent infographics from CreditLoan capturing the thoughts of America’s middle class as defined by the Pew Research Center shows how confused we are.

Before we go on, America has historically liked to think of itself as a classless society. As a result, referring to people as “lower class” or “middle class” feels vaguely (okay definitely) insulting. Rest assured that in this article, we’re referring only to income level and not to a person’s value.

All infographics in this article are by CreditLoan.

To identify what income level  qualifies as “middle class,” Pew uses a formula: A household is middle class if its income is anywhere from two-thirds to twice the median U.S. household income. In 2016, the last year for which there’s complete data, that ranges from about $45,200 to $135,600.

The indefiniteness of the numbers is due to variables specific to where one lives, how many family members there are, and so on. Pew offers a cool online calculator that can tell you what class you’re in based on these details.

On average, the lower class goes up to $42k, and the average upper-class income starts at $125k. (The very wealthy and the 1% are in a world of their own in this schema.)

What do most people see as the middle class?

So, grouping respondents into their current class, a Pew survey of 1,027 people revealed just where they believed the income-class boundaries are. Upper-class inhabitants believed the middle class began $30k higher than it does and that it extended all the way up to $275,875. People in the lower class had the most accurate view, getting the lower dollar threshold right and overshooting the top by only a little. And actual middle classers? They thought the middle class went all the way up to $351,028, which Pew considers comfortably upper-class. 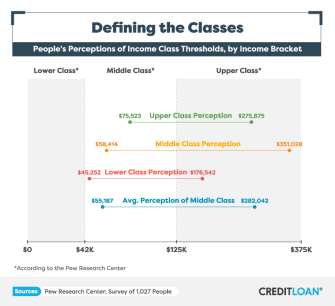 What class did you think you belonged to?

This one’s interesting, mostly because of the notions held by upper-class types. Of the upper class, 86.4% of them self-identified as belonging to the middle class! Is this modesty/embarrassment, or do they cower in the face of the super-rich, among whose ranks they may aspire to be? 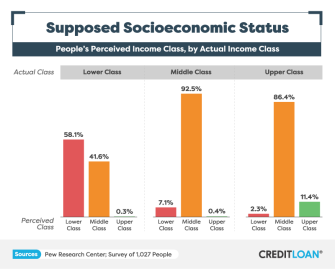 Speaking of aspirations, nearly half of lower-class respondents erroneously think of themselves as middle class.

And how do we feel about that?

Pew asked everyone outside of the upper class how they felt about being in the category with which they identify. Have a look at a classless view of attitudes grouped by raw income level at the top of the image. See a pattern? We do: The more money you make, the more satisfied you are (at least with your income). 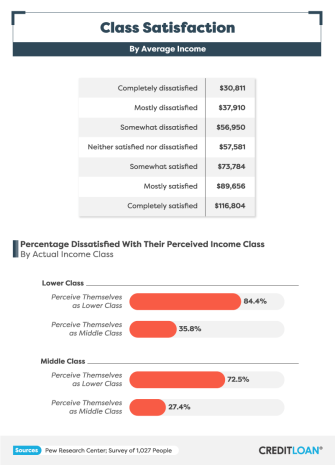 And so, not surprisingly, those who self-identified as lower class were largely unhappy about it, while far fewer self-described denizens of the middle class were displeased about their lot.

And the odds of moving up in the world?

Well, people were pretty evenly split on this throughout the lower and middle class. Lower-class respondents were slightly more pessimistic than optimistic, while middle-class folks were the other way around. Slightly. 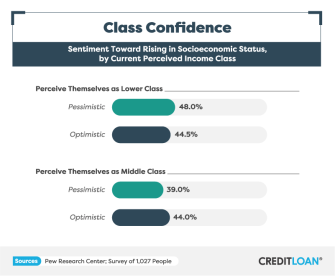 How secure does the middle and upper class feel?

In an alarming reminder of growing income inequality, a majority of people in the middle and upper classes are downright fearful that they won’t be able to remain at their current income level. 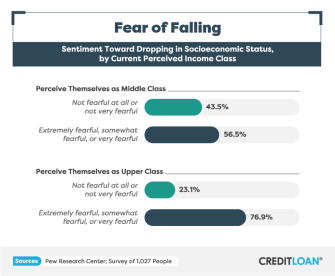 Slightly more middle-class respondents, 56.5%, are worried that they’ll wind up in the lower class, but the shocker is how anxiety-ridden upper-class people are. A whopping 76.9% of them are afraid their lofty status will prove to be only temporary. This may speak to the gap between the upper class and truly wealthy we noted earlier and may suggest a rampant level of imposter syndrome. Small-minded middle- and lower-class people may take some perverse satisfaction in this reminder that money doesn’t necessarily equal happiness. But as we compete for what’s left after the 1% have grabbed their 40% of U.S. household wealth, the rest of us could probably all stand to be a bit nicer to each other.

In Turkey, Darwin is being removed from textbooks

Some parts of the world are going backward right now. Where will it leave us?