The shooting at Marjory Stoneman Douglas High School in Parkland, Florida last week reignited a longstanding debate about gun control in the U.S. This kind of back-and-forth has become virtually guaranteed in the wake of each mass shooting. It’s become so commonplace that the NRA even has a playbook that outlines how it responds in the media after high-profile shootings.

But this time, some survivors are sending a message of “enough is enough” to lawmakers in Washington by planning nationwide marches and school walkouts for gun control.

The students, who are working with activist groups, have so far scheduled two events: the National School Walkout on March 14 and the March for Our Lives on March 24. Both events seek to push lawmakers to act on gun control measures, though it’s not clear yet exactly what kinds of laws the students and activists hope to pass.

In any case, some of the students feel that lawmakers aren’t doing all they could to prevent mass shootings. Emma Gonzalez, a senior at Marjory Stoneman Douglas High School, addressed a crowd attending a gun control rally in Fort Lauderdale, Florida on Saturday:

President Donald Trump didn’t mention gun control measures on Wednesday when he addressed the shooting at Marjory Stoneman Douglas High School, but he wrote on Twitter the day before:

“No child, no teacher should ever be in danger in an American school. No parent should ever have to fear for their sons and daughters when they kiss them goodbye in the morning.”

Some researchers say there’s a causal relationship between the number of guns and the amount of violence in an area.

In the U.S., there’s an apparent correlation between gun ownership and gun deaths across the 50 states, as this chart from Mother Jones illustrates: 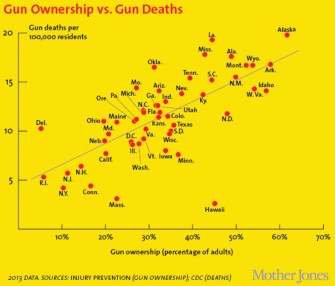 In 2016, researchers conducted the largest gun control study ever by analyzing the results of 130 “high-quality” studies on gun control measures in 10 countries over 60 years. The team found that more restrictions on guns resulted in fewer deaths.

“Across countries, instead of seeing an increase in the homicide rate, we saw a reduction,” lead researcher Julian Santaella-Tenorio from Columbia University told Zack Beauchamp at Vox.

Santaella-Tenorio said countries that passed several gun laws at once tended to see more drastic reductions in gun-related deaths. As Fiona Macdonald at Science Alert noted, these “overhauls” tended to include:

The research might be clear, but what’s not is whether the protests will sway the large portion of Americans committed to a more absolute interpretation of the Second Amendment – especially when students use absolute language like Marjory Stoneman Douglas High junior Cameron Kasky did at a recent rally:

“My message for the people in office is: You’re either with us or against us.”

Still, his message is bound to get some major attention.

“We are losing our lives while the adults are playing around,” he said.

Visit the March for Our Lives website for more information.

Related
The Learning Curve
Why do high IQ people stagnate in their careers? Emotional intelligence
Research suggests that emotional intelligence is more vital for success than IQ.
The Present
Even in the age of AI, some problems are just too difficult for computers
Computers are growing more powerful and more capable, but everything has limits
The Future
How the metaverse will revolutionize K-12 and higher education
Imagine going on a tour through the human circulatory system as a tiny cell. That is just one example of education in the metaverse.
Starts With A Bang
Ask Ethan: What are white holes, and do they really exist?
In General Relativity, white holes are just as mathematically plausible as black holes. Black holes are real; what about white holes?
Life
Strange life forms create an “alien” ecosystem in an abandoned uranium mine
Slimy biofilms made up of bacterial and eukaryotic life forms have taken over an abandoned, flooded uranium mine in Germany.
Up Next
Surprising Science
Why Hitler and other Nazis thought the world was really made of ice
Hitler and other Nazis were fond of a strange theory that the world was made of ice.