Facebook co-founder Chris Hughes earned nearly half a billion dollars after working at the social media giant for several years. His story could be seen as evidence that the American dream is alive and well. But according to Hughes, it was “nothing but a lucky break” and an indication there’s something fundamentally unfair about the structure of the U.S. economy.

“I think the American dream is safe to say if not dead it’s on life support,” Hughes told Big Think. “It’s this idea that if you do well you can get ahead in life and if you have family and kids they can perhaps do a little bit better than you did. And what we know by the numbers is that the median wages in this country hasn’t budged meaningfully in nearly 40 years, and yet the cost of living has increased by some counts by up to 30 percent.”

Hughes thinks the U.S. can fix that with a simple and radical change to the tax code, one that would raise taxes to 50 percent for those who earn more than $250,000, and give every working adult who makes less than $50,000 a monthly tax credit of $500, creating an annual income floor of $6,000.

“That’s not enough money to live on, but it is a massive amount of money in the lives of many working people in our country,” Hughes said on a recent episode of the Interesting People in Interesting Times podcast.

Hughes said it’s not quite universal basic income as a policy, which he said is “unaffordable, it’s redistributive in a negative direction, and it’s not what most Americans want.” Rather, it’d be similar to the earned income tax credit that rewards low- to moderate-income working Americans, particularly those with children. This social dividend, as Hughes called it, could be funded by taxing things like data or carbon.

Of course, that’d require a massive rollback of Trump’s tax reforms. But Hughes argues his plan would only cost Americans “just a bit more than the total cost of the Trump tax bill,” reasoning that the spending habits of lower- and middle-class Americans do more to energize the economy. 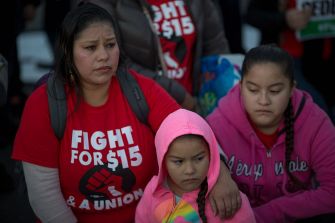 McDonald’s restaurant employees rally after walking off the job to demand to demand a $15 per hour wage and union rights during nationwide ‘Fight for $15 Day of Disruption’ protests on November 29, 2016 in Los Angeles, California. (Photo by David McNew/Getty Images)

“If you put $100 in the pockets of someone who’s working hard to make ends meet they’re going to spend a lot of that money, most of that money on things like childcare, housing, health care wherever their bills are the highest,” Hughes told Big Think. “You give someone who is in the one percent an extra $100 they might spend one or two, but the vast majority of that money is going to get parked in a bank account and not really become part of the productive economy.”

Big tech should also play a role in reshaping the American economy, according to Hughes.

“We all create immense amounts of data,” Hughes said on the Interesting People in Interesting Times podcast. “Not just your Facebook post, but your phones know where you are physically, your Fitbit knows your heart rate, your calendar knows where you’re going to be. The amount of data we’re creating is of historic proportions. And the profit margins of the Big 4 and of a whole host of companies are also historically high. There is an opportunity to say: Our collective data is powering these profits, we should all share a little bit in the upside. You could ask these companies to pay a small tax into a sovereign wealth fund and have that be distributed as a data dividend. A check to every single citizen as a recognition of the value they’re creating.”

Americans seem to be split on universal basic income. A 2018 survey issued by Northeastern University and Gallup showed:

Silicon Valley leaders like Elon Musk, Mark Zuckerberg and Sam Altman have also expressed support for the idea in some form.

“I think we’ll end up doing universal basic income,” Elon Musk told the crowd at the World Government Summit in Dubai in 2017. “It’s going to be necessary.”

The reason it might be necessary is because Musk and his Silicon Valley contemporaries are rapidly creating technologies that will likely displace a massive chunk of the workforce in coming decades. A universal basic income, as Jathan Sadowski wrote in The Guardian, could become a consolation prize for workers replaced by A.I.

It all begs the question: How would the rest of society begin to regard big tech if that happens?

That existential anxiety could partially explain why Y Combinator, an American seed accelerator in Silicon Valley, is running its own universal basic income experiment.

“The motivation behind the project is to begin exploring alternatives to the existing social safety net,” Elizabeth Rhodes, the research director for Y Combinator’s UBI project, told Quartz. “If technology eliminates jobs or jobs continue to become less secure, an increasing number of people will be unable to make ends meet with earnings from employment.”

Related
The Present
Radical idea: Redraw the U.S. map as a nation of city-states
While cities drive national economic growth, their political geography means they cannot effectively deal with inequality, poverty, and other socioeconomic problems.
The Learning Curve
Why do high IQ people stagnate in their careers? Emotional intelligence
Research suggests that emotional intelligence is more vital for success than IQ.
The Present
Even in the age of AI, some problems are just too difficult for computers
Computers are growing more powerful and more capable, but everything has limits
The Future
How the metaverse will revolutionize K-12 and higher education
Imagine going on a tour through the human circulatory system as a tiny cell. That is just one example of education in the metaverse.
Starts With A Bang
Ask Ethan: What are white holes, and do they really exist?
In General Relativity, white holes are just as mathematically plausible as black holes. Black holes are real; what about white holes?
Up Next
Strange Maps
Despite what Trump suggests, America still is an export superpower
America is the world’s #2 exporter – and that makes trade wars everything but “good and easy to win”