Two decades after Antioch College, a small liberal arts college in Ohio, was ridiculed on “Saturday Night Live” for its policy of requiring students to obtain verbal consent from potential partners before initiating or escalating a sexual encounter, California has adopted a law requiring that all college campuses within its borders adopt similar measures. The new legislation is a positive development, but the concepts driving it are more complex than first meet the eye.

The new law is designed to address the scourge of sexual violence on college campuses, a problem that has grown so widespread it is the target of a new White House campaign, “It’s On Us.” Kyle Lierman, a White House official, lays out the statistics:

Studies estimate that one in five women is sexually assaulted while in college. Most often, the act occurs in her freshman or sophomore year, usually by someone she knows. And only 13 percent of rape survivors report their assault. The culture of violence and silence at our college campuses contradicts everything we stand for as a country.

The Obama administration has produced a slick video featuring celebrities like Jon Hamm, Questlove and Kerry Washington to raise awareness about campus sexual assault and promote the campaign. Have a look:

“It’s On Us” asks everyone to take the following pledge: 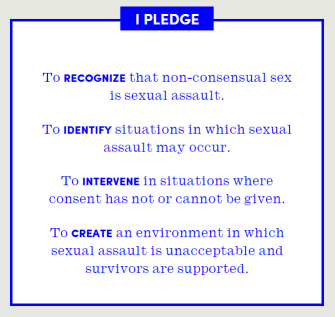 The key term here, found in the first and third goals, is consent. Unlike the new California law, though, the president’s website takes no position on what constitutes consent or how it can be signalled or withdrawn. To “consent” to sex is, put simply, to agree to have it. In the past, date rape standards have usually held that “no means no,” a rule that requires the non-consenting party to take it on himself, or, more often, herself, to refuse. The other party to the sexual encounter would then be obliged to stop any advances. But with the rise of sexual assault on campus, many colleges have switched to a model of “affirmative consent,” a requirement that both parties clearly indicate their desire to participate before any activity begins.

The idea has its root in social contract theory, the body of political philosophy building the legitimacy of government on the agreement of the people. John Locke, the 17th-century British political theorist whose ideas influenced the American founding fathers, was more thorough than most in parsing various types of consent. His schema applies surprisingly well to the question of consent and college sex.

“Men being, as has been said, by nature, all free, equal, and independent,” Locke wrote, “no one can be put out of this estate, and subjected to the political power of another, without his own consent.” Submitting to the authority of a state is not exactly like agreeing to sex. Intimate relationships are, one hopes, mutual—not “I agree to give up my personal independence and let you have your way with me” affairs. Yet the language of consent can carry a whiff of agreement to subordinate oneself, despite the insistence that both parties are equals in a sexual relationship. It is almost always the woman whose consent is at issue, though both partners are, formally speaking, required to give it.

The question then becomes which model of consent makes the most sense for colleges wishing to decrease the incidence of sexual violence in the dormitories. Locke distinguishes two types:

There is a common distinction of an express and a tacit consent…No body doubts but an express consent, of any man entering into any society, makes him a perfect member of that society, a subject of that government. The difficulty is, what ought to be looked upon as a tacit consent, and how far it binds, i.e. how far any one shall be looked on to have consented, and thereby submitted to any government, where he has made no expressions of it at all. And to this I say, that every man, that hath any possessions, or enjoyment, of any part of the dominions of any government, doth thereby give his tacit consent, and is as far forth obliged to obedience to the laws of that government, during such enjoyment, as any one under it; whether this his possession be of land, to him and his heirs for ever, or a lodging only for a week; or whether it be barely travelling freely on the highway; and in effect, it reaches as far as the very being of any one within the territories of that government.

In the realm of politics, express consent—an explicit agreement to enter political society, whether via an oath or a written pledge—makes you a full member of the polity. Tacit or implied consent—somehow showing your agreement not to oppose the government—does not. All tacit consent obliges you to is to abide by the law, not to join together in perpetuity with your comrades. When we push this conceptual framework under the covers, the “no means no” standard matches up to tacit consent: an indication to a partner that you aren’t objecting to his sexual advances if you don’t tell him you object. The California “yes means yes” standard, then, opts for express consent. By insisting that its colleges evaluate questions of sexual violence using the express model, California acknowledges how easy it is for power imbalances in the bedroom to lead to rape. It sees, appropriately, that mere tacit consent—a supposed agreement that is not expressed but simply interpreted as such by the person making the sexual advance—does little to quell assault.

Still, there is some ambiguity in the new California requirements. Things get murky about here:

(A) The complainant was asleep or unconscious.

(B) The complainant was incapacitated due to the influence of drugs, alcohol, or medication, so that the complainant could not understand the fact, nature, or extent of the sexual activity.

Someone who is asleep or unconscious lacks the ability to give affirmative consent to sex: that much is clear. But provision (B) introduces a troublesome grey area. College sex often takes place when one or more of the partners are under the influence of alcohol or drugs. When does this influence amount to “incapacitation”? If you’re so drunk that you pass out, you are without a doubt unable to offer affirmative consent. But we already knew that; provision (A) covers it. So what if you’re just a bit tipsy? You’re probably fine to say “yes” to sex. But what about cases between the extremes: you’ve had a few beers and are drunk but not passing-out-drunk? Does the new California policy make it impossible for you to have sex without worrying about rape charges?

With these and other knotty problems, the new rules for college sex in the Golden State may wind up having only a minor legal impact. But if the news coverage and debate over SB-967 makes college students more sensitive to the problem of sexual violence and more aware of their role in preventing it, Gov. Jerry Brown’s signature this week will not have been in vain.

Related
Neuropsych
Psychology studies that go viral are likelier to be bogus
A new 20-year analysis of over 14,000 psychology studies finds that a study’s media coverage is negatively linked to its replicability.
The Future
How a device transmits radio waves with almost no power
Apart from the energy needed to flip the switch, no other energy is needed to transmit the information.
The Present
Radical idea: Redraw the U.S. map as a nation of city-states
While cities drive national economic growth, their political geography means they cannot effectively deal with inequality, poverty, and other socioeconomic problems.
The Learning Curve
Why do high IQ people stagnate in their careers? Emotional intelligence
Research suggests that emotional intelligence is more vital for success than IQ.
The Present
Even in the age of AI, some problems are just too difficult for computers
Computers are growing more powerful and more capable, but everything has limits
Up Next
Exploring the Shipwrecks of Lake Huron’s Thunder Bay
The website for the Thunder Bay National Marine Sanctuary features an terrific interactive exploration of the region’s many wrecks.